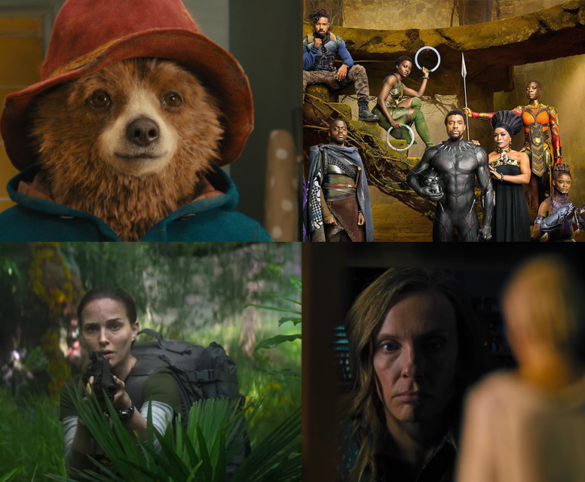 Welcome to InSession Film’s new monthly Oscar Watch! As the summer movie season starts winding down, the other movie season will start coming upon us, the Oscar season. Over the next couple of months, film festivals like the Toronto, Telluride and others will start showcasing the rest of the films that will be competing for various awards including the ultimate prize, Best Picture of the year. While there is still a lot of uncertainty in the race within the current moment, we can, based on what has been seen in theaters and most trailers, we are starting get a general jest as to what we could see come Tuesday, January 22nd, the morning of the Oscar nominations.

The first couple of the months each year can be a little rough with next to nothing coming out due to the previous year’s award season coming to an end. While many audiences around the world already saw this film is 2017, American audiences were given a taste of what could be a dark horse for this year’s Oscars in Paddington 2. The irresistibly lovely sequel about the adorably clumsy bear was a big player at last year’s British Academy Awards, or BAFTA’s as they are called. The film could also compete in costume, art direction, make-up categories but it’s best shot could in the Best Supporting Actor field for Hugh Grant’s devilishly charming performance as the villain Phoenix Buchanan. The film is one of the highest reviewed films of the year and could play well if viewed on screeners later in the year.

February brought us some more interesting films to take a look at within the Oscar race. Annihilation, director Alex Garland to Ex Machina, came out with most high praise for his adaption of the Jeff VanderMeer best-selling novel. The films visuals could be a player again for Garland, considering Ex Machina was the winner for Best Visual Effects for 2015, as well as it’s sound design. The performances and Garland’s direction are strong within the film but the only awards the film could compete for at this point outside the technical awards is the adapted screenplay race, though do look for Gina Rodriquez to be on some critics lists for Supporting Actress at the end of the year.

The other major player from the second month of the year was probably the biggest film of the year and could very well be the biggest Oscar player we have seen so far in Ryan Coogler’s superhero epic, Black Panther. Not only is was this film received with massive praise by audiences and critics, it has become a cultural milestone in not just its genre but in film history. With Marvel and Disney already coming out and saying that they will push this film during the awards season, the sky is the limit in terms of what the nominations could be. The film could compete in almost every technical category, as well as Adapted Screenplay, Best Supporting Actor for Michael B. Jordan’s remarkable performance as the villain Eric Killmonger, and as well as Best Director for Coogler. Many also tend to forget that this is Coogler’s follow up to Creed, an Oscar player with 2015. And while Sylvester Stallone was the only nomination for that film, many believed Jordan and Coogler were snubbed of nominations for that film. Marvel will look hard to push them along with the film, though no superhero film has ever been nominated for Best Picture but I believe that at this moment, history could very well be changing in 2018.

March brought us only minor films within the awards race. Disney gave us A Wrinkle in Time, a film that’s best chances are in costumes and possibly special effects. The Death of Stalin and Thoroughbreds represent two movies with strong scripts destined for screenplay nominations throughout the awards season, especially at the Gotham Awards and Independent Spirit Awards. Isle of Dogs gave us our first real contender for Best Animated Film but beyond that, Wes Anderson’s follow-up to The Grand Budapest Hotel will most likely fall short of any other Oscar love considering how forgot that film became. Then there was Ready Player One, a film that was visually stunning and not much more, which is sad to say considering its person behind the chair, Steven Spielberg.

John Krasinski’s silent, horror-thriller A Quite Place kicked into theaters at the beginning of April as a wonderful spring surprise. Riding off the heels of Get Out being nominated last year, Paramount Pictures hopes to turn its box office horror hit into a loud contender for its awesome sound design, tense lead performance from Emily Blunt and inventive direction at the hands of Krasinski. The Rider hopes to take its impressive showing from the Independent Spirit Awards from last year and turn it into a full contender this year ala The Hurt Locker, with Chloe Zhao being a possible dark horse for Best Director. You Were Never Really Here showcased yet another powerhouse performance from Joaquin Phoenix, who is very much in the Best Actor race again. Disobedience gave us two fantastic performances from Rachel Weisz and Rachel McAdams as conflicted, forbidden lovers. The trick about those two performances will be which one runs in lead and which one runs in supporting but either way those strong performances speak for themselves. And then there was the other film from Marvel, Avengers: Infinity War, a film that doesn’t have the Oscar potential of Black Panther but could be a player within those technical categories including visual effects.

The month of May was slim pickings in terms of award season films, with RBG being the first real film that could compete in the documentary field and Tully being an awards vehicle for Charlize Theron’s performances as the lead character. But one film could emerge as a contender from this month in Paul Schrader’s First Reformed. Schrader’s faith vs science opus is his best script in decades and a career defining performance from Ethan Hawke, this film could very well have the legs to gather the acting and screenplay nominations it deserves.

Hereditary kicked off a jammed packed month of June with a divisive horror thriller with a bone chilling performance from Toni Collette that is a dark horse for Best Actress consideration. The Incredibles 2 gave us Pixar’s entry into the animated race, and Hearts Beat Loud gave us our first real contender in the Original Song category. American Animals could be an Editing contender if it makes hay at the smaller award shows but seems to be a player for mostly Indie Spirit awards. Leave No Trace could get Ben Foster a nomination ala Viggo Mortenson for Captain Fantastic in 2016, in a performance that is about a father trying to raise his daughter off the grid. But the film that has taken over this month is Won’t You Be My Neighbor?, the Mr. Rogers documentary director by Morgan Neville, a previous Oscar winner for his film 20 Feet from Stardom. Not only is it the front runner right now for the Best Documentary Oscar but it could easily have an outside chance of becoming the first documentary of being nomination for Best Picture of the year.

The month of June was also a massive dumping grounds for trailers that will by for Oscar attention. First Man (Damien Chazelle), BlacKkKlansman (Spike Lee), A Star is Born (Bradley Cooper), The Old Man and the Gun (David Lowery), Beautiful Boy (Felix Van Groeningen) and Widows (Steve McQueen) all gave us great first looks of what is to come, with many more trailers coming within this month. Like I said earlier, it’s still too early to talk about frontrunners and who will be taking the gold, but based on what has been presented so far, it’s going to be one hell of a fall race for the gold.