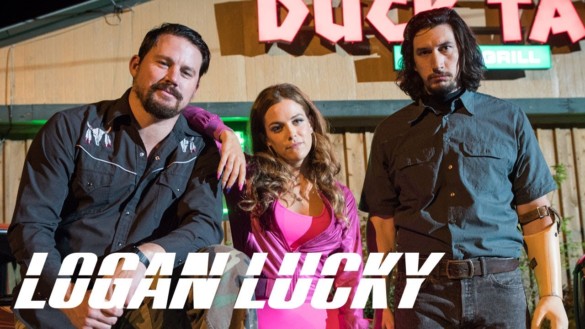 Summer 2017 has arguably been the best we’ve seen this decade for movies, and perhaps of the century so far as well. While we didn’t love Guardians of the Galaxy Vol 2 as much as everyone else, it kicked off the summer very well for most people. We also saw the likes of Wonder Woman, Baby Driver, Spider-Man: Homecoming, War for the Planet of the Apes, Dunkirk and Detroit, all films that range from good to really great. Additionally we saw some fantastic indie films this summer such as It Comes at Night, Okja, A Ghost Story, The Beguiled, The Big Sick and for many Lady Macbeth. The summer still has a few week’s left with some promising films that could only amplify this notion, one of those being Steven Soderbergh’s Logan Lucky.

I am a big fan of Soderbergh overall and the fact that he came out of “retirement” for this film is beyond exciting to me. Indeed, that’s exactly why Logan Lucky made my Top 10 most anticipated films for the entire year. Soderbergh is a director that has a wide range, which is what I love about him, and he’s great at operating in various spaces. He’s made some though-provoking films that I endlessly adore – Solaris and Out of Sight for example – but equally he’s rendered some of the most fun I’ve had in a theater. Ocean’s Eleven and Magic Mike are two of the funnest movies I’ve experienced in a theater. Ocean’s Eleven in particular could not be more pertinent to Logan Lucky, another film centered around a heist.

This time though, Soderbergh is forgoing the vibrant elegance of Las Vegas, and instead Lucky is taking us to North Carolina and the world of NASCAR. That isn’t to say anything negative about that setting, but rather it’s just very different than the Vegas aesthetic, and personally I’m very excited for that shift. There’s something about that premise – a heist at a NASCAR race – that is refreshing and full of potential. And in the hands of Soderbergh? Yeah, this could be special and perhaps the best way to end the Great Summer of 2017 (for movies anyway).

One thing that is certain in a Soderbergh film is that it will feature a great cast. Well, Logan Lucky is absolutely tapping into that fact is some fascinating ways. This film will feature an unrecognizable Daniel Craig, Channing Tatum, Adam Driver, Riley Keough, Katie Holmes, Seth MacFarlane, Katherine Waterston, Hilary Swank, Macon Blair, and even Jeff Gordan makes an appearance. So, that cast is pretty alluring and I’m excited to see how they work together here. In particular, I’m very excited to see Craig, Tatum and Driver operate in this setting and the chaos that comes as a result. Good lord this is going to be a lot of fun.

What about you? Are you as excited for Logan Lucky as I am?

Here are other titles coming to theaters this weekend: