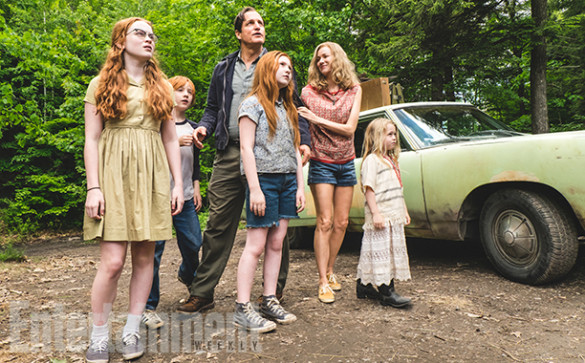 Synopsis: A young girl comes of age in a dysfunctional family of nonconformist nomads with a mother who’s an eccentric artist and an alcoholic father who would stir the children’s imagination with hope as a distraction to their poverty.

The Glass Castle is a minimalistic emotional story that is rather heartwarming. With fantastic performances from a brilliant ensemble, Destin Daniel Cretton once again proves that he understands how to utilize multiple actors in a limited setting. Hot off the success of his indie film, Short Term 12, Cretton has now solidified himself as an intimate filmmaker. The film does have a few flaws here and there but all in all, The Glass Castle makes for a satisfying drama piece.

Based upon the novel by the same name, The Glass Castle tells a coming of age story of Jeannette (Brie Larson). Jeannette is forced to raise herself and her siblings while traveling all over the country with her dysfunctional parents Rex and Rose Mary (Woody Harrelson, Naomi Watts). The novel is based on the real life events of Jeannette Walls and the film is adapted with palpable detail. The story is masterfully crafted on the film format but it does have a few humps here and there.

Instead of being told like a typical biopic the film jumps back and forth between Jeannette’s childhood, teen years and her current adult life. Instead of going from one point in her life to another, Cretton moves the film around constantly making it feel much more alive. This film succeeds admirably on keeping its audience interested in its characters and the deeper message at hand. Cretton never takes the focus off of the relationship between the characters for a second making the film all the more enjoyable.

Though the film may be a great character study it does lack in its screenplay in a few areas. Some of the jokes don’t land as well as intended and some moments feel a bit too fabricated or awkward. Even though the energy is kept up through a majority of the film it’s these small moments of disconnect that bring you out of the moment. Despite the screenplay being a bit rocky it does not hinder the overall message of the film. We do receive these moments of disconnection or over saturation but the emotional center of the movie remains perfectly intact.

One thing that this film solidifies for Cretton is that he is one of the best ensemble directors working. He completely understands how to utilize multiple characters with multiple personalities and mix them all together in one big boiling pot. Each character has a different vibe or energy about them and it makes the film much more layered. Instead of a bunch of different actors acting under the same umbrella, Cretton gives each of these talented actors the chance to showcase their strengths. Brie Larson is incomparable as always, Woody Harrelson gives one of his best performances in recent memory and Naomi Watts delivers another methodical nuanced performance. Each actor in this film plays into the emotional core of the movie and that is a fantastic approach to something as emotionally depth as this.

The Glass Castle has a strong emotional center that is ultimately catered by its brilliant characters. Cretton proves that he is not a one hit wonder with this film and he tells Jeannette Walls’ story on an immensely effective level. The Glass Castle may not be a film that will stand the test of time but it definitely is one to not kick to the curb. It may not be a groundbreaking or life changing film but it definitely is emotional and heartfelt.

Hear our podcast review on Episode 234: