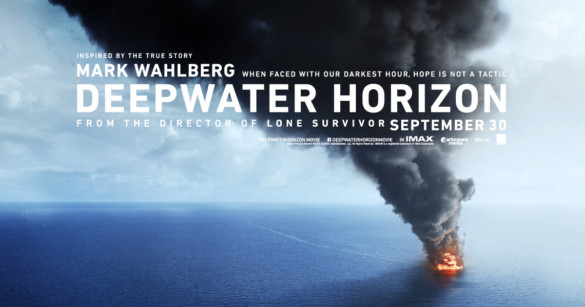 This weekend on Episode 189 we’ll be discussing Peter Berg’s latest film, Deepwater Horizon, starring Mark Wahlberg. Berg is clearly not the best director working today, but he has made some entertaining films over his career. Friday Night Lights is legitimately a very good film, if you ask me, and it’s easily Berg’s best film to date. In fact, I’d go as far to say that it’s one of the best football movies I’ve seen. However, after that Berg’s filmography becomes rather interesting. Personally, I’m a big fan of Lone Survivor but I’m willing to admit that the final act of that film is a big mess. I’d argue the first two acts of Lone Survivor are riveting and emotionally very stirring. It’s subjectively some of my favorite filmmaking from Berg. Additionally, the first half of Hankcock is also fun to watch. On Episode 181, I actually had drunk Hancock as an honorable mention when we discussed movie villains. I love Will Smith in the first half of that film in his hysterical drunk-rage. The second half of Hancock is ridiculous and flawed to say the least, but the first half is entertaining enough and laid the foundation very well for that premise. The Rundown has some fun moments as well but the rest of Berg’s resume after that is mediocre at best.

With all of that said, while Berg isn’t a director I get up for, he is someone who knows how to conjure entertaining scenes that can move you at a basic movie level. Deepwater Horizon is a film that on paper should serve Berg well in that manner. My major concern for that film, is that the story behind it is more than action and silly humor. Deepwater Horizon is a tragic story that left behind huge ramifications. There is serous drama here that should be depicted with diligence. Is Berg capable of handling that well? Sure, but I’m a bit dubious.

The other concern is Mark Wahlberg. Now, I’m a big fan of Wahlberg, however I haven’t seen serious Wahlberg in awhile. He was serviceable in Lone Survivor, but as stated above, this story will need to feature a different Wahlberg. I’m sure Wahlberg’s personality will seep through in the beginning, but can he carry the film’s emotion by the end? I don’t know yet, especially given the trajectory of his career over the last five years.

For what it’s worth, I’m a fan of this combo on paper. In theory, this could work with the pieces it has. Would I have chose them to tell this specific story? Not at all, but this could still work. I haven’t read any early reviews but have heard some rumblings that it’s not bad, which is promising. So here’s to hoping that all of my fears are put to rest this weekend. What about you? Are you excited for Deepwater Horizon?