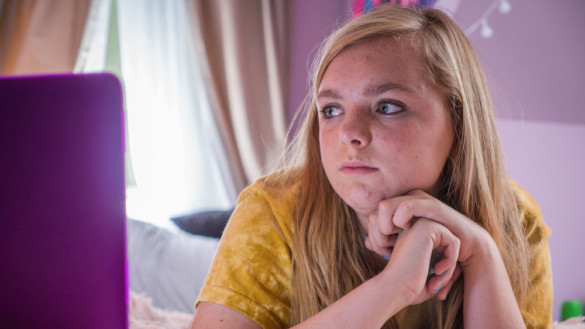 The month of July started to bring some sunlight to the 2018 Oscar race. For this month’s Chasing the Gold, I will be looking back on the month of July, as well as the first week of August, and looking at the films, trailers, festivals and buzz surrounding this year’s Oscar race. While there were some films that could make hay in some smaller categories, it was news from the festivals and trailers galore that brought the intrigue level to where it is at today, showing us what’s going to be in play for those gold statues at the beginning of next year.

The month of July didn’t really bring the Oscar race any Best Picture contenders but it did bring a lot of candidates for Original Screenplay into the fold. There is Boot’s Riley’s wildly zany social satire Sorry to Bother You, that has a premise and a twist that makes it one of the most original and crazy screenplay’s of the year, very much making it 2018’s The Lobster, a film that didn’t get a lot of love in other categories other than original screenplay. Then there is the screenplay for Blindspotting, a film very similar in its message like Sorry to Bother You, but handles it way better in my opinion and tells it a little subtle, and with actors Daveed Digss and Rafael Casal writing the film and already doing a lot of good press for the film, they will make an interesting duo if they hang around at the end of the year. And the last original screenplay contender is Eighth Grade from first time director Bo Burnham, which is one of the more realistic screenplays written in recent memory about adolescence and what it truly means to grow up in this modern generation. Burnham could easily ride the coattails of Lady Bird from last year and land himself his first Oscar nomination. But rest assure, if these three films don’t get nominated at the Oscars, I have a feeling they will be on a lot of critics lists at the end of the year and most likely the Independent Spirit Awards as well.

The only other film of mention from this month is for Mission Impossible: Fallout, which is the sixth film in arguable the best spy series going on within the genre currently. Looks through the history of the Oscars, it is amazing that with all of the great special effects and action set pieces these films have put together, it’s really strange that the series has not been nominated for any Oscars. But with the amazing achievement Fallout is, I wouldn’t be surprised if for the first time in the series, we finally see a very well deserved Best Visual Effects nomination for the film and Ethan Hunt and the gang break into the Oscar conversation. But while there weren’t a lot of films that sparked Oscar talk, there were plenty of trailers from the fall that came out that showed extreme promise.

Towards the middle of the month, we were given our first looks at a couple of films starting with The Favourite (Yorgos Lanthimos). The Favourite is Lanthimos’s follow up to The Killing of a Sacred Deer and The Lobster, and tells the story of Queen Anne (Olivia Coleman) and her friendships with two women played by Rachel Weisz and Emma Stone. Lanthimos’s films are considered to be out there for a lot of people, but I quite enjoy his films, and The Favourite is supposed to be his most accessible film to a mass audience to date with powerhouse performances from all three ladies mentioned above. Think The Lobster meets Stanley Kubrick’s Barry Lyndon and that is the kind of film we will get in the fall.

Mary Queen of Scots is another film about Queens from England only in a much different vine and tone than the previous film that was discussed. The film follows Mary (Saoirse Ronan), Queen of Scots and her cousin Queen Elizabeth I (Margo Robbie) and their rivalry turned war between the two of them for control of the thrown. With both actress coming off their best performances of their young careers in Lady Bird and I, Tonya, Ronan and Robbie could be looking for Oscar gold this time around after walking away last year empty handed. But the film could be more than just the two lead actresses, it’s also being written from a screenplay by Beau Willimon, who is the creator of House of Cards and wrote the play that he later adapted into the movie The Ides of March, which landed him an Oscar nominated back in 2011. The production design of the film looks incredible as well as the make-up and costumes, which easily look like contenders even if the film is subpar. The only cause for alarm for this films is that it is being directed by a first time director Josie Rourke, but with a lot of first time director having great outings over the last couple of years at the Oscars, Rourke will get the benefit of the doubt from me till the film comes out.

Shortly after these two trailers were released, we were given another first look trailer, this one being Joel Edgerton’s coming of age drama Boy Erased. The film, which is based on a true story, follows the life of Jared Eamons (Lucas Hedges) that comes out to his very conservative, religious parents (Nicole Kidman and Russell Crowe) and is send to a gay conversion camp to avoid being shunned by everyone he knows. Edgerton, who is also in the film as the leader of the camp, adapted the screenplay, so he pulls triple duty and based on the trailer, this is a big step up from his last film The Gift. This feels like one of those films of the Oscar season that could play well considering its based on a true story and has a very timely message about the treatment of members of the gay community within our modern political era. It could very well be this year’s Lion, only much better.

And though this trailer didn’t appear in the month of July, by the time this piece comes out, we would have seen the first looks at Barry Jenkins Moonlight follow up, If Beale Street Could Talk. The film is adapted from a novel by author, civil rights activist James Baldwin and is about a woman who scrambles to prove her fiancé innocence of a crime he didn’t commit while also carrying their first child. While early buzz has been questionable about the film, I tend to not believe most of that noise and trust that Jenkins will be giving us a good if not great follow up to Moonlight. Based on the trailer, Jenkins isn’t missing a beat in terms of direction and the cinematography looks absolutely amazing. The film is leaning on a cast of mostly unknowns in the leads, with Kiki Layne playing the lead role, but her mother is being played by Regina King, who could be just like Naomie Harris and Mahershala Ali, who were supporting actors in Moonlight and end up with Oscar nominations and a win for Ali. If there is anything you can learn from the last time people underestimated a Barry Jenkins film, don’t count it out in the awards race and that’s why I expect it to be a front runner across a lot of the major categories.

Within the next two to three months, we will be seeing the films above plus a plethora of others that will premiere at film festivals around the world, starting in Venice, Italy at the end of August. We know most of the slate that will be playing their, films like Paul Greengrass’ 22 July, The Coen Brothers The Ballad of Buster Scruggs, Damien Chazelle’s First Man, Alfonso Cuaron’s Netflix film Roma. Other films that are being included are The Favourite, Luca Guadagino’s Susipria, Mike Leigh’s Peterloo, Jacques Audiard’s The Sisters Brothers, and our every ones first real look at Bradley Cooper’s A Star is Born.

Telluride comes next with a slate that includes Jason Reitman’s The Front Runner, Marielle Heller’s Can You Ever Forgive Me? and David Lowery’s The Old Man & the Gun. Though most of the lineup hasn’t been announced, it’s not going to be a secret if most of the films from Venice and the next festival, Toronto, go to Telluride. In Toronto, we will get to see If Beale Street Could Talk for the first time along with Felix van Groeningen’s Beautiful Boy, Steve McQueen’s Widows, Dan Fogelman’s Life Itself, along with many more because not all the films have been announced yet. By this time next month, we are going to start getting a clear look at what’s going to be our nominees once we start getting toward the end of the year.

So with many trailers coming out, premiers at film festivals on the horizon, and films coming up with August that will be coming to theaters like Spike Lee’s BlackkKlansman, Oscar Watch is going to be getting really busy quick. That is why before the festivals come out, you can come back and read my early Oscar predictions article here on InSession Film and see how wrong and right I am once the dust settles at the end of the year. Look for that within the next two weeks and keep track of the Oscars and the films above because most of them are going to be around and talked about a lot at the end of the year.