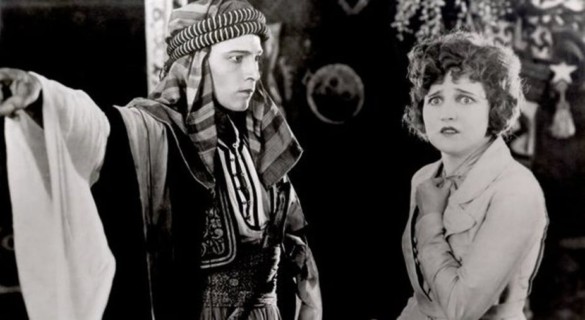 When a film begins with an inter-title that informs you that Arabs live in “Happy ignorance that civilisation has passed them by” you know that it was written by some extremely racist individuals. The world was a very different place in 1921 but even by the standards of the era, this feels exceptionally wrongheaded and hateful. It helped to popularise the trope of the ‘Latin Lover’ and was sold on the star power of matinee idol Rudolph Valentino. He was a heartthrob at the time and his appeal came from the fact that he was more dangerous and aloof than other leading men of the era. Alongside the athletic, jolly Douglas Fairbanks, he appeared to be an entirely different breed of leading man. He was tormented and mysterious, so naturally, girls decided that they wanted to mother him and tend to his every whim. This film weaponises his persona in order to support several racist myths about Arabs being dirty savages and it is very difficult to stomach the intolerance presented on screen.

He plays Sheik Ahmed Ben Hassan, a half-British, half-Spanish man who was adopted as a child by the Sheik of Biskra. He’s enigmatic and exotic but finds himself growing weak in the knees when in the presence of Lady Diana Mayo, Agnes Ayres. She’s a spoilt heiress who loves the idea of being independent. When she is kidnapped by the Sheik, she begins to experience Stockholm syndrome and falls in love with her captor. He is delighted by the fact that she loves him and after he survives a serious injury, they declare their intention to be together forever.

The film is horrifying on two levels, as it exploits racist stereotypes while also reinforcing harmful ideas about women wanting to be kidnapped and roughed up. In the first case, it supports the idea that white people naturally assume positions of power within every society because they are physically and mentally superior in every way. For colonialists, this sets up the fantasy of two white Europeans having unlimited rule over a non-white population of people who essentially have to serve as slaves. It’s almost funny that the American makers of the film express such disgust over the cultural practice of arranged marriage, when this practice still existed in Britain. There is no awareness when it comes to the double standards that they apply and they glamourise the idea of Mayo, a young girl who makes poor decisions all the time, being able to ‘civilise’ the native population. She is going to introduce all of her English ways to this society and wipe away all traces of Algerian culture. They seemingly haven’t considered the fact that the Sheik is also European and could presumably Europeanise this society but I suppose there is also a streak of anti-Spanish racism that runs through this film. Only lily-white English people should be able to lead.

The whole idea of a ‘Latin Lover’ is also rather disturbing. Most of the appeal of this stock character is meant to be derived from the fact that they are exotic. In recent decades, they have become more overtly sexualised but this film also attempts to excite audience members with the prospect of the Sheik violently ‘taking’ the woman who is under his care. He barely touches her but we are meant to sense that he is more violent and uninhibited than the effete British men that Mayo has been spending time with. There are so many contradictions posed by the way that this wraps up, as there is never a scene where he harshly smooches her or touches her in a vaguely risqué manner. Everything remains above board and, by the end of the film, she has tamed him and turned him into a carbon copy of the British men that had bored her so greatly. It seems as though things had to end this way because audiences wanted to flirt with the idea of doing something risky before reassuring themselves that their way of life was best and there was no use in trying to understand other cultures. It was easier to get a voyeuristic thrill out of briefly observing their practices and then destroying them in order to increase the amount of power that you hold.

I find myself reflecting on the reactionary politics that The Sheik (1921) supports because there isn’t much else to reflect upon here. This exists as a curiosity piece in modern times because it can tell us about racism in the 1920s. When we consider True Heart Susie (1919), we think about Lillian Gish’s transcendent performance and D.W. Griffith’s unexpected turns towards a minimalistic style of filmmaking that favoured immersion in a pastoral environment over spreading a message about the human condition. We tend to consider the sexism that mars the eventual statement that it makes about Susie’s contentment with small town life, but it seems insignificant in the face of the technical mastery and entertaining performances that are on display. When George Melford’s direction is decidedly unremarkable and Ayres feels like a low rent knock-off of Gish, there is no way to defend this on artistic grounds.

Are AFI voters really backwards enough to see this as romantic? This is one of those times where I want to give them the benefit of the doubt and accuse them of having not seen most of the nominated films. From a moral standpoint, it is far more tolerable to imagine them selecting the film because they were faintly aware of Valentino’s legendary reputation. If they sat through this and still thought it was a film with any value, I think we should be asking more questioning about the taste level of this organisation’s members.