Classic Review: ‘Once Upon a Time in the West’ Is A Visual Feast 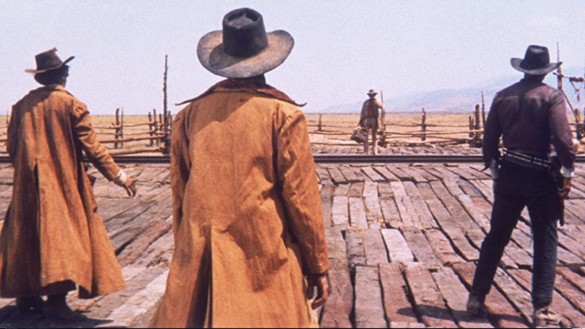 Synopsis: Frank (Henry Fonda) decides that he wants to strike it rich by building a railway station. In order to do this, he needs to murder the husband of Jill McBain (Claudia Cardinale) and find a way to get her to sell her land to him. His plans are thwarted by Cheyenne (Jason Robards) and Harmonica (Claudia Cardinale).

Once Upon a Time in the West (1968) represents Sergio Leone fully moving into the mainstream. He was given a massive budget, legendary movie stars, and the imprimatur that comes with the backing of Paramount Studios. It has many of the virtues of his earlier, slightly rougher work, but it does lose some of the charm that came through in For a Few Dollars More (1965). I’m not claiming that Leone’s previous efforts were tiny little indie movies that had been made by a down on his luck director with no resources. I am aware of the fact that Italian cinema became wildly popular on an international scale in the 1960s, and the films in the Dollars trilogy did receive a lot of attention in the United States. However, I think it’s impossible to argue that Once Upon a Time in the West does have more of a Hollywood flavor to it.

As soon as American icon Henry Fonda appears on screen, as the villainous Frank, we can sense that Leone wants to make a statement about the brutality of American Capitalism. He also plays around with a prototypical hooker with a heart of gold, known as Jill (Claudia Cardinale), but he seems far more intrigued by the charismatic villain that he has created. The feud between Jill and Frank arises from the fact that he murdered her husband, Brett McBain (Frank Wolff), in order to stop McBain from building a railway on the land that he owns. Frank was under contract to Mr. Morton (Gabriele Ferzetti) and is a ruthless, cold-blooded killer who is purely driven by a desire for power and money. He tries to pin his crimes on Cheyenne (Jason Robards) and then chooses to purchase McBain’s land for himself. Cheyenne and Jill have to team up to take him down and they also find an ally in the form of Harmonica (Charles Bronson), a mysterious bandit.

It has a typical Western set-up and its plot serves as a framework to display the highly stylised imagery that Leone always specialised in. His real genius seems to be in staging shots that are so improbably extravagant and over the top that you find yourself wanting to laugh, before admiring the audacity of a man who would dare to create something so unabashedly dramatic. He doesn’t care about realism, and he wants to imprint his own style on every frame of the picture. It’s an approach that often pays dividends because he is so fiercely committed to it. Maybe there were a few too many scenes in which he provided extreme close-ups of Fonda’s eyes, but I can’t deny the fact that there was something splendorous about the sight of so many endless vistas. Nobody quite captures wooden planks in the way that he does, or manages to make sweating temples look oddly beautiful. If you’re a fan of his directorial trademarks, Once Upon a Time in the West will offer the opportunity to gorge yourself on his stylistic flourishes.

I think he put a foot wrong in casting Robards as Cheyenne. This is because there is a difference between movie stars and actors and, on a meta level, we expect actors of a certain stature to face off against other performers who are in their league. Fonda is well cast as the terrifying villain with a fearsome reputation. The role allows him to play off of his typecasting as a representation of all that is good and wholesome about America. His standing as one of the most beloved and respected leading men of Hollywood’s Golden Age also gives him a degree of gravitas that Frank sorely needs. Because Fonda is such a monumental figure, you need to have him face off against an equally iconic star. If Cheyenne had been presented as a bum who isn’t quite tough enough to put up a fight when Frank attacks him, it might have made sense to cast a non-movie star. When Cheyenne is presented as a gunslinger with enough chutzpah to go toe to toe with his enemy, you do need somebody who is on Fonda’s level.

I am fully aware of the fact that Robards was a highly respected actor with two Academy Awards under his belt, appearances in several iconic films and a legendary stage career. I’m not knocking his abilities as a performer or implying that I’m not aware of the high regard that he was held in by industry professionals and fellow actors. I do think it’s fair to argue that he never quite became an iconic leading man. He made appearances in respectable, awards bait films that weren’t necessarily seen by the masses, and showed up as a character actor in supporting roles during the last three decades of his career. Perhaps audiences members felt some fondness for him, but they wouldn’t have automatically recognized one of his physical features in the way that they would notice Fonda’s eyes. He doesn’t have the screen presence or the gravitas to stand up against the reputation that his co-star possesses, so scenes in which it should have felt like two titans of cinema were clashing, end up feeling disappointingly flat.

This isn’t quite the masterpiece that it could have been. It does have its flaws and appears strained in ways that The Good, the Bad and the Ugly (1966) doesn’t. At times it becomes difficult to ignore the fact that there are so many missed opportunities on display. All of this doesn’t take away from the wonder of being transported into the world that Leone creates. It is rare to find a Western that is so immersive, even when the characters aren’t as complex as they could be.