Movie Review: ‘Kate’ is yet another half baked, poorly executed John Wick imitation 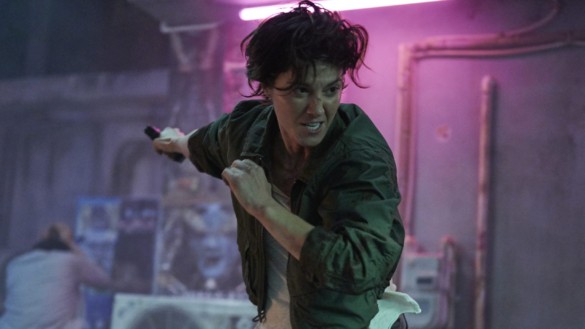 Synopsis: A female assassin has 24 hours to get vengeance on her murderer before she dies.

An assassin who is not a completely amoral sociopath is only as good as her story. That’s the biggest failure of Kate is that the story fails to be anything more substantial than a vehicle for action sequences. Screenwriter Umair Aleem attempted to give heft to the journey, to express a thoughtful idea about family both found and biological but fails. Without a significant backstory or any major flashback, there is no deep investment in the characters. Everything is glossed over, touched with a feather, and used to fuel the idea behind the rampage.

The most aggravating aspect is that we never learn why or how or who. We can suppose. We can put it together from throwaway comments and the climax of the film, but why? The best trapping of this subgenre of action film, the convoluted, often silly, codes, rules, and lingo of assassins is all missing from Kate. It’s pared-down like a small business instead of a network. Why not then have more conversations, more details about who these people are, why they’ve been, apparently, context from a throwaway line, been hunting people connected to the big boss for several years? It’s unknown and unimportant to the filmmakers. Instead, there are fight scenes.

The fight scenes are intriguing, but they’re nothing beyond what has been done before. Director Cedric Nicholas-Troyan comes from a visual effects background and it’s clear he has an eye for movement. In one of the first fight sequences, Nicholas-Troyan and director of photography Lyle Vincent create a way for their camera to access more space as the scene commences. Being in a restaurant with paper sliding doors effectively opens the space, or breaks open the space, creating the illusion of continuous takes and spectacularly brutal violence. Many of the fights have this immersive component, tricking us with every movie goers favorite trick, the tracking shot. The one absolutely poor decision, but for safety reasons understandable, is that the one car chase in the film is entirely computer generated. It looks hokey and is only dramatic because it’s the onset of Kate’s symptoms.

If Kate is at all watchable it’s because of Kate herself, Mary Elizabeth Winstead. Winstead exudes the emotional vulnerabilities of Kate while also kicking a lot of tail. She’s ferocious in her action scenes, stoic when faced with an emotional burden, and when needed, she’s got that intense vulnerability. The depth of backstory missing from the script is in the performance. Winstead knows this woman inside and out. Her best scene is when she finally confronts the man she’s hunting.

Kate is at her lowest, she’s dismissed her young partner, she’s only got a small amount of stimulants left and she’s ready to face death. Yet, she does what she’s failed to do for most of the film. She sits and she listens. Kijima, played by the incredible Jun Kunimura, himself of the masterfully expressive eyes and, practically concrete, stone face, tells her how it all really is, what she really is, and what family means. It’s a scene of quiet amidst the violence and it’s the scene that makes you feel the most. As you watch it dawn on Kate that her whole world was shattered long before she was poisoned you get to see that emotion Winstead has been holding in reserve. Winstead brings the gamut of emotion with just her face in a beautiful tapestry of rage, grief, and physical pain.

Kate is the kind of movie you put on in the background while you fold your laundry. For the most part, it’s a revenge film that makes only a little sense as to why the person is seeking revenge. It’s got some cool action scenes, a couple of good performances, but it’s not immersive. It’s not one that will keep you glued to the television. It’s the one that will make you nod to yourself when it’s over and then forget it as soon as you find the next new thing to watch on Netflix.