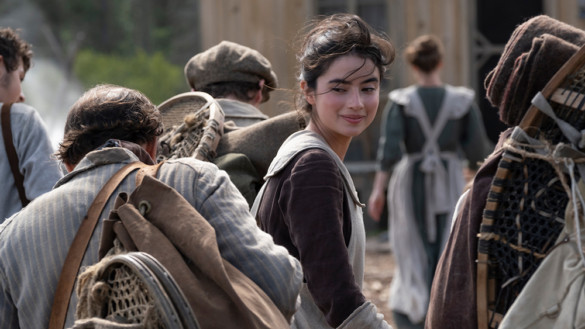 Synopsis: Story of a young woman having to choose between three suitors promising each a different life.

A romantic story presents a young woman being wooed by three different prospects. This brief premise was enough to make Maria Chapdelaine one of my most anticipated films of TIFF 2021 and practically the year. Unfortunately, it is with a heavy heart that I report that this adaptation of Louis Hémon’s book turned out to be an utter disappointment, flirting with attractive ideas and instead offering a lethargic story with little longing and excessive periods of boredom.

The film, written and directed by Sébastien Pilote, follows Maria Chapdelaine (Sara Montpetit) as she reunites with her family in the Northern part of Quebec in the 1900s. Set against a tumultuous and drastic landscape, the movie exposes the beautiful views offered by snowed forests in the winter, blooming flowers and trees in the summer, and the unforgiving isolation that comes from being cut off from everyone else.

Because of the taciturn ways of the patriarch of the family, Samuel (Sébastien Ricard), the family has relocated constantly and now lives apart from any kind of civilization, keeping to themselves during the long winters. Still, Maria manages to get the attention of three suitors: François Paradis (Émile Schneider) is a former neighbor that moved around and now works as a fur trader; Eutrope Gagnon (Antoine Olivier Pilon) is their current and only neighbor, a timid and quiet shadow that is always loyally present; and Lorenzo Surprenant (Robert Naylor) is a factory worker that has moved to Massachusetts and rejects the country life.

While the film has a promising start with Maria and François sharing a furtive look during mass, this is one of the few precious moments of excitement and visual representation of physical interest between two characters. With a story that reminds of films such as Far from the Madding Crowd (Thomas Vinterberg, 2015) or Brooklyn (John Crowley, 2015), where love triangles (or squares) mark the tone and exhilaration of the story, it is amazing how little platonic longing and romantic eagerness is present in Maria Chapdelaine.

Instead, the film focuses too much on the family, their routine, and the superfluous conversations they have when they encounter friends and acquaintances. There are countless of meaningless and shallow interactions where family and friends talk about the weather, the isolation, and the joy of coming together. It seems that they get stuck in their good manners and there is no way for the story to move beyond this. The romantic potential surrounding Maria is side-lined to silent shots and the imagination of the audience wanting something dreamy to happen.

The first deception of the film is its title, giving the idea that the young woman will be the main character of the story. Instead, Maria remains a mystery, and her desires, interests, and expectations are never truly explored. Rather, the movie is more interested in Samuel and his wife Laura (Hélène Florent), who has given up the joy of being around people in the name of love for her husband and family. The camera follows the routine of chopping down wood and maintaining a peaceful life. At least the film successfully portrays the tedium of their lives.

Maria is portrayed as a young girl barely waking up to the expectations of her age. Her monosyllabic answers to the scarce questions thrown her way don’t help. How are we supposed to feel excitement or interest in her life if it is devoid of adventures, decisiveness, aspirations, or restlessness?

This issue is intimately linked to Sara Montpetit, actress who brings Maria to life. She gives a subdued and absent performance as the lead character and source of affection of three very different men. With a juvenile physical appearance, there is a clear mismatch between her and the three men vying for her attention. Her character is devoid of the personality and charisma that is needed in such a heroine. With her lack of presence, the love for actresses such as Mia Wasikowska (Jane Eyre, 2011), Carey Mulligan (Far from the Madding Crowd) or Keira Knightley (Pride and Prejudice, 2005) is instantly increased. Montpetit is just blank and flat.

For their part, the three love interests appear too little on screen to make a lasting impression (it took me half a film to recognize Mommy’s Antoine Olivier Pilon). Furthermore, the few interactions that they have with Maria are boring and muted. There are no clues as to why they would want to be with her and she with either one of them. The film expects the audience to believe in signs, looks, and possibilities that are non-existent. The tenderness of Emory Cohen (Brooklyn), the decisiveness of Matthias Schoenaerts (Far from the Madding Crowd), or the presence of Matthew Macfadyen (Pride and Prejudice) are sorely missed.

While the film slightly improves in its second half (it is more than 2h 30 minutes long), it is still devoid of emotions and expectations. A beautiful but solemn score by Philippe Brault maintains the film in a cold and formal tone that prevents the story of being enjoyable.

This film was the perfect opportunity to offer a new period piece that would allow us to sigh to expectant or suggestive looks, caressing hands, defying speeches, or tense dancing scenes. Instead, Maria Chapdelaine presented a boring story that stays short on its promise of romantic adventures (three suitors! The opportunities missed!) and dramatic encounters.