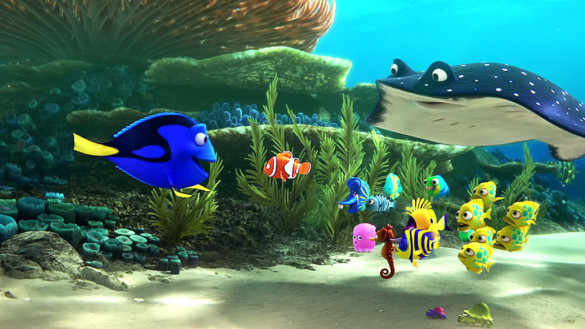 Just keep swimming, just keep swimming, happy Finding Dory week! When we launched InSession Film back in 2013, it wasn’t but a couple of months in when Disney/Pixar announced that they would be making Finding Dory, the sequel to the 2003 smash hit, Finding Nemo. Well, three years, 173 shows and even a Pixar Movie Series later and Finding Dory is finally here. Usually I’m not a big fan of spinoff films (looking at you The Conjuring universe, stop it!), it almost never works. Recently, we’ve seen the likes of Minions, The Penguins of Madagascar, Annabelle (speaking of) and who can forget X-Men Origins: Wolverine. That said, it has worked on some occasions, such as Puss in Boots, Deadpool and Creed being some great examples of the last few years. Overall though, most of them just don’t seem to work or add any value. I haven’t done the math but I’d estimate that almost 85% of the time, I’m not a fan of spinoff films.

That brings us to Finding Dory. The big difference here can be summed up in one word; Pixar. Now, I know the last five years haven’t been too kind to Pixar, outside of Inside Out (one of their best films ever) but it’s still Pixar. Specifically it’s Andrew Stanton at the helm for Finding Dory. Stanton not only directed Finding Nemo but also WALL-E and A Bug’s Life. He’s done some pretty great work, to say the least. Meaning, if you’re like me and not a fan of spinoffs, Stanton is a big reason to be excited for Finding Dory.

Another key factor for anticipating Finding Dory, and this is a result of Pixar’s incredible track record, is perhaps lowering your general expectation for the film. I have no idea how Pixar has continued to work at such a high level for as long as they have but at some point, even Michael Jordan had slumps or average games. Maybe it’s too much of us to expect a masterpiece each time out? I currently have Finding Nemo ranked #9 in my Ranking Pixar list and I think that film is at least an “A” if not an “A+”. I’m not saying we shouldn’t expect the best but it may be unrealistic to expect Finding Dory to be as good. It’s really hard to sustain that level of success and if Finding Dory is a little less than Nemo, that doesn’t have to be a bad thing. I think it’s okay to lower your bar just a little bit. Pixar has spoiled us.

All of that said, I’m excited for Finding Dory and I’m excited to see where this lands in Pixar’s filmography. Based off of the trailers, I don’t forsee this cracking my Pixar Top 9 but 10-15 are up for grabs. We’ll see soon enough.

What about you? Are you excited for Finding Dory?

Here’s what else is coming out at the box office this weekend:
Central Intelligence
Swiss Army Man (limited)
Tickled (limited)
The Last King (limited)
Clown (limited)