The Lost And Found World Of Pierre Étaix 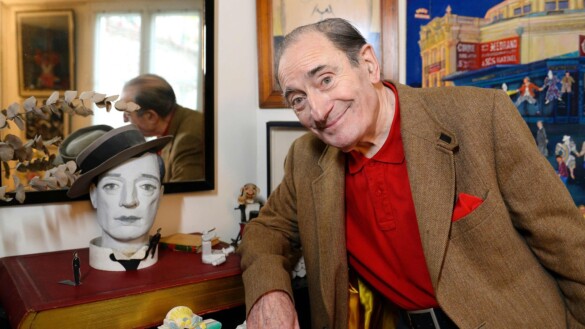 When Pierre Étaix died on October 14, 2016, aged 87, he was a figure who only just recently had a second life in film. For years, his movies were out of distribution and left in vaults to wither away until they were rediscovered and restored in 2009. Étaix was someone Jerry Lewis described as a genius and hired him for his aborted picture, The Day The Clown Cried. While he continued on as an actor and professional clown, Étaix’s films were almost forgotten because he only made a handful of short and full-length movies, even though he was an Oscar winner. But in those few movies he made, Étaixwas an amazing magician in clever comedy.

Similar to his contemporary, Jacques Tati, Étaixwas heavily influenced by silent films and the genre of slapstick. His love for Buster Keaton and Max Linder convinced him to get into comedy, first as a clown. Étaixtrained himself in playing several instruments including the violin, piano, xylophone, saxophone, and trumpet; while also becoming skilled in dancing, illustration, and gymnastics that were needed in the circus. Moving to Paris in the fifties, Étaix fell in love with Tati’s Monsieur Hulot’s Holiday and got himself hired to work for him in his next film, Mon Oncle.

After working as an assistant for Tati, Étaixwent on to perform at the famed Bobino Theatre multiple times while also getting acting roles for French TV and film. He then met writer Jean-Claude Carrière, who would become Etaix’s collaborator for the next decade. In 1961 and 1962, they would make two short features, Rupture and Happy Anniversary. For the latter, Étaixand Carriere would win the Academy Award for Best Live Action Short, a story about a man fighting through traffic and bad timing to get home to celebrate his wedding anniversary. They then went on to make his first full-length feature, 1963’s The Suitor.

Étaix utilized sound effects throughout his films to construct his gags with visual comedy, like his old boss, Jacques Tati. Instead of being dialogue-driven, Tati would push the story through physical action accompanied by strange noises that added a comedic effect to the scene. In The Suitor, he plays a shy man of wealth who is pressured by his parents to get married. While he falls in love with a pretty woman, she is a bit of a klutz, struggling with speaking French and getting easily drunk. The film received acclaim and Étaix was dubbed “the French Buster Keaton” by critics.

In 1965, he would make Yoyo, considered by many critics to be his greatest film. Paying homage to clowns everywhere, Étaixplayed the titular character who chooses happiness over wealth by getting married and becoming part of a traveling circus. As he gets older, Yoyo returns to the abandoned mansion he once grew up in and seeks to bring it back to its former glory. In the first act of the film, Étaixhonors the silent film by simply having no spoken dialogue and selective sound effects. He breaks the silence when the story cuts to 1929 and Étaix says, “And that’s when talkies were born!”

His final three films were As Long As You’ve Got Your Health, La Grand Amour, and the documentary Land of Milk And Honey. Released in 1971, it would be Étaix’s last film as it was panned critically for its satirical style, critiquing French society following the events of May 1968 when the country was at a standstill. It was withdrawn from theaters and Étaix never got another chance at making a movie again. In retrospect, the movie was daring because of how it held a very painful mirror to French views even after the near-revolution of ‘68 and is now seen as underrated.

For decades afterward, Étaix’s works were out of circulation, but not by his choice. Lengthy legal wrangling with multiple distribution companies who handled his films and neglected to preserve them became a cause celebre in the cinema world. Writers, actors, and directors such as Jean-Luc Godard, Terry Gillam, Paul Thomas Anderson, and Woody Allen signed a petition to the court demanding they find in favor of Étaix. In 2009, Étaix won the case and got back his movies. Only then were the films restored and re-released to the public, including by DVD and Blu-Ray.

While his directing career ended, Étaix still appeared in films as an actor but spent most of his time teaching tricks of the clown when he and his wife founded the National Circus School in 1973. Étaix enjoyed the rest of his life entertaining as Yoyo in costume, but the redemption of having his films shown to a new generation while he was still alive was the ultimate prize in a long and storied career. Thankfully, his work can now be seen anywhere (including the Criterion Channel) and the genius Jerry Lewis saw in Étaix can be experienced by everyone.