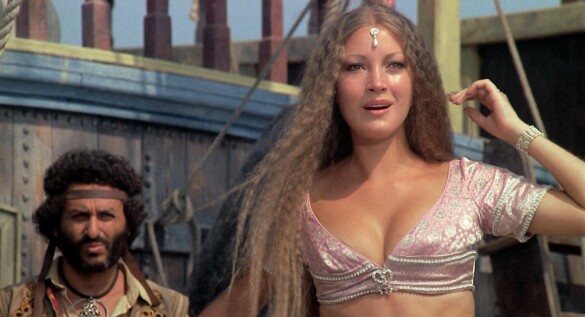 Anthony Andrews (Brideshead Revisited) and Ian McKellan (Lord of the Rings) join the resplendent Seymour in this spirited 1982 adaptation of Emma Orczy’s rip-roaring adventure with powdered pony tails, frocks, and frills. The feathered finery matches the over the top flirting, roguish charisma, and humor belying the serious guillotine action alongside candlelit color and whimsical locales. Without subtitles, the pompous who’s spying on whom plot could be confusing, and this 2 hours and 22 minutes may be dry to a contemporary audience unaccustomed to conversational intrigue. Fortunately, fencing and carriage chases add pleasant period action compared to today’s obvious CGI spectacles. Ridiculous inflection and bad poetry capture Andrews’ suave dual identity as our 18th century titular superhero in disguise fooling the young, dark haired, stuffy yet devious Sir Ian. The hammy subterfuge helps the aristocrats flee the French Revolution in a satirical reverse Robin Hood topsy-turvy. Being familiar with the history or book changes does help the viewing, however this remains a sweeping escapade inspiring viewers to seek out more of the literary excitement.

Sinbad and the Eye of the Tiger

Producer and stop motion special effects maestro Ray Harryhausen (Jason and the Argonauts) also co-wrote this third 1977 Sinbad picture with Beverley Cross (Clash of the Titans). Granted, the matte shots look poor. The baboon scenes are slow and other monsters feel hokey. Seventies zooms and quick intercutting are uneven as the action both attempts spectacle yet cuts corners in tough to see high seas photography and obvious blue screens for the cool Petra locales. The stop motion, however, is wonderful with fun miniatures and Minotaur automatons. Colorful sets, belly baring costumes, and jewels add the expected Arabian flair even if chiseled star Patrick Wayne’s (McLintock!) delivery is too California in a totally whitewashed picture. Some of the appropriated hairstyles on Seymour are also wrong, but we can overlook it thanks to her warm spirit and sense of fun here. Patrick Troughton (Doctor Who) is a bemusing wizard, too, and his beautiful daughter Taryn Power (The Count of Monte Cristo) falls for the prince on their fantastical journey. This installment is a step down from the magical fifties charm of The 7thVoyage of Sinbad. Dialogue is often muddled and the fanciful plot nonsensical, but the spells and enchantments make for an entertaining adventure.

Struggling playwright Christopher Reeve (Superman) becomes so enamored with the portrait of Jane Seymour’s 1912 stage actress Elise McKenna that he travels back in time to be with her. Unfortunately, time and McKenna’s ruthless manager Christopher Plummer (The Sound of Music) stand between them, and while I hate cliché romance movies, I adore this 1980 love story based upon Richard Matheson’s (The Twilight Zone) Bid Time Return. Paradox abounds yet we can suspend belief thanks to the realistic approach and intelligent questions posed. Was our Richard from the past or has this travel happened previously? Prophetic what ifs anchor their love as uptight Plummer fears Richard will ruin Elise yet she has somehow been waiting for him to arrive. The young, vital Reeve is a bittersweet, obsessed leading man. He’s awkward, be it past or present, belonging to neither as we root for his quest to succeed no matter how seemingly impossible. When we finally meet Seymour forty minutes into the film, the whirlwind romance is everything her photograph promised. Hats, gloves, and etiquette accent her charming delivery, beauty, and grace. The Grand Hotel and Mackinac Island locales match the turn of the century elan, and the award winning dresses are an eclectic mix of Victorian sheers and Edwardian effortless visualizing the sweeping, evocative John Barry (Dances with Wolves) score. Though at times sappy and today melodramatic, this time travel romance remains a must see.