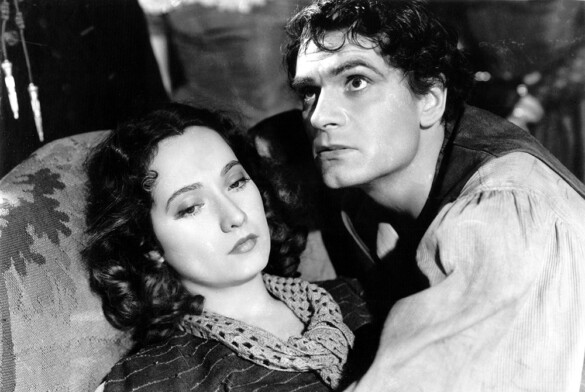 I might look upon William Wyler’s perfectly respectable adaptation of Emily Brontë’s ‘Wuthering Heights’ more favorably if it didn’t seem to fundamentally misunderstand the point of the book. It tries to twist a disturbing family tragedy about jealousy, greedy people who are obsessed with the British class system, into a dreamy romantic fantasy about a pretty girl who is torn between a bad boy and an upper class stiff. This reshaping of the narrative could have been successful if the screenwriters had made fundamental changes to the motivations of the characters. Rather than doing that, they kept in all of the unpleasant aspects of Cathy’s personality and refused to acknowledge the fact that she is in thrall to a classist system that severely disadvantages the man that she claims to love. In the novel, she is a complex character who struggles with all of the contradictions that come with being a wealthy British woman. In the film, she is a fuzzily drawn tart who messes around with two different for men for reasons that are never explained, before eventually becoming a suffering martyr. It makes no sense.

Charles MacArthur and Ben Hecht’s screenplay streamlines a story that is arguably at its most powerful when dealing with the trauma that the troubled relationship between Heathcliff and Cathy has wrought on their ancestors. MacArthur and Hecht choose to cut Catherine Linton out of the narrative and introduce a happy ending into a story that is so beloved because it presents such a bleak view of British society. As MacArthur and Hecht tell it, Cathy Earnshaw (Merle Oberon) is a sweet, beautiful upper class young woman who grew up at the Wuthering Heights estate. She grows up alongside her classist brother Hindley (Hugh Williams) and her adopted brother Heathcliff (Laurence Olivier). She develops strong feelings for her adopted brother and is excited by the dangerous, enigmatic air that follows him around. When she comes into contact with the wealthy Edgar Linton (David Niven), she is comforted by the idea of marrying somebody within her own social class. Heathcliff is the victim of classist taunts and Earnshaw would lose her social standing if she chose to marry him. Heathcliff leaves the estate after she chooses to marry Linton and unexpectedly returns several years later as a wealthy man. He attacks and mocks Earnshaw for many years but declares that he loves her when she falls ill and suddenly dies. Her ghost haunts him until the end of his days and they are finally reunited when he passes away as an old man.

The screenwriters reconfigured the story to strip it of most of its depth and ended up endorsing the classist ideas that the novel rejects. This version of the story is a female fantasy about being desired. Earnshaw is the prettiest girl around and every man in the area wants to marry her. She gets to entertain the affections of various suitors without being accused of being promiscuous or slutty. These men are driven wild by her innate sensuality and aggressively pursue her. This was a plot device that would have been very successful at the time, as the sexually repressed young girls that this film targeted would have been subconsciously thrilled by the concept of having multiple sexual or romantic partners. In the real world, they would have been judged for dating more than three young men before getting hitched and committing to a loveless marriage.

In the world of the film, Cathy is a peculiar mash-up between the Madonna and the whore. On one hand, she is as pure as the driven snow and sacrifices her own happiness by refraining from having an affair with Heathcliff. On the other hand, the film cleverly exploits the fact that Heathcliff is a rape fantasy come to life. American women in the 1930s were conditioned to believe that sexual desire was sinful and they were wrong to take an active role in initiating a sexual encounter. This might have been what led to the creation of the ‘rape fantasy’, a somewhat disturbing sexual fantasy that made sexually repressed individuals feel comfortable with the idea of having sex. If their sexual partner was the one who initiated sexual contact, by forcing themselves onto a woman and leaving her completely powerless and helpless, the women would not have to admit responsibility for their sexual desires. Heathcliff is depicted as a violent man who is ruled by his intense, passionate emotions and he often looms above Earnshaw, which makes him appear to be an overpowering figure. Olivier is made up to look like the villain in a German Expressionist horror movie, with his thickly applied mascara and caked on foundation. The film lets people in the audience flirt with the idea of danger, whilst absolving them of any ‘guilt’ for wanting to have sex with somebody who isn’t as bland as David Niven. It’s a problematic trope and it likely stopped women in the audience from interrogating the social conditioning that caused them to feel so afraid of sex.

It also fails to properly address the class-based themes that stand at the center of the novel. Brontë suggested that obsession with the British class system could destroy people and turn them into heartless individuals who were incapable of loving one another. Heathcliff realizes that Earnshaw is essentially a Capitalist creature who will always look down on him because he is not wealthy. When she rejects him in order to marry another upper classman, he is disgusted by her and turns her into an object in his mind. He believes that he can possess her if he becomes wealthy but he has lost the pure love that he felt for her before she abandoned him in favor of another suitor. If he did marry her, they would have an empty marriage that wasn’t built on the passionate emotions that marked the beginning of his infatuation with her. When he does become wealthy, he doesn’t even experience the hollow victory of winning her. The members of the upper class still view him as a nouveau riche loser who doesn’t deserve their respect. This makes him even more resentful and hateful and he descends into madness as he is forced to contend with the fact that a person simply can’t win if they are not born into wealth in British society.

The film seems less comfortable with the idea of criticizing classism. This is partly because, like so many others film from this time period, it admires the pomp and the pageantry of upper-class Britons. American filmmakers used British Imperialism and snobbery as a representation of glamour. Working class Ohioans were meant to aspire to act like a British nobleman, before ultimately accepting their place as lower-class plebs who would have to admire jewel-laden toffs from afar. Actively criticizing Britain’s unfair class system would shatter the sheen of glamour that Hollywood was so desperate to preserve. In almost every frame of Wuthering Heights (1939), you can feel the camera asks you to lick your lips over the sight of all of the expensive items that the Earnshaws and Lintons own. The film never really takes a hatchet to their way of life or their political beliefs. It is especially when abhorrent when the film encourages the audience to see the nouveau riche, Heathcliff, as a monstrous figure who doesn’t possess the refinement or class of the families that have generational wealth behind them. Rather than seeing through the classist myth and pointing out that people aren’t special for being born into a wealthy family, it believes in the myths propagated by the upper class. This means that its ‘message’ feels incredibly muddled. You are supposed to want Earnshaw to be with Heathcliff but, on some level, you are also meant to admire the class system that keeps them apart.

I know that many consider it unfair to penalize a film for being a poor adaptation of the novel that it is based on. Some believe that evaluation and analysis of literary adaptations should not involve comparisons to the source material because film is its own medium. I think that it is fair to argue that many literary adaptations are improved as a result of their deviations from the novels that they were based on. However, I think that the film version of Wuthering Heights feels poorly written and structured as a result of the changes that Hecht and MacArthur made. You can always sense that there’s something missing when it comes to Earnshaw’s characterization and you can never really understand the thought process behind the decisions that she makes. The film would have been so much better if it had embraced the fact that the characters are unlikeable and morally corrupt. As a soppy romantic drama about a physically ill dimwit who has to live without the man she loves, it doesn’t entirely work.

The screenplay is easily the film’s biggest flaw but it is so exceptional in other regards that it makes a case for itself as a production that is less than the sum of its parts. Gregg Toland’s extraordinary black and white cinematography creates a haunting, poignant effect. He understands the gothic spirit of the novel and hints at the darkness that lies at the heart of this story. Even when the score is insisting that this is just a run of the mill story about ill-fated lovers, Toland is able to convey the madness and hysteria of the characters. Olivier also succeeds in crafting a credible version of Heathcliff. His performance launched him into cinema superstardom and established him as one of the top male sex symbols of his day. He is suitably Byronic and handsome in the role but brings a level of intensity to his performance that is sorely needed. When compared to Oberon, who has all the charisma of a dead fish, he looks like the greatest movie star of all time. All of these elements combine to turn the film into a solid piece of entertainment. You still find yourself wistfully imagining what this could have been, but it never qualifies as a hot mess.