Movie Review: ‘Time Now’ Has a Dawdling Build That Crescendos, Thanks to Its Actors 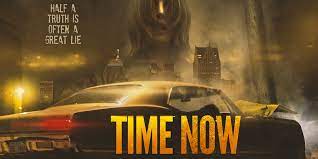 Synopsis: A young woman returns to her home city of Detroit to mourn the sudden passing of her twin brother. Upon meeting his eclectic group of friends, she discovers that his death is not what it seems and sets out to find the truth.

Whether it was intentional or not, Time Now seems to adopt the glumness of its characters. As a movie, it trudges along as if in a state of depression. In a way, this makes sense: A beloved person has died and this family is reuniting to mourn his abrupt passing. The directorial choice to cinematically mirror the mindset of one’s grieving protagonist is apt, definitely. It becomes a problem, however, once it’s clear that we aren’t going to be keeping up visually with the growth of the performances. The filmmaking remains stagnant and a smidge dull while the actors on screen begin sparking. Time Now is a mystery, yes, but labeling it a thriller is a far cry. Layers are peeled back and clues are discovered, sure, but the plotting is too torpid for its own good. The prize at the bottom of this Crack Jack box is the undoubtedly principal cast.

As Jenny, Eleanor Lambert is a steady force. Driven by the determination to solve her brother’s death, Lambert weaves a perceptible doggedness into Jenny’s grief. Emotionally wounded and riddled with regret, Jenny harnesses her pain and utilizes it to propel her forward into the dark underbelly of her hometown. But she’s far from bulletproof. Lambert tactfully identifies which quick beats to reveal the increasing number of chips in Jenny’s façade. With each successive checkpoint on her journey, she unfurls a bit little more and makes us wonder if/when she will pass a point of no return. Lambert commands more of the screen with each subsequent scene. The film concludes with an extended, devastating medium-close shot of Lambert that calls to mind the finales of Portrait of a Lady on Fire or Dangerous Liaisons, and she so thoroughly owns every square inch of the frame that it’s nearly impossible to glance away. Eleanor Lambert demonstrates that she’s a fervent actor with a deep well of soul to draw from.

Supporting Jenny’s story are two standout performers. First and foremost, we have Aussie genre goddess Claudia Black. Sci-fi fans know her best for playing Aeryn Sun on Farscape and Vala Mal Doran on Stargate SG-1, so seeing her play an earthling here in Time Now is quite a treat. As Jenny’s offbeat aunt Joan, Black offers a mix of much-needed charm and sagely wisdom. With her magnetic presence, she grounds the story in the effortless manner that only a seasoned thespian can. Then, acting as a dramatic foil to Jenny, we have Xxavier Polk’s mysterious Kash, a close friend of Jenny’s dead brother. Kash is character who may know more than he lets on at times and can therefore be intentionally difficult to read. Polk manages to communicate volumes with just a look and some prolonged stillness. He speaks of course, but Polk truly shines in the moments between the lines. These three performances at the center of the film help bolster the competent though sometimes apprehensive filmmaking.

Time Now repeatedly doubles down on one of my biggest indie pet peeves: the conscientious effort of turning every brand name product all the way around so as to quell a producer’s phobia of getting sued for any potentially unlicensed placement. Labels, of course, do not need to fully face the camera all the time; that would be equally off-putting. And I understand rotating a product in an actor’s hand in order to avoid “featuring” it. But when a scene is set in a bar—a business that sustains itself on the sale of alcohol—and every single bottle behind the bar in a wide shot (that does not highlight anything in particular) is backwards, the decision draws attention to itself in a bad way. Like, how are these characters, as consumers, supposed to know how to order a hypothetical drink? Situations like this tend to fall under “fair use” and are usually acceptable. However, I can conceive of why novice narrative film producers would feel the need to do this. (Greeking labels or just simply making your own are also valid options!)

As a whole, the filmmaking could’ve used a little more oomph. In a brief nightmarish sequence, we get a taste of what that could’ve looked like. Via Jenny’s unconscious psyche, we get a borderline demonic rendering of her guilt. Fantastic makeup effects dish out an aperitif for a meal that we’re ultimately not served. Whether this was due to budget/time restraints or rewrites I’m not sure, but I found myself waiting for the movie to return to that macabre place, and unfortunately it never really does. Spencer King does a perfectly okay job of telling this story, but if I’m being honest the reason to watch Time Now is for the actors. The unbothered pacing has a deliberately incremental build (as if they, the filmmakers, actively wanted the film to be called a “slow burn”), which has a tendency to test the patience of the audience. But the plot is not the main event here, anyway. The craft of Eleanor Lambert, Claudia Black, and Xxavier Polk are infinitely more arresting than the script they’re working with.