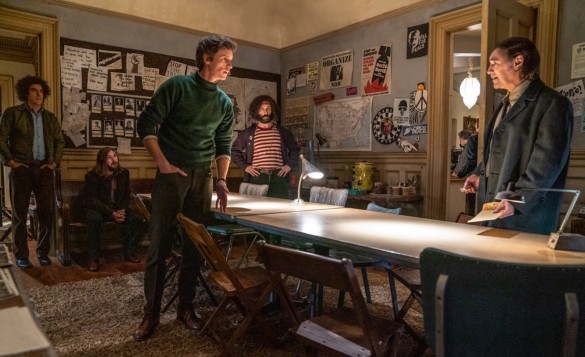 Netflix has finally unveiled the trailer for Aaron Sorkin’s The Trial of the Chicago 7, and first impressions are that it looks like a serious Oscar player.

In what is only Sorkin’s second directorial outing – after Molly’s Game – The Trial of the Chicago 7 features one of the most star-studded casts of the year, featuring a slate of multi-award winners and nominees. Academy Award nominees and winners include Michael Keaton, Eddie Redmayne, Mark Rylance, Frank Langella, and Sacha Baron Cohen, the latter of whom was nominated for his Borat screenplay but is yet to receive an acting nod. Could this be the versatile actor’s first?

The following is the synopsis for the upcoming drama as written by Netflix to accompany the trailer’s release:

“What was intended to be a peaceful protest at the 1968 Democratic National Convention turned into a violent clash with police and the National Guard. The organizers of the protest—including Abbie Hoffman, Jerry Rubin, Tom Hayden and Bobby Seale—were charged with conspiracy to incite a riot and the trial that followed was one of the most notorious in history.”

A perfect blend of courtroom drama and protest scenes, the trailer promises plenty of intensity and splendid performances from its cast. Cohen looks perfectly positioned to be an Oscar contender in the Best Actor category and looks to be one of the film’s main focal points. At the same time, Redmayne also looks to be doing some incredible work based on the brief emotional glimpses of his speeches. Strong could also be a big contender, but only time will tell which of the cast truly stands out.

It’s hard to catch all of the cast members in a first watch of the trailer, with the likes of Strong and Rylance featured only briefly toward the beginning. It is a teaser trailer after all, and the wait for Oct. 16 is going to be agonizing, especially for this movie lover who can’t get enough of courtroom dramas.

Sorkin’s directorial debut Molly’s Game was strong, and the screenwriter-turned-director proved that he has the ability to get the best out of his actors. Of course, Sorkin ranks among some of the greatest screenwriters in modern times; look no further than The Social Network and Moneyball for proof of that. If the screenplay for The Trial of the Chicago 7 is even half as good as those, then he’s a major contender in the screenplay category.

Other high profile creative names behind the camera include composer Daniel Pemberton and cinematographer Phedon Papamichael. Of course, there were rumors Steven Spielberg was once attached to the project as a director when Sorkin first wrote the screenplay in 2007, but plans were disrupted due to a strike from the writer’s guild. Given the relative success of Molly’s Game, Sorkin has proven that he’s more than up to the task of director, and the trailer has only built on the incredible Oscar hype it already has.

The trailer for The Trial of the Chicago 7 can be watched below, as published by Netflix. Feel free to share your own thoughts down in the comments below!