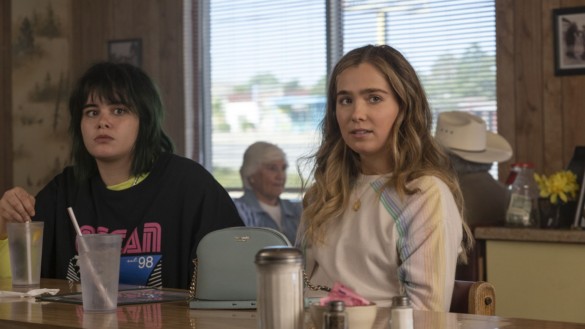 Synopsis: A pregnant teen and her former best friend embark on a road trip from Missouri to New Mexico.

I counted down the days for Unpregnant to arrive on HBOmax. Teenage women, who rekindle a lost friendship so they can travel across middle America to seek an abortion? This is a story that needs to be told, normalized, and mainstreamed–so count me all the way in already!! Usually, I cannot tolerate a plot where the main characters are trying to get to an end result, and everything derails them from it. However, this one is paced perfectly, full of adventure, and is right down funny and heartwarming along the way.

From the opening scene, there is zero time wasted to throw us into the plot: Veronica (Haley Lu Richardson) is mid-peeing on a pregnancy test stick. She accidentally drops the pregnancy test before she can see the results, and when it slides across the bathroom floor, it ends at the footsteps of her former bestie Bailey (Barbie Ferreira). We quickly discover that Veronica is the “perfect” one–she is always “on,” always prepared, responsible, and calculated, so she can hardly believe how she let herself get pregnant. Bailey is consistently herself from the moment we meet her, and she will never waver from that throughout the story. She is loud, bold, and fun.

Veronica meets with her current squad for a girls weekend, although she’s has already mapped out her weekend (literally and figuratively) to travel to Albuquerque, New Mexico, from Missouri for an abortion. Albuquerque, a quick 996 miles from her home, is the closest place where she can get the procedure done without a parent. Veronica leaves the girl squad to meet with her boyfriend and now baby daddy, Kevin (Alex MacNicoll), to break the news to him. He immediately has a ring on him and is ready to propose, somehow? It turns out he is a complete prick, who knew the condom broke the last time they had sex and kept the information from her. Veronica turns down his proposal (as she should) and heads to Bailey’s house to beg her to take this trip; she is Veronica’s only hope.

Bailey agrees to drive Veronica, of course, and this is where the adventure takes off. Along the way, the women have moments that range from hilarious, to emotional, to downright scary. Running from the cops in a stolen car? Check. Screaming and confessing a secret on a rollercoaster? Check. Kidnapped by a crazy pro-life family? Check. Flipping off the Missouri State Legislature for controlling women’s bodies? Check. Tasing a man who did them wrong? Check. Unpregnant has all of this and so much more.

Above all else, what makes this film so original and memorable is that it does not shy away from the abortion procedure. The decision to present the abortion as an experience to the audience that was peaceful, normal, and not scary was the most potent message the film presents. Unpregnant could have taken the approach of Veronica walking into the clinic, fading to black, and then cutting to the aftermath. No–instead, it shows you that an abortion is not taboo. That is precisely what the director, Rachel Lee Goldenberg, wanted the viewer to understand. The camera switches to Veronica’s point of view in the perfect moments to make us a part of the scene and delicately walks us through it. It can be seen, experienced, and normalized. A woman should be able to have an abortion and then eat nachos with her best friend afterward because it is her decision and hers alone.

This story was clearly made by women for women. Women have our own language, just like Veronica and Bailey do in this film; like, no, literally they have this weird, funny alien language that they taught themselves when they were children that they use to speak to each other at strategic points throughout their adventure and it’s actually hilarious. Besides that, though, women understand each other in ways that only we can. We don’t need anyone to try to understand our bodies, motives, and decisions. Women need to be supported, trusted, believed–because that is what matters most, and that is where Unpregnant shines.