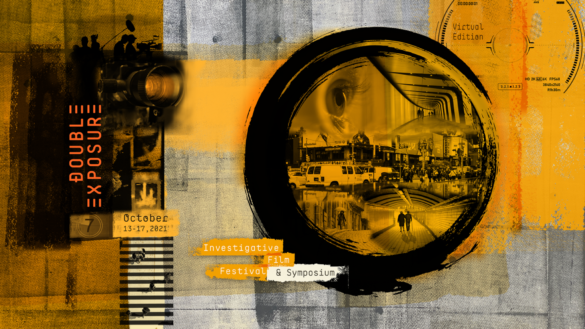 The Double Exposure Investigative Film Festival is not only a showcase of powerful nonfiction filmmaking but a highly useful opportunity to hone your journalism skills and learn from some of the best filmmakers out there. This is because the event has a film program selection and a Symposium. Let’s take a look at both components of DXIFF21 which will run in a hybrid format from October 13 through 17.

Since its inception in 2015, DXIFF has always boasted an impressive line-up of documentary films. In fact, except for 2017, every edition has featured at least one eventual Oscar nominee: The Mole Agent and Collective in 2020, The Cave in 2019, Of Fathers and Sons in 2018, Fire at Sea in 2016, and Cartel Land in 2015.

This year will most probably continue the tradition with the inclusion of two of the best documentaries of 2021: Elizabeth Chai Vasarhelyi and Jimmy Chin’s The Rescue and Jonas Poher Rasmussen’s Flee. The former just won the TIFF Documentary People’s Choice Award and follows the 2018 rescue attempts of a soccer team trapped in a cave in Thailand; the latter won the Jury Prize at Sundance 2021 and, through the art of animation, tells the life story of a gay Afghan immigrant now living in Denmark. Both are currently sitting at 100% in Rotten Tomatoes.

The Opening Night film is Sonia Kennebeck’s United States vs. Reality Winner, the story of Reality Leigh Winner, an NSA contractor who disclosed information about Russia’s involvement in the 2016 United States elections. This is another documentary with a perfect score on Rotten Tomatoes.

Another must-see film at DXIFF21 is Writing With Fire. Directed by Sushmit Ghosh and Rintu Thomas, this Indian documentary follows the journalists of a newspaper run by Dalit women, the lowest caste in India. It’s an inspiring doc that follows the tireless work of admirable and passionate women fighting to generate a positive impact in their community through the power of journalism. It won the Audience Award and Impact for Change awards at Sundance 2021, as well as numerous prizes throughout the year in events such as the Krakow Film Festival, Docs Ireland, Dokufest, and Blackstar Film Festival.

Stanley Nelson’s Attica also gathered a lot of positive buzz during TIFF 2021 and will surely be one of DXIFF21 standouts. This film tells the story of the 1971 Attica Prison riot, the bloodiest in the history of the United States.

Be on the lookout for Eva Orner’s Burning, a traditional yet highly effective and heartbreaking documentary about the Australian Black Summer; Paola Calvo and Patrick Jasim’s Luchadoras, about a group of female Lucha libre wrestlers living in dangerous Ciudad Juárez; and Lake Storm, a lovely documentary which follows a local newspaper in Storm Lake, Iowa fighting to survive.

Don’t sleep on the Short Films program. DXIFF21 has an outstanding selection of shorts that include Águilas, about volunteer searchers of missing migrants in the Arizona desert; Day of Rage, a 40-minute investigative film about the attack on the U.S. Capitol; The Vet Van, a film that follows a New York City mobile veterinary clinic that provides crucial and affordable help to struggling households; The Facility, filmed with cameras attached inside detention center cell-blocks to chronicle the struggles of detainees as they demand protection during the pandemic; and What You’ll Remember, an intimate love poem in which two parents recall and recast their time living in a car with their children.

Check out the full DXIFF21 program and get your tickets here. All the films will be available virtually in the United States.

In “The Surveillance Trilogy” panel, director Sonia Kennebeck will talk about United States vs. Reality Winner, Enemies of the State, and National Bird, her three films centered around whistleblowers and surveillance, and how to approach government agencies, protect your sources, and other subjects.

Filmmakers such as Jiayan Shi (Finding Yingying), Elizabeth Lo (Stray), and Leslye Davis (Father Soldier Son) will talk about how to transition from short-form to feature-length nonfiction filmmakers in the “The Short to Feature Pipeline” panel. A must for young filmmakers.

The “Fact-Checking for Filmmakers” workshop will aim at teaching participants how to efficiently and independently fact-check their work. In “Student Pitch”, Judith Helfland (Blue Vinyl) will teach you how to pitch your documentary. The Columbia Dart Center for Journalism and Trauma will impart a workshop about witnessing trauma and its toll on filmmakers and journalists.

In “Deep Fakery and Satire”, members of Human Rights organization WITNESS and Co-Creation Studio at MIT Open Documentary Lab team up to talk about the rising problem of deepfakes, accountability, and distinctions between deceits and attacks.

Featuring leading attorneys in copyright, whistleblower protection, and intellectual property will be on hand for the “Promo Bono Legal Clinic,” an opportunity for journalists and filmmakers to connect with experts, talk and even get counsel on a pro bono basis.

And this is just a sample of the rich training and information available at the Symposium. You can check the full program here.