Movie Review: ‘Cuties’ Accurately Portrays the Complications of Growing Up 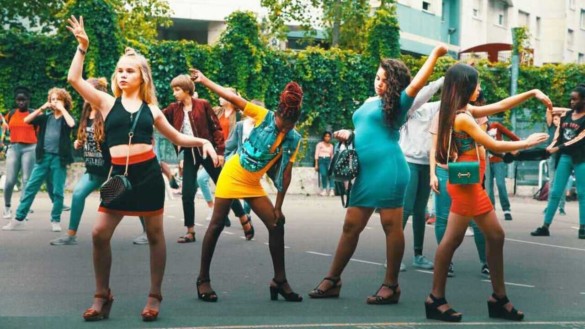 Synopsis: Amy, an 11-year-old Senegalese girl, starts to rebel against her conservative family’s traditions when she joins a dance crew named “cuties” at school.

Growing up is messy and alienating. The confusing process of finding your own identity and the best crowd can be overwhelming at any age, but especially in a moment when self-esteem is so precarious, and the biggest concern you have is to be liked by others. In addition, today’s environment is not a friendly one. The Internet, social media, and the expectations of society make it too hard to grow up unscathed.

This reflection is at the center of Cuties. The movie portrays the complicated path of maturity and finding yourself. Nevertheless, unsatisfied with this scenario, director Maïmouna Doucouré focuses this coming of age story in a Black Senegalese girl trying to adapt in a foreign country and a liberal society, completely different from her conservative background.

Cuties follows the story of Amy (Fathia Youssouf, with a wide-eyed face and a nervous smile), an 11-year-old girl that must deal with too much at once. She has arrived in Paris with her mother and two baby brothers, and her father will join them soon after. Her position as the oldest sister means that she must take care of her siblings – including an adorable Demba Diaw – while embracing her community’s old traditions. In addition, her relationship with her mother is complicated, who is struggling with her own grief after discovering that her polygamous husband will arrive in France with a new wife.

Once Amy arrives in her new school, her sight is caught by a group of young girls that seem to own the place. The typical mean girls that destabilize your whole world and make you want to be part of theirs, even if their attitudes and actions go against your own. In this aspect, Amy’s new conundrum is too real and identifiable. Every girl has been there.

These girls are confident, extroverts, and dressed in too provocative attires for 11-year-olds. They also have a dancing group called Cuties, copying their moves from mature, and yet accessible, music videos.

Amy will do everything in her power to be part of this gang, even when they treat her wrongly and call her names. In a matter of days, Amy changes her appearance, adopts new attitudes towards her family, and starts making questionable decisions. Soon enough, she is an entirely different person, even going further than her new friends had ever gone before and adopting attitudes that are too complex and sexual for her to even understand.

It is easy to understand that this movie reflects the complications of growing up in a lonesome way. These girls are lost and afraid, with no figure guiding them through these confusing times. The feeling of aloneness is at the heart of the movie.

“Cuties” has inadvertently become the target of conservative critics in an overwhelming discrediting campaign. What would have been a success story of a French-Senegalese director selling her first movie to Netflix, after positive reactions in Sundance, became a nightmarish experience because of a careless marketing strategy by the streaming giant, which was obscenely exploited by conservative trolls.

However, reducing this movie only to its evident critique of the over-sexualization of girls would be too easy and narrow-minded. As a matter of fact, Amy’s thoughts regarding her father’s decisions, combined with her apprehension towards the changes in her household and body, are the most interesting things of the movie. Her rebelliousness even feels revolutionary.

The movie does not shy away from uncomfortable topics that are present in real life, and that shape our process of maturity and attainment of self-esteem. Cuties reflects the real-life emotional abuse that young girls suffer through examples of slut and fat-shaming, over-sexualization of girls, the inappropriate content in the media, and how easy it is for children to get access to it.

Although hard to watch at times – precisely when the director makes it evident that the girls are acting foolishly – the movie accurately portrays the complications and conflicts of growing up.

Now regardless of its quality, it seems that Cuties has been judged and condemned. This is the real tragedy considering that the movie is directly criticizing the things that it is being attacked for. Furthermore, many of the themes and emotions that are part of our protagonist’s story are recognizable, more so if the audiences are formed by (Black) women and foreigners trying to adapt to a new social paradigm.

As such, it is impossible not to feel protective of the movie. Sometimes uncomfortable and others too radical, Cuties is an eye-opener with an inspired ending, despite the troublesome scenes we witnessed seconds earlier. People should be concerned, not at the movie itself, but at the realities that it clearly reflects.