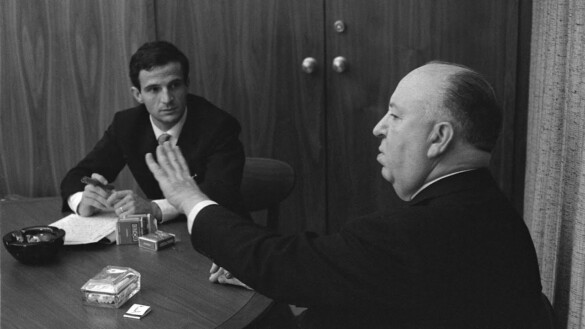 I decided in the last year to start reading books about individuals in film history, especially those who wrote it themselves and express, in their own words, the backstage drama that went on in their lives. Personally, I like my reading in print rather than on the screen because my eyes are susceptible to digital eye strain. Yes, it’s old school, but buying used books for a few dollars cheaper gets my attention more and fills a newly built bookshelf in my house. I’m thirty-one, yet feel like an old person for saying this, especially since these books are by major figures who have now since passed away. But, just like Brian Cox’s (Succession) autobiography in which he openly rips and praises certain actors – look at what he said about Johnny Depp in contrast to his view on Keanu Reeves – here are some books which let it all out about their lives and shenanigans in their careers.

So this technically is not an autobiography, but a transcripted interview between two of the greatest directors ever in which Alfred Hitchcock shared his secrets of every film he had made up to that point to Francois Truffaut. Directors usually don’t give a lot away in how they make their movies, but Hitchcock was comfortable telling the Frenchman every aspect of his work, the themes, and the thought process to all of his stories which led to his nickname, “Master of Suspense.” Truffaut, for his part, gushes on scenes and actors that impressed the former journalist before he became a movie director in this wonderful banter of auteur versus auteur. The book was later made into a documentary in 2015 of the same name.

Julia Phillips became the first female producer to win Best Picture for The Sting in 1974. She was only thirty years old and married to Michael Phillips. Afterwards, she produced Taxi Driver and Close Encounters Of The Third Kind. However, her career quickly spiraled as fast as it grew due to her cocaine addiction and she was ostracized due to her divorce. When she published her autobiography, it became a best-seller and a scandalous affair,  as she revealed her view that Hollywood was misogynistic in general and told the stories of sex, drugs, and egomania with every major person she worked with. Steven Spielberg, Martin Scorsese, David Geffen – there’s a list of stuff that opened the curtain to their actual behavior in the 1970s. Things that should’ve been kept private were out in the open, enraging the Hollywood establishment.

While it certainly ended any hope of a comeback in Hollywood, her book was acclaimed and a bestseller, staying No. 1 at the New York Times for 13 weeks. One Hollywood producer called the book “the longest suicide note in history,” and after Phillips’ death in 2002, the book was re-issued. I love it because of its impulsive, free-flowing style that doesn’t divide anything into chapters. Plus she gets very frank on everything going back to her childhood in New York, profanely talking about her free-thinking ideals, introduction to drugs (she was under the influence the night she won her Oscar), and the total collapse of her life leading up to her sensational book. In retrospect, it is no surprise how much of a boy’s club it was, but it’s just as important because someone finally wrote a first-hand account of how disgusting things got for a woman making her own way.

Not to be outdone by Phillips’ story, former head of Paramount, Robert Evans, wrote a retrospect of his life and sudden rise from actor to the King of Hollywood to fallen idol courtesy of cocaine and The Cotton Club, something previously written about on this site. But there was a lot more to Evans, who married Ali McGraw and lost her to Steve McQueen, greenlit major hits including Rosemary’s Baby and The Godfather, and played a major role in the New Hollywood revolution of the 1970s. Evans provides a lot of material from his life to the front; open, hilarious, and quite addictive that it’s really hard to put the book down. Not bad for someone who was about to be fired from The Sun Also Rises because Ava Gardner and Tyrone Power hated him, only to be saved by producer Darryl F. Zanuck who told everyone what became the title of Evans’ book. It would also be adapted into a documentary.

Tab Hunter Confidential: The Making of a Movie Star (2005)

The third autobiography on the list that was also adapted into a documentary (because we like to synthesize everything), Tab Hunter was the boy next door who wooed girls in the 1950s. Jack Warner established Warner Bros Records because of Hunter’s singing talent. Soon, Hunter fell to the B-film pools of obscurity before John Waters brought him back to prominence in Polyester. In the book, Hunter tells his story of how he managed to navigate homophobic waters and avoid being outed as a gay man when it was considered a career-ender. Like in the documentary, he talks about how he handled everything, including a relationship with Anthony Perkins while pretending to be romancing Natalie Wood in an era full of contradictions.

Ingmar Bergman penned his autobiography prior to his death in 2007 and it was completed by his editors using the Swede auteur’s own notes of what he made in a career spanning sixty years. Bergman admitted he has not rewatched his own films after making them, but relies on memory to talk about where his stories come from. Bergman is less about the technicals of filmmaking and more about his regrets, failures, and certain moments that influenced him all the way to his massive finale, Fanny and Alexander. (He did make one more film after this, Saraband, twenty years later.) It’s an insight into how, “a voice of genius,” as Woody Allen calls Bergman, continued almost every year to produce story after story that labeled Bergman one of the permanent fixtures of world cinema in the twentieth century.