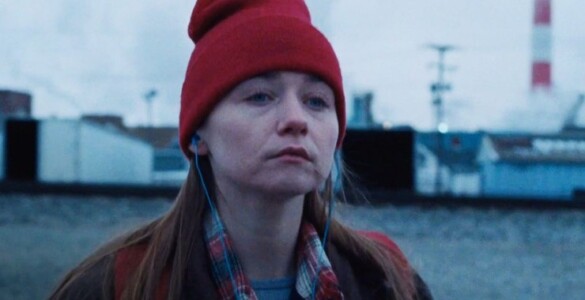 Synopsis: To pay for her education, and the chance of a better life, a young woman joins a dangerous scrap metal crew.

“Jobs. Jobs. Jobs.” Those words ooze from the radio in Blaze’s pick-up as he and Ruth approach the scrapyard that pays them chump change for discarded and stolen metals. Talk radio is a common racket in rural Ohio, where Holler is set. Millions of impoverished working class folks tune in religiously to hear silver-tongued politicos confirm their grievances and pander to the convictions they’re cyclically conditioned to hold. And places like director Nicole Riegel’s native Jackson, Ohio, are no exception. The fight to survive there is becoming harder every day as the rates of unemployment and addiction seem to be perpetually on the rise. For Ruth and Blaze (Jessica Barden and Gus Halper), young siblings living on their own in the wake of their mother’s penal detention, the meager earnings they make trading in aluminum cans aren’t enough to erase the eviction notice on their porch. So when an enticing, albeit criminal, opportunity to make extra cash emerges, they find themselves unwilling to turn it down. What unfolds proves to be a subdued yet sharp portrait of resilience in America’s fractured heartland.

Holler is a mosaic of minute details and specific choices. Shot on Super 16mm, Riegel’s debut feature consciously adopts the perceptible texture of the story’s setting; tiny silver particles dance in the dimmer areas of the frame, evoking the industrial terrain of this community and the precious metals that determine its value. Likewise, the wintery time of year lends a natural bluish-grey to the Rust Belt environment. The snowy color palette is somewhat ghostly and dull, which allows certain reds to pop: Ruth’s hat, Blaze’s truck, the smokestacks, and, of course, the abundant rust. All of this, along with Riegel’s handheld camera, coalesces to form an impeccable cinéma vérité vibe that is so seamlessly pulled off that a layperson could easily mistake the less scripted sections for a documentary about poor Ohioans doing what they have to just to get by. As a storyteller, Riegel refrains from sensationalizing the hardships of her characters. Her lens has the empathetic eye of someone who grew up there and knows that these people are more than melodramatic suffering. The film’s commitment to its neorealistic style keeps it from becoming poverty porn.

Cinematographer Dustin Lane utilizes available natural light to reinforce the picture’s overall honesty and to prop up the lived-in performances. He keenly illuminates the supporting players with practicals to provide subtle cues that indicate the energy they bring to the story. When we first meet Linda (Becky Ann Baker), it’s in the break area of the frozen meals factory where Blaze works and his mother used to. Linda is a positive, reliable presence, so Riegel and Lane stage her within this space so there’s a light source directly above her, giving her hair a halo-like glow, visually telling us who she is straight away. The same courtesy is not quite extended to Ruth and Blaze’s mother, Rhonda (Pamela Adlon). Rhonda has an altogether different aura. She’s damaged, a hardworking woman who got injured on the job and was then over-prescribed pain pills and is now withdrawing in county lock-up. The drab, hopeless jailhouse fluorescents deny her dark hair a proper topper, further emphasizing Rhonda’s crushed spirit. Adlon and Baker are superb character actresses fully capable of delivering great performances on their own, but Lane’s acute cinematography adds flourishes to their craft.

Anchoring the film’s salt of the earth approach is Jessica Barden’s portrayal of Ruth. Barden’s observational, discretely proactive performance burns like an ember. Ruth ignites when she must, but just as much can be gleaned about her by how she reacts to her surroundings. Ruth is a smart, waifish teenager determined to leave Jackson before it fades into a ghost town, dragging her along with it, so she’s not opposed to benefitting from quasi-illicit activity. This is clear immediately, since the audience meets her in the midst of such a scenario: Ruth sprints down an alleyway with two big trash bags full of empty pop cans, pilfered from a local business, as an angry proprietor follows her in pursuit. She tosses them into the bed of Blaze’s truck and they blast off. With this sequence, Riegel establishes Ruth’s familiarity with petty theft. (No longer allowed to borrow books from the library, we see Ruth swipe a copy of Madame Bovary, another story about a young woman trying to escape her rural milieu). So when the idea of breaking into buildings to steal loose scrap metal and copper wiring arises, it’s not at all unrealistic that Ruth would go for it.

Ruth and Blaze join the mysterious Hark (Austin Amelio), whose shadowy under-lighting is appropriately menacing, and his crew of looters on their burglaries. Gene Back’s score for these sequences is so understated that it’s hardly detectable, initially. The music grows increasingly ominous as the stakes mount, yet the tension seldom reads as manufactured. While the B&E’s definitely weave in layers of suspense, Holler doesn’t morph into a heist picture. The narrative focus instead remains on the struggles of this community and how one could be so tempted to risk any and all consequences to profit off the failures of a rigged economy, without romanticizing destitution and despair. Nicole Riegel’s rendering of this region comes from a visceral heartfelt connection to this place, her home, made up of downtrodden people who routinely pledge allegiance to mouthpieces who promise jobs, jobs, jobs and then don’t deliver because this country isn’t really designed to work for the disadvantaged. Perhaps the scabby reds, dingy whites, and gloomy blues of the area reflect our flag’s true hues. Well-crafted and well-acted, Holler is a stark reminder that maybe America was a mistake.