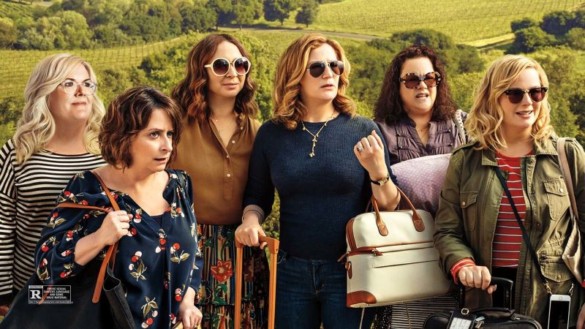 Synopsis: When a group of longtime girlfriends goes to Napa for the weekend to celebrate their friend’s 50th birthday, tensions from the past boil over.

There’s been a lot of conversation in film circles lately about the audience that a particular movie is “for.” The idea here is that some movies are made to resonate with one particular audience over others. I’m not sure I buy that completely, but the idea came to mind repeatedly as I’ve been thinking about my experience watching Wine Country on Netflix.

With so many movies today focused on fantastical stories told through CGI, it’s refreshing to find something that feels viscerally real. Nothing against big blockbusters (and the best ones are able to still find moments of relatability), but we also need films that have a higher level of relatability to our actual lives. Wine Country – directed by Amy Poehler – is exactly that kind of film.

At this point, I feel that I must state the obvious – I’m a man writing about a film centered on the friendships between women. So there are obviously aspects of the film that will be even more relatable to a female audience. But all of us have friend groups, and the interplay between these characters felt wholly familiar to me. Still, this is where that notion of being made for a specific audience comes in.

The main plot is that six friends who met years ago when they were waitresses together at a Chicago pizzeria have planned a Napa friends getaway. Abby (Poehler) is the slightly overbearing planner who put the trip together, Rebecca (Rachel Dratch) is the reason for the trip since they are celebrating her 50th birthday, Catherine (Ana Gasteyer) is a TV show executive who cannot unplug from work, Naomi (Maya Rudolph) is holding back an important piece of news from everyone else, Val (Paula Pell) is always letting others walk over her, and Jenny (Emily Spivey) wasn’t sure she’d even come. They all come out to Wine Country, and things both funny and emotional ensue. There are other key characters, too, like Tammy (Tina Fey) who is the owner of the place where they all stay. But this gives you the basic plot idea.

So many of the actresses are deployed wonderfully by Poehler. Seeing Rachel Dratch recount a story about connecting with a group of raccoons in the middle of the night is exactly the kind of comedy that she absolutely kills. And I cracked up when Maya Rudolph harmonized with the others using only high-pitched shrieking sounds. But I was sorely disappointed with how underutilized Fey was. Her role, though there are key plot elements that she is present for, isn’t really all that important. Any plot point that happens in her scenes could have happened just as easily without her. That sounds like a knock on Fey, but I don’t mean it to be. She just isn’t really given all that much to do.

If it all sounds like a story we’ve heard before…that’s because it is. But here again is where I’ll get back to the idea of a film being made “for” an audience. If Adam Sandler can get paid big bucks from Netflix to make buddy movie after buddy movie, it only makes sense that we get the female version too. Yes, the storyline seems a little stale (Bridesmaids handled this same material better, in my opinion), but it’s still worthwhile and enjoyable.

The other reason I didn’t connect with this one in a deep way was that I just didn’t find it all that funny, which isn’t the greatest thing to say about a comedy. There were moments, but overall it wasn’t that memorable of an experience for me. But, again, its key audience may resonate with parts that I didn’t find quite so hilarious.

At the end of the day, it’s fun just to see all these SNL greats back together again. That alone makes the movie worth watching. And Poehler has said that the movie was based on real-life trips that these friends had while celebrating their own 50th birthdays. That’s a nice added component of the film, and if this a way for us to get a window into their celebrity friend group – that’s kinda fun in its own way. A quote from Poehler in that article is especially interesting to me.

“… there’s just not enough films that take full advantage of what it’s like to be our age and to be around women that have known you for a really long time but aren’t competing for the same or the same guy.”

For that and other reasons, Wine Country is a worthwhile watch. It’s fun, and the performances (especially Rachel Dratch) are good. I wasn’t wowed by it, and I don’t know if I’d watch it again, but this might be a movie where I cave to the idea of a film being “for” an audience in particular. While I resonated with some of the aspects of friendship, there are surely far more moments that will be meaningful for female viewers. That a movie like this is out there is a very good thing, for sure.