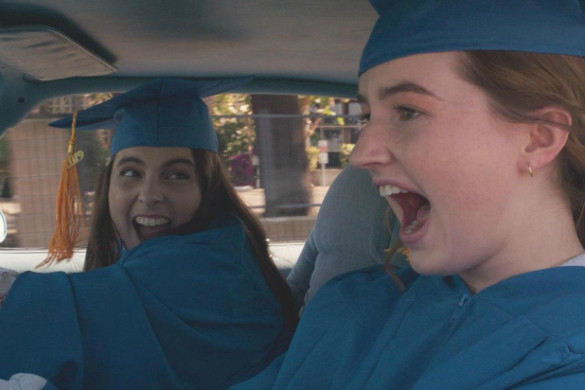 Synopsis: On the eve of their high school graduation, two academic superstars and best friends realize they should have worked less and played more. Determined not to fall short of their peers, the girls try to cram four years of fun into one night.

Throughout the last few years, the domestic audience has received a large number of great coming-of-age films. Starting with 2016’s cutting and heartfelt The Edge of Seventeen, followed by 2017’s textured and lovely Lady Bird, all the way to 2018’s anxious and great Eighth Grade, it’s been a great time for teenage women in cinema. Only months after the end of 2018, the 2019 entree to this series comes racing into theaters with Booksmart. In some ways, Booksmart feels like the culmination of the recent great teen cinema we’ve gotten – and it may be the best one yet too. While it may not have the polished finish and lived-in tone of Lady Bird, or as deeply felt lead characters of Eighth Grade and The Edge of Seventeen, that’s just fine. Booksmart succeeds due to overall excellence.

Centered around two seniors on the day before graduation, Booksmart follows around best friends, leaning towards soulmates, Amy (Kaitlyn Dever) and Molly (Beanie Feldstein). Both are overachieving, wonderful, charming, and absolutely the lamest pair that you’ll find on screen this year. The sheer awkwardness that melts off of the screen in the second scene alone is glorious and cringe-inducing. They’ve spent the entirety of high school getting good grades and trying to get into good colleges, but they soon reach a crisis. In an expertly directed scene, Molly confronts the realization that even the losers at her school made it into good colleges. The most obnoxious girl she knows is going to Yale along with her. This spins Molly into a full blown crisis, as no one knows that she’s fun, and it’s the night before graduation. Think Diane Court in Say Anything, but duplicated to two girls. Molly learns that there’s a party somewhere, and forces Amy along with her. While trying to get there, they run into a beautiful cast of characters and situations that are too good to spoil.

It’s hard to talk about what makes the film so marvelous without spoiling it, but it’s a film with a bleeding and beating heart that moves at a sensationally brisk pace. The film introduces our two lead characters by showing them uncomfortably dance before going to school, and that’s almost all of the characterization you need. The script has other little moments like this throughout that show how akin these two are. By showing and not telling how special the relationship between them is, the film paves the way for phenomenal humor. For a script from four different people, it’s a remarkably cohesive and lovely film in tone. It bypasses having an important message or meaning, and just shows an inseparably imperfect friendship. What tops it off is a director as agile as Olivia Wilde, who uses slo-mo and fantasy elements to charming degrees. She constantly redefines classic situations by subverting expectations to masterful effect.

It helps to have a pair of actors as talented as Kaitlyn Dever and Beanie Feldstein to lead a script like this. The care and love between these two characters is only elevated by the actors who embody them so effortlessly. Both shine in their own individual moments, Dever’s awkwardness shining perfectly in a scene where she has to interact with a girl she likes. Feldstein gets her best moment in a scene that could seem too cinematic early on, in which she ends up throwing a cake off of the side of a small hill. The side character seem to come in duos, each of them making a mark wonderfully. We’ve got the dispassionate principal played by Jason Sudeikis and the caring teacher named by Jessica Williams. We’ve got Amy’s love interest and Molly’s love interest. We’ve got the uncomfortable high school couple of Gigi and Jared (Billie Lourd and Skyler Gisondo, respectively) who appear out of nowhere in most scenes. Jared is a particularly sticky character, as he’s a privileged rich kid that no one likes, even if he’s unflinchingly compassionate and blissfully uncool. He’s such a small character, but I’m still thinking about him and Gisondo’s portrayal of him days later.

Something just clicks about Booksmart. It’s startlingly funny, maybe a tad over the top, but I struggle to find something that’s a genuine issue. It’s breakneck in pace, absolutely chock full of blissful jokes, and somehow manages to create characters that you’ll wish you spent more time with. If that isn’t a perfect addition to the coming-of-age cannon, I don’t know what is.