Movie Review: ‘Under the Silver Lake’ drowns amid its lofty influences 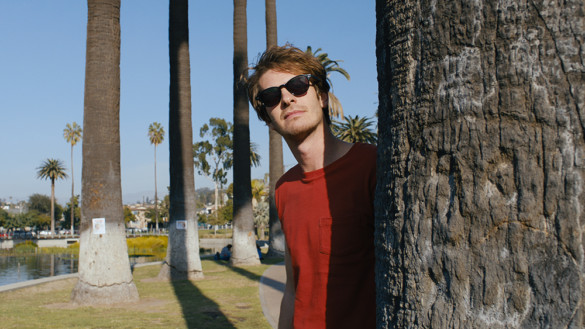 Synopsis: Sam, intelligent but without purpose, finds a mysterious woman swimming in his apartment’s pool one night. The next morning, she disappears. Sam sets off across LA to find her, and along the way he uncovers a conspiracy far more bizarre.

“Lot of skunks in Los Angeles, especially on the east side.”

The main character in Under the Silver Lake, Sam (Andrew Garfield), says this at an outdoor movie screening after he, himself, has been sprayed by a skunk. There are certainly other “skunks” that populate this story, but the movie itself is the one that stinks most of all.

Writer and director David Robert Mitchell proudly wears his influences on his sleeve here. This is something I always enjoy. I love catching little throwbacks to old films, and this one is rife with them. Characters literally walk over the graves of past Hollywood legends, including Aflred Hitchcock. There are references to Chinatown, Rear Window, and Mulholland Drive. It is that last influence that holds the most sway over the storyline. In fact, one of the key actors from David Lynch’s L.A. thriller appears in this film as well. But that is really where the comparison between the two films should end.

Sam is a stoner who is having trouble paying his rent. He lives a purposeless life. That is, until he finds the mysterious Sarah (Riley Keough) swimming in the pool at his apartment complex. She catches him spying on her with his binoculars (hence the Rear Window reference), and they end up running into each other the next day. But when she disappears soon after, Sam is sent on the chase that populates the rest of the film.

That chase lays the groundwork for the noir stylings that are one of the film’s few redeeming qualities. This is a stylish film, and it brings the old noir detective story into a more modern setting. However, it also makes the fatal mistake of throwing too many competing storylines into the mix.

While the film’s debt to Mulholland Drive is clear, Under the Silver Lake falls far short of its legendary predecessor. Where David Lynch’s masterpiece had perfect execution, Mitchell’s story continually throws intriguing ideas into the mix but fails to back them up. Mulholland Drive has some crazy twists and turns, but they work because Lynch had full commitment to his idea. Under the Silver Lake ultimately fails because it doesn’t even feel invested in its main character.

The film portrays Sam as the ultimate entitled loser. He doesn’t pay rent and the film gives no hint as to how Sam even maintains his livelihood (somehow he keeps ending up at elite parties). And yes, I was telling the truth when I said that he gets sprayed by a skunk. As character after character comments about his smell, I couldn’t help but wonder why this movie seemed to have such an utter disdain for its main character. Even more importantly, if the film doesn’t care then why should I?

I think an answer to the way Sam’s character is handled is that the film has some powerful things to say about male culture. Certain lines of dialogue about the male gaze belie this narrative thread. While there are interesting ideas here, I never felt like the film fully carried them through.

However, while we’re on the subject of the male gaze, this film contains graphic sexual content to the point that it really pulls you out of the film. Nearly every female character in the film is displayed as nothing more than a sexual or visual object. This goes back to Roger Ebert’s adage that it doesn’t matter so much what a film is about as much as how it is about it. Sure, Mulholland Drive contains graphic sexual content, too. But, again, the execution there is much cleaner than it is here. First, there is a narrative reason for the eroticism. Second, the female characters in that film are given far more to do than just being sex objects. While I’ll concede that this film may be going for a dissection of misogynistic culture, I think it goes overboard in its graphic sexuality.

Another element that pulled me out of the film was the music. Moments are underlined by the swelling score, and songs played by a fictional band in the story play a key role. But the music really calls attention to itself, and it honestly gives the film more of a B-movie vibe than anything else.

However, it wasn’t all bad. I must give credit to the stylish camerawork that at every turn attempted to redeem the experience for me. Mitchell and cinematographer Mike Gioulakis do an incredible job of using fluid camera movements and stylish setups to visually convey their story. The camerawork in this film is by far the best element.

A close second would be the acting, especially from Garfield and Keough. When I saw that these two actors were appearing in a film being distributed by A24, I was instantly intrigued. Garfield invests far more into the character of Sam than the film ever seems to. And Keough is absolutely beguiling. However, they cannot prop the film up by themselves.

By the end of the film, I no longer cared about the conspiracy Sam is trying to uncover. That’s a fatal flaw for any noir, as the investigation is always the key plot. There’s simply too much going on to be invested in any one part of it. There truly are some interesting ideas here, and the film is clearly influenced by the greats. Unfortunately, those legendary films don’t translate their secrets very easily, and this film feels completely lost amid the cinematic mystery for which it strives.