Movie Review (TIFF 2021): ‘Three Minutes – A Lengthening’ is a touching tribute to anonymous people lost during the Holocaust 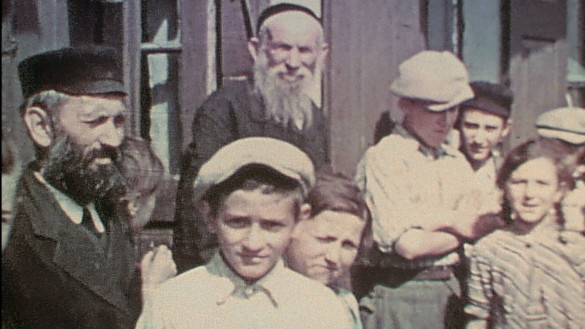 Synopsis: The documentary transforms rare color home-movie footage shot in 1938 Poland into a testament to victims of the Holocaust.

Earlier this year, A Radiant Girl premiered at the Cannes Film Festival, a film that depicts the life of a young woman in the Paris of the 1940s just as the Germans are about to invade France. Her life is beautiful, but we as an audience know what will happen to her and her family in the coming days and months. Here lies the horror of history.

Something similar happens with Three Minutes – A Lengthening, a documentary by filmmaker Bianca Stigter that tries to delve into found footage shot in Poland in 1938. History allows us to now know that the small town of Nasielsk, which is presented in these recordings, would be invaded by the Germans in 1939 and that most of the 7,000 Jews living there would be assassinated, resulting in only 100 survivors by 1945.

Stigter is aware of the reverence and importance that this found footage means for history and for the long-gone people, and as such she treats the images with care and respect. The investigative team that came together to piece this puzzle focuses on small clues – the color and buttons of the clothes, the design of the houses, the Jewish traditional hats that are used by boys and men, or the trees in the streets – to try to make sense of the place and people that live in this moment. Their effort is as exciting as it is solemn.

The documentary, with less than 70 minutes, is a worthy and touching tribute to more than 150 people that would remain unknown and possibly forgotten if it weren’t for the private footage of David Kurtz, a Polish man residing in America that went on holidays to his hometown in 1938. As the film beautifully narrates and shows, Kurtz would record his visit around Europe with his brand-new camera, including these three minutes in Nasielsk, where the locals were so excited about the idea of appearing on screen that they prevented him from filming the houses, streets, and buildings, piling up together, smiling and waving.

The story is presented in the form of a mystery, an enigma that is patiently discovered as the minutes go by. Stigter introduces us to the story with the raw footage, with no explanation or introduction, showing men, women and children walking down the streets, minding their own business, going in and out of a synagogue, and being distracted by the man with his camera. In 1938, this day was special because of the presence of Kurtz, and more than 80 years later it is also special because of the cultural, social, and anthropological meaning this footage has for human history.

Based on the book Three Minutes in Poland, written by Kurtz’s grandson, Glenn Kurtz, the film enriches the story presented in the book through its moving images and the delicate score composed by Wilko Sterke. Narrated by Helena Bonham Carter, Three Minutes – A Lengthening slowly captivates the audience with the recounting of the facts: the way the footage was discovered and salvaged, the complicated path of finding where had it been recorded, the impasse of not having anyone to recognize the faces appearing on the footage, and the excitement of making slow and valuable advances.

Sharing an eerie connection with Babi Yar. Context, documentary also released at Cannes 2021, Three Minutes – A Lengthening works as a heartbreaking reminder of the war crimes committed by the Nazis, this time in Poland. Testimonies, tributes and recovered news reconstruct what happened when the Germans arrived in this small town. This film is a monument to the small efforts that shape history and leave behind special clues. With information recovered from public records from the 1920s, news about a local button factory, and testimonies buried in Polish ghettos, it is a reminder of how important the actions of the present are for the generations of the future, no matter how small or trivial they may seem.

Three Minutes – A Lengthening mourns the lives that were cruelly snatched 83 years ago. It also celebrates more than 150 people that were briefly and randomly immortalized by the camera of a vacationer filming a family video. With a humanizing speech that demands the remembrance of these nameless people, Stigter makes sure that we don’t dismiss or forget their faces. This is the only inheritance we have of 7,000 Jews from the town of Nasielsk, Poland.