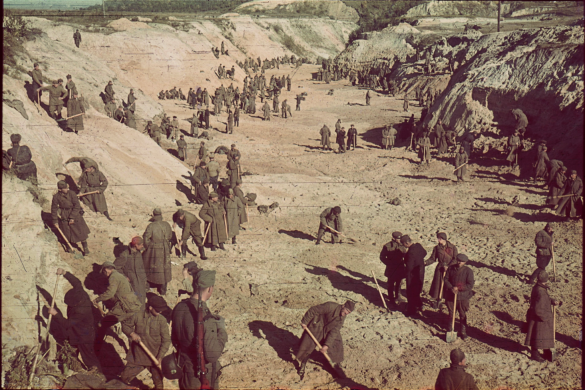 Synopsis: Nazi troops massacred 30,000 Jews over a three-day period in September 1941. The film reconstructs the historical context of this tragedy through archive footage.

It is difficult to talk about something as tragic as the Holocaust. Even though it occurred more than 80 years ago, the scars and heartbreak are still present, more so amongst the millions of people that lost loved ones during this massacre. Nevertheless, it is important that we – as a global community – never forget what happened, notwithstanding the pain it may cause to remember it.

This idea is what drives Babi Yar. Context, a documentary by Ukrainian filmmaker Sergei Loznits, and having a special screening during the Festival de Cannes 2021. It chronicles the German invasion of Ukraine and the assassination of 30,000 Jews on September 29-30, 1941, in Babi Yar, Kiev. Stated clearly in its name, the film provides context to these days of massacre, including the arrival of the Germans in Soviet land months prior, the conquest of the cities of Lviv and Kiev, the killing itself, and the reconquest of both cities by Soviet troops in 1943.

Using nothing more than archival footage, Loznits takes us back in time and allows us to see the people’s routines and every-day activities, and later, as the Nazis arrive, their complete transformation. The footage, mostly taken from amateur recordings of German soldiers and officers, and presented in a 4:3 aspect ratio, traces the burning of houses, the use of bombs, and the way that women rescued their husbands from POW camps, now expected to resume their lives as civilians and serve the Third Reich.

There are no interviews, nor narrations. Instead, the filmmaker relies exclusively on the images that are presented, as well as sounds and conversations that sporadically appear. This decision, similar to what Peter Jackson did in his World War One documentary, They Shall Not Grow Old (2018), is challenging but admirable. Narration is not needed when the images speak for themselves. Loznits offers transitions through black backgrounds with brief explanations, giving more context to the context that we see on screen.

We get to see the faces, reactions, and casual actions of people that are probably long gone, but that unwittingly are now part of history. Their mere appearance on screen is now precious because we can appreciate the way life was conducted during this pivotal time in history. In this regard, the archival discovery and the research done by Loznits and his team – with emphasis on archival researchers Victor Belyakov and Corinna von List – is astounding and worthy of recognition.

With the finding of this footage, they provide us with new sources of study and knowledge. Recovered from public and private archives in Russia, Germany, and Ukraine, these images were extensively restored. It is astounding that we can see videos of Germans bombing towns, Soviets bombing Kiev’s central street, or people giving their testimonies in court. On its own, Babi Yar. Context is profoundly valuable.

While the documentary is exempt of judgment, it is impossible not to feel anguish and pain by the views presented. Babi Yar. Context speaks to our humanity and the many failures that happened before, during and after the massacre by neighbors and non-Jewish citizens. People clap as the Nazis arrive, celebrating their new generals and pasting Hitler’s face in buildings and streetcars. Then, as the Soviets recover power, they clap again for these leaders. Loznits highlights that there was no resistance from Ukrainians once the massacres started. The filmmaker mourns the lives that were lost, as well as the humanity and empathy that was absent from witnesses. A newspaper clip celebrating the decimation of more than 33,000 Jews is the final straw in this heart-breaking feature.

While the first hour of the documentary is filled with images of the life before September 1941, the second half becomes more harrowing by offering pictures of the clothes of the victims in Babi Yar – the only colored images of the film –, as well as footage of the trials of several Nazis in 1946. The testimonies exposed here, by witnesses and accidental survivors, are worthy of nightmares. The descriptions are thorough, and the trauma is profound. Again, Loznits is focused on showing the real and unadorned terror of the Holocaust, going as far as including the public executions of those found guilty. Just as before there were people on the streets celebrating the arrival of Nazism in the Soviet Union, now there are around 20,000 people seeing the execution of a dozen men.

Babi Yar. Context urges the audience to not forget the tragedy that happened in Kiev 80 years ago. The tragedy of the assassination of 30,000 people, as well as the indifference and cruelty of neighbors and friends. With fewer and fewer survivors left, documentaries such as this become vital for the remembrance of our past and the avoidance of the same mistakes in the future. We simply cannot forget in a time when it seems that we are getting uncomfortably closer to the tragedy of our past.