Movie Review: The Neon Demon howls with haunting narcissism, and it works 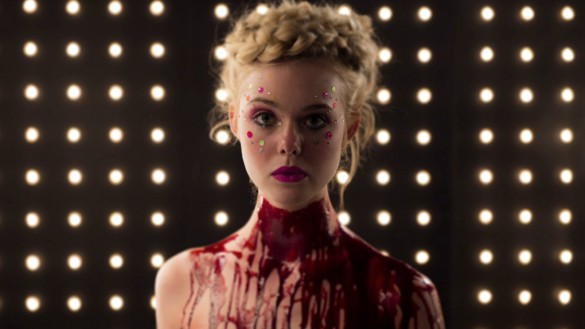 Synopsis: When aspiring model Jesse moves to Los Angeles, her youth and vitality quickly gains the attention of others leading to some rather unexpected circumstances.

If one were to look up Nicolas Winding Refn in the dictionary, more than likely you’ll come across the words “acquired taste”; his films blister with loud and colorful pompousness, you either love him or hate him. Is it possible to fall on both ends of that spectrum? I know I do. Films such as Only God Forgives reek of selfish, inconsistent, and unnecessary narcissism, while Drive still remains as my favorite film of the 2010’s thus far. I can’t help but feel fascinated by Refn’s work, even when it fails, but when it works it certainly rewards, even when those rewards are not that rewarding.

Hence is the case with The Neon Demon, a modern horror fairytale about the inner workings of the Los Angeles modeling industry, a film whose arduous ambitions feel more than welcome and well-earned. We follow innocent 16-year old Jesse (Elle Fanning in a terrific performance), a sort-of L.A. runaway with desires of becoming a top model herself. Jesse functions as the princess of this fairytale, much like her very own Cinderella, and like those central figures she has a lot of growing up to do.  Unfortunately, Jesse’s growth may not quite lead to her prince charming (or does it?).

Throughout her adventure, Jesse meets Ruby, Gigi, and Sarah (Jena Malone, Bella Heathcote, and Abbey Lee respectively), a makeup artist and two models who may have an agenda of their own. Their dreams of grandeur become further rooted in jealousy, anger, loneliness, and most importantly, narcissism. Their view of Jesse, a young nobody from out of nowhere, whose undeniable beauty and talent sweeps up the competition without ever having to even compete, is at the root of their lust for permanent beauty. This raises the important question of what one is willing to do to be beautiful, and stay beautiful in the view of the public eye; this task becomes even more complicated when your first audience member to please is yourself, hence the film’s central theme of narcissism and self-importance.

The intrigue is how this changes Jesse herself, and soon our heroine becomes a little less Cinderella and a little more Little Red Riding Hood (as if the lingering shots of the full moon weren’t a dead giveaway). Jesse was innocent and lacked confidence, that is until she realized what she truly had, beauty that everyone else wanted. Her transformation (visualized magnificently in a neurotic strobe-lit sequence) brings her down to Ruby, Gigi, and Sarah’s level, arguably no better than them by this point, yet Fanning’s performance maintains a surprising depth and even heartbreak as her innocence slowly diminishes and her narcissistic wolf begins to howl.

But the biggest narcissist of them all is never directly shown on screen, even though his techniques light up every single frame. I’m of course talking about Nicolas Winding Refn himself, whose filmmaking (loud and full of itself as it may be) becomes almost symbolic in nature. Refn is intentionally calling attention to himself, even amplifying Cliff Martinez’s haunting electronic score in any way he can (thankfully, the score is magnificent). But unlike Only God Forgives, there is consistency with the way The Neon Demon is shot, nor does it sacrifice dramatic or thematic resonance in favor of its directorial pride. It’s all incredibly self-important and over the top (even going as far as to create specific yet obvious jabs at the modeling industry itself, so on the nose it can’t even be called satire), but it is also recognizably attempting to be self-important for a specific reason, and I can’t argue against it here.

In case you couldn’t tell, I quite loved this movie, and it’s possible my affection for it was unclear amidst this narcissistic review I have just written (and that was the point, hopefully Refn would be proud). Granted, this is not for everyone, and as a warning there are incredibly arduous scenes that are going to put many viewers off (a chaotic strobe-lit dance act sure to cause epilepsy, a near vomit-inducing act committed by Jena Malone’s character, and a third act that truly veers into horror territory). The Neon Demon is not perfect, as much of its symbolism and satire is so on the nose it could be seen as self-parody by some, but Refn is not going for subtle; this is a world that is anything but subtle, and to approach this material in any other way would have defeated the purpose. Take that for what you will, just don’t sue me for saying that I thought this was a great film.

Hear our full review on Episode 176: