Movie Review: The BFG is unfortunately Spielberg by the numbers 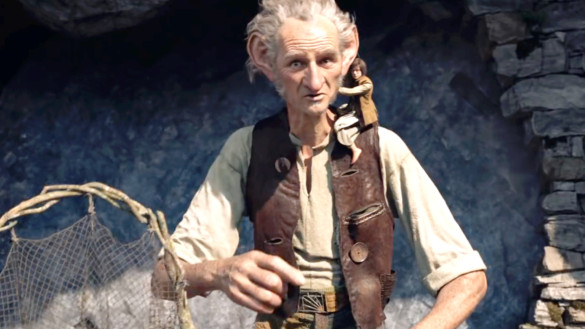 Synopsis: A girl named Sophie encounters the Big Friendly Giant who, despite his intimidating appearance, turns out to be a kindhearted soul who is considered an outcast by the other giants because, unlike them, he refuses to eat children.

In hindsight, it’s kind of crazy how The BFG snuck up on us this summer without it getting much hype. I understand it isn’t a superhero movie or Star Wars, but it is Steven Spielberg. You would think his name, as iconic as it is, would be enough to create discussion. However, The BFG didn’t get much play leading up to the film’s release, which is kind of sad because The BFG features Spielberg re-teaming with writer Melissa Mathison (Rest in Peace), who also wrote the screenplay for E.T. Yes, that E.T. Yet, The BFG still got lost in the summer movie schedule somehow.

The BFG, based on the novel by Roald Dahl, starts off in London where we meet an orphan named Sophie (Ruby Barnhill) who struggles to sleep and instead sneaks around the orphanage where she lives. Soon after accidentally witnessing something she shouldn’t have, she snatched away by a giant hand that takes her to a strange place. She soon realized it was a giant that has taken her but this giant isn’t like what she expected. He’s, well, a friendly giant. The BFG (played by Mark Rylance in motion capture) and Sophie start an endearing relationship that leads them on an adventure of discovery and overcoming some rather (ahem) giant obstacles in their way.

After a long string of dramatic and Oscar-nominated films in War Horse, Lincoln and Bridge of Spies , it was great to see Spielberg back in the world of fantasy and adventure. Some would argue his best work in this genre and it would be hard to discount that argument. However, the word that best describes The BFG is; unfortunate. Let’s be clear though, The BFG isn’t a bad movie but it lacks an energy that breathes in the classic Spielberg adventures we’ve seen before. The dynamic between The BFG and Sophie is compelling on paper, as well as the action, but it’s unfortunate that the final product on screen is actually dull, with little sense of wonder and awe, making the experience mostly mundane. It’s not often you hear that sentence as it relates to a Spielberg fantasy/adventure film.

The BFG often feels uninspired and the film’s themes of acceptance, open-mindedness and coping with bullying end up shallow by the film’s end. There are some interesting notions surrounding The BFG, who is a dream catcher by day, and by night he releases good dreams to people in London. The result of that is superbly affable and thematically alluring. However, the film doesn’t do enough to make that idea resonate as it should. Instead, we spend time having a silly breakfast with The Queen (one of Spielberg’s worst scenes) or worrying about The BFG’s fellow giants and how they may harm him. Understandably, the story needs drama but it’s the execution of implementing that drama that fails here. The lack of narrative focus, along with the film’s pacing, make the climax rather unsatisfying when those fellow giants become more involved, and inserted in a way that crystallizes with almost zero tension.

That said, this is a Spielberg film after all. Meaning, the craftsmanship of The BFG is still worth noting. The blend of CGI and real life characters isn’t completely seamless but the color palette used here is quite lush and evocative, especially during a scene where The BFG shows Sophie how to catch dreams. It’s one of the more breathtaking moments of 2016 so far. There’s another great moment at the beginning of the film depicting The BFG and how we strolls though the streets of London without being seen, and it’s the cinematic achievement you’d hope this film would deliver.

The seeds planted in the film’s first half and how it establishes the relationship between The BFG and Sophie is moslty good. It is perhaps a little rushed but the conversations are charming. The second half, unfortunately, is where the film meanders and loses focus of what it had established. I haven’t read the book by Dahl, and perhaps Spielberg and Mathison were sticking to the source material, but The BFG felt like it could have used some more flexibility in creating its own story that fit Spielberg’s vision and style. Regardless, the lack of versatility really hindered this film from being anything other than mediocre.

Hear our full review on Episode 176: