Movie Review: Ghostbusters delivers the funny, you should give it a chance 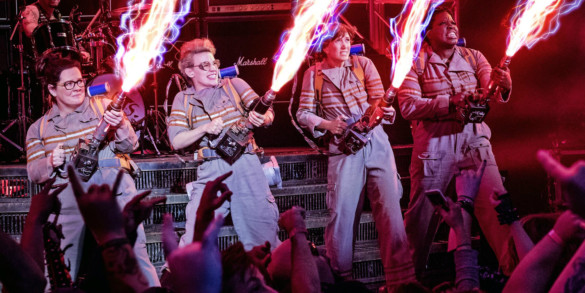 Racial biases, misogynist ideas and unhealthy hatred are significant challenges that director Paul Feig had to deal with for Ghostbusters. You should never write off a film for issues such as race or your misogynist ideas that woman can’t kick ass as good, if not better than men. The original Ghostbusters was a classic and was some of the most fun the 80’s had to offer. Did this series need a re-imagining? Of course not, but Hollywood is fresh out of ideas, maybe they should try the Pokémon Go approach. I have said this many times, but it’s important that we have female characters as the heroines and not just the damsels because it sends a powerful message to the young ladies in the world. Ghostbusters delivers a message that an ordinary woman and their passion for what you do can make a huge difference, you don’t need to be Katniss or Trish.

When you think of the old Ghostbusters, adjectives associated with that film still applies to the new Ghostbusters, except the laughs are primarily coming from characters that lack a Y chromosome. The Ghostbusters kick ass, so lets’s meet them, shall we. Erin Gilbert (Kristen Wiig) is an uptight college professor whose ghost hunting past threatens her tenure. Erin learns that old college friend Abby Yates (Melissa McCarthy) has been selling their book online. Julianne Holtzmann (Kate McKinnon in a standout role) joins the ladies as they investigate a call about a ghost. Eventually, MTA worker Patty Tolan (Leslie Jones) rounds out the group.

Paul Feig was the best choice to direct this film as he has a proven track record of handling female-led ensemble films. Feig knows how to get the best out of McCarthy, and for the second time in her career, she is not playing the same type of character. McCarthy surprised me in this film and was serious more times than not, and it worked for her. Kristen Wiig is one of those actresses that can do no wrong no matter what she takes on. Leslie Jones does an excellent job in her film debut, but the star of this movie is hands down, Kate McKinnon. McKinnion’s Holtzmann is smart, witty, and kicks some serious ghost butt. For everyone complaining about them being women, by the film’s end, it doesn’t matter if they are female or not. The cast is not the issue here.

The movie villain, if you want to use that term, is completely ineffective. Rowan (Neil Casey)is a creepy hotel custodian and his character will be forgotten as soon as the credits hit. All this leads to a lack of real conflict that the Ghostbusters face, their biggest battle isn’t with Rowan but rather with the media that belittles them.

Is Ghostbusters worth it? Yes, because although it was written off by everyone including a few retail stores that placed these toys on clearance before the movie releases, it’s a much better film than I thought. It stood up against the bullying it faced, which is ironic because the ladies in the film deal with bullying as well. I re-watched the original after viewing this one and if you haven’t seen the original with an adult eye, I would suggest you do so. The times are obviously different but to chastise the 2016 version because of your affection for the original is absurdly ignorant. Give this movie a chance.

Hear our full review of Ghostbusters coming soon on Episode 178!