Movie Review (SXSW): ‘Fruits of Labor’ Offers an Empathetic View to the Life of a Mexican-American teen 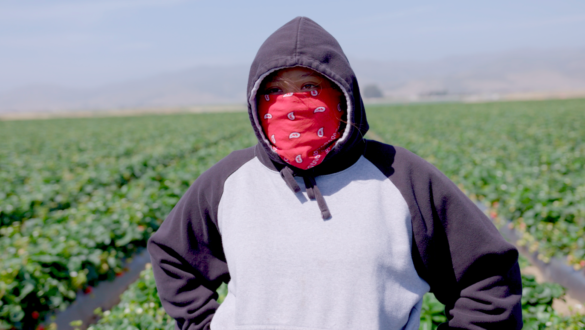 Synopsis: A Mexican-American teenage farmworker dreams of graduating high school when ICE raids in her community threaten to separate her family and force her to become her family’s breadwinner.

When we meet Ashley, a Mexican-American teenager, she is working in a strawberries field in the Californian coastline. Since she was 15, she has been the economic support of her family consisting of her mom – who works seven days a week as a cleaner – and her three younger siblings. She also tries to fulfill her school obligations with the objective of graduating high school and going to college.

Fruits of Labor, the latest documentary by Latinx filmmaker Emily Cohen Ibañez, offers a coming-of-age story of a young woman dealing with very grown-up issues that are related to her heritage and ethnicity. Ashley’s story is one that reflects the reality of thousands of immigrants in the United States that face a hostile environment, economic tribulation, and, in her case, the expected obstacles of being a teenager.

Cohen Ibañez follows Ashley as she starts her routine early in the morning, goes to school, takes care of her siblings, meets with her boyfriend, and goes to work at a strawberries factory from evening to dawn. The next day her routine starts all over again. With so much under her responsibility, Ashley still finds the time and energy to get excited about her coming graduation.

Through everything, including a conscious realization of Ashley’s responsibilities, her mood and optimism for the future always prevail. She is aware of the multiple challenges she has to face – that not everyone her age has to deal with – and faces every single one of them with determination and poise.

In addition to her daily-life obligations, Ashley has to confront a new threat: the presence of ICE in their neighborhood and workplace, and the possibility that her mother Beatriz will be unexpectedly deported back to Mexico. Consequently, Ashley and Beatriz start making legal preparations in case Ashley needs to become her siblings’ legal guardian.

Fruits of Labor presents a romantic point of view on Ashley’s life and those around her. Focusing on their dreams and interests, Cohen Ibañez creates dignified portraits of her subjects, illustrated by the family’s beliefs and connections to nature. They are deeply interrelated with the local community and their legacy. Even though they do not have much, they are committed to giving something back to their neighborhood.

Ibañez also provides a dignified and empathetic view of the Mexican-American community in California. The documentary works as a coming-of-age story with Ashley facing basic and petty problems (as any teenager), while navigating intense issues. We get to see her life at home, at school, and as a girlfriend. We learn about her feelings of fear and exhaustion, as well as her dreams of going to school. We also see her as an excited teenager when she goes through the traditional American ritual of going to prom, while everything around her underlines her Latin American legacy. This story is valuable because we see the reality of a young woman that is not typically presented on screen.

In addition, the documentary does not shy away from ugly truths that are deeply rooted in Mexican culture. Male chauvinism continues to exist in Mexican families, and as with Ashley’s family, it is supported and promoted by the same women that are affected by it. With three siblings younger than her, Ashley has the sole responsibility of taking care of them. While two of them are quite young (13 and 11), her younger brother (16) is protected by their mother because he is “the man of the house” and “he needs to rest”. When we learn that the boy’s girlfriend is pregnant, their financial support also falls on Ashley’s shoulders.

Still, her life perspective is always positive. Although her schedule is hectic and exhausting, she never complains about her circumstances, although she is well aware of them.

Whether presenting the local laws that do not protect children from working on agricultural labor or the shadow of ICE’s threat, Fruits of Labor works as both a glaring condemnation of the living conditions of minorities in the United States, as a celebration of their determination to improve their lives. Ashley is an empathetic and resilient example that shows us tough lessons on family love, duty, and progress.