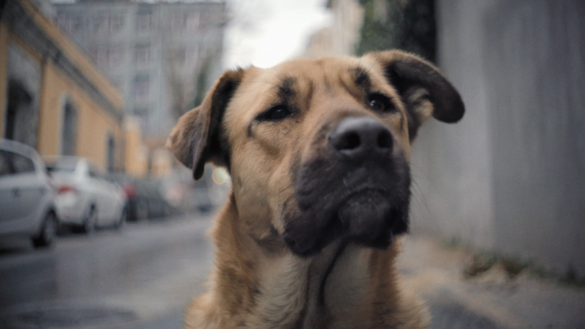 Synopsis: The world of Zeytin, a stray dog living life on the streets of Istanbul.

Perspective is important when crafting a narrative, even a documentary one, and while Elizabeth Lo‘s film Stray makes a bold choice grounding us in the perspective of the ownerless dogs that freely roam the streets of Istanbul, it’s not an entirely successful one. In response to protests about the high level of animal cruelty in the country, in 2017 the Turkish government made it illegal to kill or imprison stray dogs. The result is countless canines wandering the city like nomads, sleeping where they can, and eating what they find. Dogs don’t have much understanding of narrative structure, so our journey along with them feels a stream of consciousness in nature, the camera reacts to their instinctive behaviors and follows wherever they choose. But as we further explore the city and the circles these dogs reside in, you can’t help get the feeling that the more compelling stories exist on the periphery of what Lo is showing us.

From the opening shots of Zeytin, our canine protagonist, you’re taken by the intensity of their stare. Animals in the film are often being manipulated off-camera, trained to move in the ways the script demands of them, and acting with little autonomy of their own. Lo’s film, by contrast, allows her subjects to move wherever they please, she never pushes them in one direction or guides their movements. When Zeytin wanders out into the middle of a busy road, so does Lo’s camera, straight into the path of oncoming traffic that Zeytin seems ambivalent towards. These dogs have more freedom than we’re used to seeing, and this usually domesticated animal is quite comfortable being a lone wolf in a city that’s largely impassive towards him.

But audiences will certainly not be impassive towards these dogs. Zeytin makes for an engaging character whose still expressions and staring eyes rope us in and make us constantly guess what exactly is going on inside their head. They seem disinterested and unaffected by the snatches of conversations the microphone picks up on while traversing the city. The most amusing moment comes when Zeytin has the same bored, flat expression as a woman whose jealous boyfriend is complaining that she followed someone back on Instagram. Zeytin clearly has bigger things to worry about.

Because life as a homeless dog is pockmarked with violence and hunger. Lo’s camera lingers on Zeytin’s stringy legs and wiry body, and other packs of wild animals snarl and pounce after staring each other down for only a matter of seconds. Just as there are no restrictions to Zeytin’s life, so too are there no protections. They will curl up vulnerably on broken stone, barely sheltered from the elements, and at the whim of any possible attackers that come their way. Lo takes the inherent sympathy and attachment audiences are likely to have to on-screen animals and reveals a world where it’s very possible that the dog might die, and there will be no-one but us, a distant audience, to care.

The lack of care for a vulnerable life is a throughline of Lo’s film. Paying attention to the background is crucial to pick up on the subtle social commentaries at play. We hear voices amplified by megaphones offscreen for the National Movement Party, Turkey’s far-right ultraconservative camp, campaigning for an upcoming election. The dogs traipse behind bands of Syrian refugees, some who complain they can’t obtain a work permit, others who are teenagers trying to sleep on a construction site. The needs of these boys are repeatedly undermined and ignored, and it’s through their communion with the stray dogs of the city that we gain the most valuable insight into the life of outsiders in Istanbul.

But while this angle is undoubtedly a strength of Stray, there also lies an inherent weakness. The treatment of the refugee characters, how these vulnerable people are being treated, and the way the crisis is systematically ignored by the city, is too subtly handled by Lo. As soon as we meet the refugee teenagers, you’re left wondering why the film is still so fascinated by the dog characters, and continuing to spend time with the animals feels like a wasted opportunity. Dealing with complex political themes in a subtle, creative way is obviously a strength of Lo’s filmmaking, but the subject of refugees fleeing war needs a much more urgent stance than what we take away from the film. What’s more, the limited perspective the film takes, where the dogs dictate where the camera goes and the humans are often relegated to the background, means that there’s not nearly enough engagement with the crisis itself, because Zeytin can’t understand and is uninterested in the political landscape they exist within. If the refugees are meant to be the center of the story, they’re not present enough, and if they’re not, then they should be.

You could argue this is an intentional choice by Lo. Our society repeatedly will ignore the needs of the extremely vulnerable and make them feel like they don’t deserve a place among us. In rooting Stray firmly in the narrow point-of-view of its dog characters, Lo is asking us why, in Turkey, animals are giving protection when human life is pushed aside and ignored. You’re just left wishing she had argued this case in a more direct way.