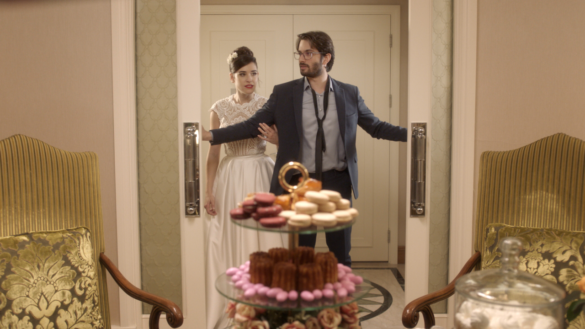 Synopsis: Following a fight in their honeymoon suite on the night of their wedding, a bride and groom embark on a surreal urban odyssey through the streets of Jerusalem.

It can be difficult striking the exact right tone in a dramedy, so it’s commendable that writer-director Talya Lavie manages to pull it off in her wedding night feature Honeymood. With obvious skill, she guides the audience through the nighttime streets of Jerusalem following a bride, Eleanor (Avigail Harari), and groom, Noam (Ran Danker), on a seemingly unimportant mission that gradually reveals the couple’s insecurities about themselves and misgivings about each other.

When Eleanor finds that Noam’s ex-girlfriend has gifted him a compass ring, her jealous, anxious mind assumes the worst and thinks their whole marriage will be cursed if they don’t return the inappropriate gift that night. Eleanor, chirpy, animated, and with a bubbly determination, spends the first act dragging her more obstinate husband from one location to another, and with every turn, another distraction appears to keep them away from their hotel suite a bit longer. The film is charming and amusing, anchored by the compelling and fractious relationship, even if the drama is a shade too contrived at points, and the frenetic urgency of the opening act gets lost along the way.

Lavie chooses to not show us any of the actual wedding, but its impact is shown clearly through the two main characters. Eleanor and Noam start the film giddy with the aftereffects of the celebrations before gradually unwinding under the stressful weight of the day they’ve just experienced. Their constant bickering wears them down as they move around the city, meeting a variety of colorful characters who all share unwanted advice on their marriage. This means as the couple split up and come back together, they carry fresh revelations about whether or not things will work out for them.

A lot of the film’s joy comes from the two performances at the heart of it. Danker plays Noam with a bitter, snarky cynicism, who is always uncomfortable talking to others and avoids being honest. His finest acting moment comes when he’s carefully trying not to say mean things about Eleanor’s ex’s painful short film. Harari, by contrast, has a wide-eyed eagerness and wild energy, a perfect choice for Eleanor’s knack for oversharing without a filter. Their relationship is perfectly summed up by the image of them walking down the street, him flatly staring ahead and her wrapped around his arm, pressing her face onto him. “I wish someone stapled us together,” she tells him. It’s this perfect blend of hopelessly romantic and unhealthily clingy that makes her so endearing.

Past the central two, Lavie’s script is filled with dynamic characters, each with a generous helping of personality. Noam finds his night haunted by his overbearing parents, who watch over him intensely and give half-baked pearls of wisdom. Noam’s deadpan expression as they chatter away at him cements how much he’s had to deal with annoying advice from people he would never think of listening to. In contrast to Eleanor, who enjoys copious amounts of attention, Noam is much more of an introvert, an individual rooted in his own way of doing things. The audience starts to wonder, if they’re so different, how is their marriage ever going to work out?

This comes into play most with the inclusion of Noam’s ex-girlfriend Renana (who sent him the compass ring that set off all the events). His apartment is littered with her belongings, and the scene where she arrives to clear it out highlights how at ease and relaxed he is around her. He’s not irritated by Renana like he frequently is by Eleanor. On the first night of their new life together, Noam is confronted with the past in a way that makes him skeptical about the future.

The comedy never feels like an intrusion to the drama though. No-one is overly wacky or silly, the characters are just so at odds with one another that their verbal sparring feels like natural conflict for the scenes. Not all of the humor is gentle though. More than once in the film, Eleanor is harassed by men, first by her ex, then by a stranger in the street, and both times the scene includes a comic beat at the end. But it always feels like this comedic inclusion is reducing a serious problem to cheap laughs, and the audience is likely to feel a bit uncomfortable in these moments.

In addition, around the midpoint of the film, it starts to feel a little lost. Eleanor and Noam wander off on their own and get embroiled with strange people, all of whom conveniently illuminate a personal dilemma they’re going through and therefore provoke startling epiphanies about what Eleanor and Noam want in life. The drama in these scenes feels a little forced and it’s never particularly subtle. It feels disingenuous, however, to complain about the coincidences that make up the story. The film verges into magical realism at points that it’s clear that the plot is made of whimsical, contrived happenings is kind of the point. And while there may not be a whole lot of tension throughout the film, it’s pleasant enough to just enjoy the oddball journey we’re taken through.

This is mainly because Lavie paints such a detailed portrayal of the setting. Jerusalem at night is brought vibrantly to life by the characters who populate it. Superstitious taxi drivers, waltzing bodyguards, and insolent students all provide large enough distractions for Eleanor and Noam, but their journey, despite how annoyed they are with each other, is really about whether or not they’ll come back together. It’s rare to see a movie about people getting cold feet after the wedding has taken place, but Honeymood tackles it admirably, balancing charismatic, dynamic characters with a decidedly introspective story. We don’t learn much about anyone other than the newlyweds, but Lavie makes a decent case for why that’s enough.