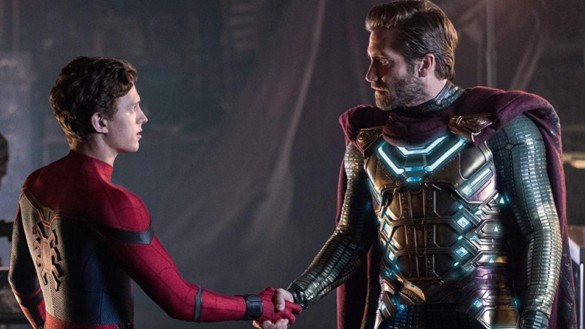 Synopsis: Following the events of Avengers: Endgame (2019), Spider-Man must step up to take on new threats in a world that has changed forever.

Jon Watts’s Spider-Man: Far From Home wrestles with a post-Endgame universe, pushes the boundaries of Peter Parker’s (Tom Holland) teenage naiveté, and attempts to encapsulate topical technological discourses.  These may seem like lofty ambitions for the friendly neighborhood Spider-man, and in some cases, the filmmakers bite off a bit more than they can chew.  However, with a crisp combination of affable acting and foreshadowing, Spider-Man: Far From Home works well as a stand-alone superhero movie as well as a springboard into the next phase of the MCU.

Peter Parker is struggling with the loss of Tony Stark and the effects of Thanos’ snap (what Far From Home deems the “Blip”).  Peter is juggling his affection for MJ (Zendaya) and his future as Spider-Man in a world where heroes are required, and threats can appear at any moment.  As Peter tries to come to grips with his past and his destiny, he also must deal with the problems that face tje affluent yet uncomfortable youth. A change of scenery comes in the form of a school trip to Europe, which is a welcome opportunity for Peter to leave Spider-Man behind and truly embrace and discover himself as Peter Parker, the teenager.  Quickly, Peter’s hopes are dashed as Nick Fury (Samuel L. Jackson) ropes him into assisting a dashing interdimensional hero, Quentin Beck (Jake Gyllenhaal), in the defeat of powerful elemental monsters. Soon, however, Peter falters and succumbs to the wiles of Beck (AKA Mysterio) and must race to save his friends and his love apparent before all is lost.

Far From Home emphasizes Peter Parker’s life as a teenager.  Sure, he’s been to space and fought Thanos alongside Ironman and Doctor Strange, but deep down Peter is just a teenage boy.  Tom Holland does a great job in making Peter likable and awkwardly enjoyable to watch. Peter is trusting, he is naïve, and his personal desires cloud his mind.  Some might argue that the MCU Spider-Man got too big, too fast. The friendly neighborhood Spidey was getting equipped by a billionaire mere months after stopping crimes on his local streets.  This springboard into greatness may have forced Peter to grow up quickly. Far From Home allows the audience to get adjusted to Peter’s awkwardness, his trusting nature, and his faults.  By comparison, Mysterio seems intelligent, confident, and strong. Gyllenhaal brings an effortlessly cool swagger to the screen that makes Beck/Mysterio an intriguingly charismatic character.  Once Mysterio’s true intentions are revealed, Peter finds himself personally responsible and must find a way to fix his mistakes.

In a post-Blip world, the public is desperately searching for the new Ironman.  The film posits that a new Ironman must be crowned in order to fight any threats on the horizon.  Tony’s image is seen everywhere throughout the film, and every location Peter and his friends visit seem to have its own shrines dedicated to the late hero.  The film focuses so hard on this inevitability that once Peter commits to helping Mysterio, one can already see the folly of that decision. In some ways, this commitment to Peter’s naiveté shapes him more as a character.  He is young, he is trusting of larger-than-life powerful father-figures, and he is constantly distracted by his feelings for MJ. This is a potent combination that is seized upon and exploited. While the inevitable twist is easily predicted, the faults of Peter Parker still exist.  It is how Peter confronts his faults and learns from his mistakes that allow him to grow as a character. Ironman was not without his flaws, some of which shape and define the events of Far From Home.  Peter learns through his and other’s mistakes to accept himself as being both a flawed human and a bearer of great responsibility.  The responsibility to protect what he loves is paramount, however; seemingly the entire world requires a hero, judging by the constant reminder of Tony Stark’s greatness.  In this way, Far From Home opens a Pandora’s Box of questions that as a single film it cannot possibly answer.  One can only hope Marvel will release more films to answer these questions…

At its heart, Far From Home is more than a story told in a world different from ours, it is a story that shares the same disturbing technological trends that plague our parallel universe.  Ambitiously enough, Far From Home grapples with the perils of fake news and the advent of deep fakes.  The film deals with these dangers in an over-the-top, Hollywood blockbuster kind of way, but the message is clear.  After the Blip, people are living in fear and a void is being created by the deaths in Infinity War and Endgame.  That void is just waiting to be filled by any individual that can come along and promise a feeling of safety and security.  Far From Home pokes at the philosophical questions of a hard truth vs. a comfortable lie.  Mysterio cleverly manipulates the populace and forces them to see something that does not exist, the result of which catapults the next phase of the MCU forward (without giving too much away, staying for the two post-credit sequences is a requirement).

Overall, Spider-Man: Far From Home is a fun and entertaining romp through Europe with the newest incarnation of America’s favorite web-slinger.  Far From home asks questions that will certainly be answered in subsequent MCU films.  However, Far From Home has the dubious burden of carrying the weight of a post-Endgame universe and therefore holds the responsibility of progressing the future of the MCU, which it does somewhat admirably.  While some Spider-Man diehards may be put off by the continued use of Tony Stark’s technology and Peter’s continuing missions outside his neighborhood, Far From Home works well as a bridge between the past and the future.   Far From Home does seem to be able to stand on its own even in the face of the enormous pressure placed on its shoulders by the biggest MCU film to date.  Far From Home has the possibility of becoming a polarizing film in the annals of the MCU.  The Endgame hangover is still being felt, but Spider-Man: Far From Home is a solid film that offers a fun and exciting look into Peter Parker’s life and the lives of everyone affected by the Blip, fear, and fake news.

Hear our podcast review on Episode 333: