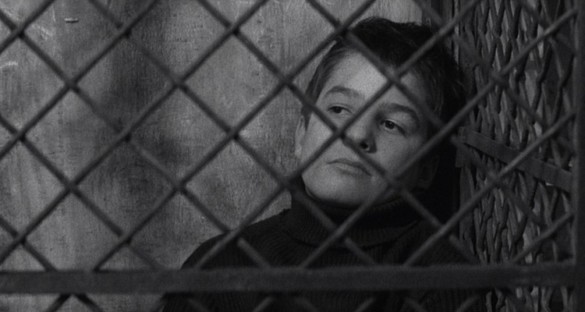 In recent years, we have fallen in love with the performances by children in Room, The Florida Project, Lion, Moonlight, and on the TV series Stranger Things. We’ve plucked out great performances from children throughout the decades and beyond our borders. Because I have the knack for foreign works and especially the old ones, I’ve always looked for those real performances cultivated from outside the Hollywood system. Some directors are legends behind the camera that have the intuition for great child actors while others had to struggle to get the right feel with them to get the right performance. Here are ten foreign (non-English speaking) movies with children as the central characters.

Roberto Rossellini’s third film of the War Trilogy after Rome Open City and Paisan is set on ground zero in Berlin right after the surrender of Nazi Germany. Turned to rubble, twelve-year-old Edmund lives with his ill father and two adult siblings who are a burden, leaving Edmund alone to fend for himself but completely depressed in his surroundings. For the innocent Edmund, it is the worst scenario possible and Rossellini gives sympathy for a defeated figure, a victim of a brutal regime in a flattened terrain. It was also personal to Rossellini; he dedicated the film to his son Romano who died suddenly aged nine and cast Edmund Meschke, a young acrobat in the circus, in the lead role because of his similar resemblance to Rossellini’s deceased son.

It is only thirty-five minutes long, but it is a treat from start to finish about a young boy who finds a large red balloon one day and sees that it has its own childish mind, following the boy around and floating outside the window of his bedroom. Soon, it becomes the attraction for other children seeing this one balloon like a pet to the boy. Albert Lamorisse, who would win the Original Screenplay Oscar for this film, made child characters a specialty in his works with his previous film White Mane. Using his own son, Pascal, as the protagonist, Lamorisse provides an enchanting piece that kids and adults loved, representing friendship and childhood innocence so colorfully. Additionally, Lamorisse would also create the game board Risk; sadly his filmography is limited after perishing in a helicopter crash in 1970.

A staple of the French New Wave and amongst the basics of must-see foreign movies, Truffaut’s groundbreaking debut was the first of his semi-autobiographical Antoine Doinel series with 14-year-old Jean-Pierre Léaud. The story of the troublemaker who rebels against his parents and his teacher and engages in various mischief was the ignition of a style of cinema that carried on today. It is such a stirring film that may not be as actually like what we were at fourteen (Eighth Grade was very good) but it does level up on an emotional feeling of seeking freedom at a period life when we may not know where to go. The last long tracking shot of Antoine running away to the beach, reaching it, and a zoom in freeze frame to finish the film is just a master shot of great directing.

In post-war prosperous Japan, two boys want a TV for their own home to watch sumo matches, but their parents will not buy them one. In protest, they give the silent treatment. Yasujiro Ozu made a remake of his own I Was Born, But and mocked the growing consumerism of the time through a child’s eyes. This was the second color film of his career and would mark the last few years of his life before dying in 1963. It is a bright film, calm and acceptive of the fart jokes kids like to play with each other. The envy of others and their appliances are also childish with the adults involved, similar to how the children want a TV. It is an interesting juxtaposition between adults talking and children farting in such a perpendicular fashion.

After his noir and romantic dramas, Louis Malle went to comedy with this surreal, rapid, and visually crackling story of a ten-year-old who spends the weekend in Paris with her eccentric uncle. Following novelist Raymond Queneau’s creative lingual humor with the French language, Malle creates a neverending parade of gags surrounding the wiseass child (and she is) while mixing it up with speedy cameras, quick cutting, and a complete mise en scene of anarchy which topples over the fourth wall and the gets the cameramen involved. Paris is a playground, on its streets, on the Eiffel Tower – which was shot on location, even in the air – and in its cafes where Zazie decides to have a ball without any care.

Ranked recently as the second greatest Canadian film ever, it is one of these coming-of-age stories that is very universal without the language barrier but provides insight into what Quebec was like in the 1940s outside in the rural areas during the cold winters. Everyone knows each other, the asbestos mines are owned by the Americans, and Quebec was under a government referred to as “The Great Darkness.” Here, however, it is light-hearted with the story of Benoit, who has lost both of his parents and visits his uncle for the holidays. There, Benoit has his first feelings of sexual attraction, as well as a close encounter with what being next to death is. It is semi-nostalgic, semi-realism, and bittersweet in what a Quebecan child would have gone through, like the director, Claude Juntra, back then.

Set in 1940, one year after the end of the Spanish Civil War, six-year-old Ana sees James Whale’s Frankenstein and finds herself haunted by its power. The aesthetic director Victor Erice brings is poetic and reflective of the beginning of the Franco dictatorship right as Spain was at the end of it. The very steady pace, almost like a Tarkovsky film, allows the viewer to take in the scenery, one of desolation at the time, and the darkness that Ana is picking up who Frankenstein is and how much she seems to feel a relationship with a fictional character.

Before he came to America to make a bunch of mediocre work such as The Cider House Rules, Dear John, and A Dog’s Purpose (apologies to fans of those films), Lasse Hallstrom made a deep impression with a coming-of-age story about a boy in 1959 who moves in with his uncle after his mother becomes very ill. It is given special treatment, using the metaphors with dogs as a way to describe the emotions the boy is feeling when it comes to making new friends and finding his first crush. It also handles the eccentrics of the village the boy now lives in as he has to start reattaching himself to a new society that is nothing like the one he had with his parents.

It wasn’t the first time Louis Malle made a film with a child as the centerpiece. Besides Zazie Dans le Métro, the candid Murmur of the Heart (1972), and the controversial Pretty Baby (1978), Malle added his personal touch is this semi-autobiographical drama about a boy in a Catholic boarding school who discovers a Jewish classmate in hiding. Set in Occupied France, Malle lived through this period and was a witness to the event. It is heartbreaking for children can be betrayed and used and, as seen in other noted films, war is cruel and everyone is for sale and noted when a collaborator of the Gestapo says, “Stop acting so pious. There’s a war going on, kid.”

Schoolboy Ahmed realizes he has the notebook of a classmate who is on the verge of falling out and has to go on a quest to return it to him in a nearby village. It a small tale about civic duty and looking for others, even as children. The traditional lifestyle of the Iranian countryside is also depicted, courtesy of the master, Abbas Kiarostami, arguably the greatest director to come out of the country. Like in his future works, there is the weaving of human dignity regardless of age that Kiarostami just had a grip of. This was the first of his Koker trilogy, refering to the name of the Iranian village where the stories take place, and would Life and Nothing More and Through the Olive Trees.