Movie Review: ‘Slender Man’ is horrible in every way possible 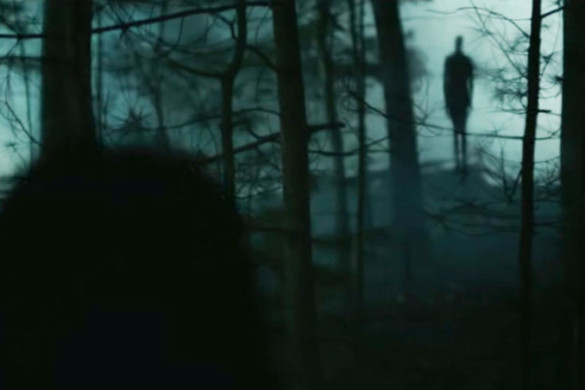 Synopsis: In a small town in Massachusetts, a group of friends, fascinated by the internet lore of the Slender Man, attempt to prove that he doesn’t actually exist – until one of them mysteriously goes missing.

In an era of horror movies like The Witch, The Killing of a Sacred Deer, and, most recently, Hereditary, I didn’t walk into Slender Man expecting it to be anything other than a cheap thrill (it’s a far cry from an A24 release, after all). I figured it would be a throwback teen slasher in the vein of Friday the 13th or Halloween, but with a modern mythos twist. Unfortunately, this movie doesn’t even meet my very low, very basic expectations of what a lowbrow horror movie should be. It is not fun. It is not interesting. And it definitely isn’t scary.

It’s hard to talk about Slender Man in any kind of critical or analytical fashion because nothing really happens and the characters are so flat that if you look at them wrong, you don’t even really notice they’re there. Nothing anyone does makes much sense and I don’t think it’s a spoiler to say that about half the movie is some type of hallucination or dream so it doesn’t really matter what anyone does anyway. And all of this could still make for an enjoyable movie if it paid homage to the 80s teen horror movies to come before it, but it doesn’t really do that, either. It keeps a few basic cliches, like a group of teens summoning evil purposely on accident, but loses sight of why the 80s teen horror movies were popular to begin with. A good horror film plays up social fears and anxieties in interesting and often disturbing ways, and with a movie interpreting a modern Boogie Man myth, Slender Man has plenty of opportunity to symbolize modern teenage fears. Instead, the filmmakers just threw in a few blatant teen pregnancy mentions in the mix and called it a day.

Throughout Slender Man, I kind of found myself looking forward to seeing these interchangeable, unlikable, stupid, stupid teenagers get eviscerated, but even that never comes. Characters just kind of drop out of the story from time to time. I know this movie was watered down pretty significantly to go from an R rating to a PG-13 rating and, honestly, I can’t even figure out what scenes were changed. If it wasn’t for the scenes of teen drinking and a few curse words, this movie practically could have been PG. There was a kid in my theater who couldn’t have been more than eight years old and I was prepared to be pretty judgey about that but by the end of the movie, I shrugged it off and thought to myself, “He’s fine.” In fact, even he seemed underwhelmed. As I left the theater, I saw him shrug and tell his older siblings, “That was kind of a weird movie, I guess.” If the filmmakers really wanted to focus on making a PG-13 horror movie, I think it would have served them well to splice as much found footage-type scenes in as possible and make the movie more about the teenagers trying to piece together the clues to find and defeat the Slender Man rather than making the teenagers purely the object of the pursuit. But I suppose that approach would paint the internet as a positive resource and heaven forbid that be the case. The internet is an evil, evil thing, after all.

If I had to guess at this movie’s inspirations, I would say that someone read the Slender Man Wikipedia page, watched all of Darren Aronofsky’s movies, and spent a lot of time thinking about but not actually re-watching The X-Files and Buffy the Vampire Slayer. He then told his location scout, “Find me the X-Filiest forest you find. And pump that fog in good!” He then turned to his cinematographer and said, “I want ALL the SnoriCam.” The end result is this movie. To be fair, the cinematography and the locations are its strongest points by far but they’re so reminiscent of things from the 90s like The X-Files, Buffy the Vampire Slayer, and Aronofsky’s earlier films that I’d much rather just go watch those things and remember when they were original than subject myself to this derivative, nonsensical swirl of fog and forest and SnoriCam.

I don’t like giving negative reviews and I usually try to identify an audience that might like a movie even if I did not. But this is honestly not a movie anyone should see. I was consistently bored throughout. Most people were laughing in the theater. The eight-year-old kid was unimpressed, for crying out loud. I can’t think of anyone who would like this movie…maybe someone who has never seen a horror movie before?