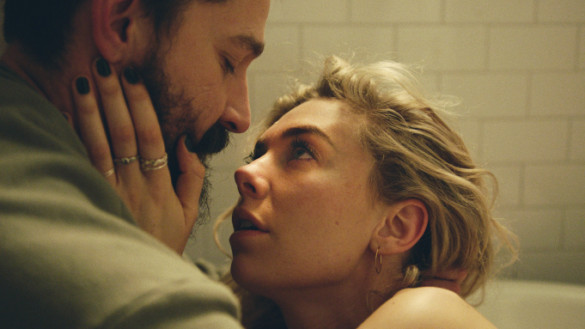 Synopsis: When a young mother’s home birth ends in unfathomable tragedy, she begins a year-long odyssey of mourning that fractures relationships with loved ones in this deeply personal story of a woman learning to live alongside her loss.

Kornél Mundruczó’s Pieces of a Woman is among the most heartbreaking films in recent memory. Its opening sequence in particular is going to be difficult for many viewers to stomach. The loss of a loved one is profound and deeply personal, often affecting all areas of your life as we reflect on our grief. This notion is always on the minds of Mundruczó and writer Kata Wéber, a couple who bears the same deep scars as the film’s characters.

Based off a stage play by Wéber, Pieces of a Woman examines the fallout of a mother, Martha (Vanessa Kirby), whose infant daughter dies shortly after childbirth. Her husband Sean (Shia LaBeouf) equally struggles to accept the reality of what happened to their baby girl. As grief becomes their mistress, they become cold and isolate, both toward each other and the world around them. In an attempt to find some sort of justice, Martha’s mother (played excellently by Ellen Burstyn) sues the couple’s midwife (Molly Parker) for criminal negligence.

While most of the film’s drama is fictionalized, its emotions are palpably real as Mundruczó and Wéber channel their own experiences of losing their child. Articulating the sting associated with parental loss is assuredly impossible, so Pieces of a Woman takes aim at showing us instead. This starts with an opening sequence that demonstrates the anxiousness of both Martha and Sean as the birthing process begins. Shot mostly in a one-take sequence, the camera follows Martha around their home as her physical pain and breathing intensifies. Unexpectedly, their midwife is unavailable and a new one is assigned. Sean, doing everything to comfort his wife, is vividly nervous but excited for this new change in their lives. As the baby gets closer, there’s a great moment between Martha and Shawn, embracing each other in love and support. Mundruczó not pulling any punches, amplifies the moment with not just great cinematography, but blistering sound design that includes heartbeats and silences. Things escalate. A brief moment of joy. Then devastation. It’s a series of events that floored this critic. It’s visceral. It’s poignant. It’s hard to watch, but excellent in setting the table dramatically.

The ramifications of grief can be different from person to person. Both Martha and Sean are heavily affected, but not in the same ways. Sean is looking to Martha for healing. A way to stay connected to their family. Martha, however, now sees Sean as a reminder of her pain. As the two become more distanced from each other, the narrative may be derivative, but it does a wonderful job of establishing perspective. We come to understand where each of them stand emotionally and why they make the choices they do. Mundruczó is deliberate in his pacing, which could render the film too methodical for some, but that choice allows the film to meditatively study the various reactions to tragedy. So, as the sizzling heats up more, and the boiling point becomes too much for all parties involved, everything comes to light and we see just how diverse the grief has become.

In what will no doubt be Burstyn’s Oscar moment, as Martha and Elizabeth’s relationship comes to a head, Elizabeth goes on a rant about her upbringing and the difficulties of her own childhood. While her points are valid, she fails to see what’s driving Martha’s brooding insulation. It’s a great moment, full of sublime acting, that eventually reaches the film’s thesis; sometimes parents don’t want to move on from grief. Whether it be through a genuine cry for help, offering advice, or in the case of Elizabeth, wanting justice for Martha, people may not realize that those gestures only offer more pain and separation. That is the beating heart of Pieces of a Woman.

As a result, the inclusion of Ava is important. Inspired by a Hungarian trial of a home birth advocate in 2010, she becomes a catalyst for Martha in the final act, as she is able to revel in this idea of never moving past her grief. Without getting into too many details, Martha is able to experience things she never would have other wise. A red room, I’ll say vaguely, becomes one of the film’s most potent moments. A confession later also hits the heart in heavy ways which leads to a symbolic shot at the very end of the film that can be as emotional as the opening sequence (at least for this critic it was).

In the spirit of transparency, perhaps my own parenthood blinds me from seeing the flaws that many other critics have noted. If you’ve listened to the InSession Film Podcast at all, you may know how I wear my emotions on my sleeve. So take any of this for what it’s worth, but Martha’s reaction is undoubtedly how I would react if (god forbid) I ever found myself in this situation. However, Sean’s reaction also resonates with me. The turmoil they face in Pieces of a Woman is, of course, arduous, but the film doesn’t wallow in emotion simply for drama’s sake. There is truth to how things play out that will linger with me for a long time.