Movie Review: ‘Midsommar’ is a stellar film with an extraordinary performance from Florence Pugh 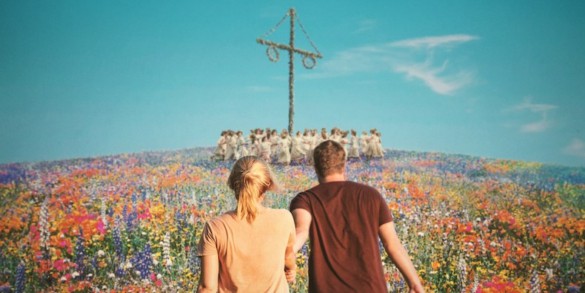 Synopsis: A couple travels to Sweden to visit a rural hometown’s fabled mid-summer festival. What begins as an idyllic retreat quickly devolves into an increasingly violent and bizarre competition at the hands of a pagan cult.

Relationships require trust and honesty if they are going to be successful. If you can’t rely on the person you are with, then it might just be best for you to move on. When watching director Ari Aster’s first film Hereditary, I didn’t trust him as a filmmaker and didn’t think he was giving the viewer something unique. But with his sophomore effort, Aster improves on his pervious mistakes, sharpens his tools and makes a very good horror movie wrapped in an outstanding relationship drama.

Midsommar follows Dani and Christian, a couple that is on the verge of a breakup. They fight all the time and don’t listen to one another. When a horrific event rocks Dani’s world, the relationship continues due to Dani needing Christian so she isn’t alone. So when Christian and his college friends are about to go on a trip overseas, he reluctantly has to invite her to join them and she accepts the invitation even though she knows she’s not wanted by the group. They travel to Sweden, to a midsommar festival hosted by the family of Christian’s friend Pelle. Each member of the group is going for different reasons, either for research on a thesis paper, sexual exploration or, in Dani’s case, escapism from her personal life.

As the group arrives, everything seems to be pleasant and welcoming. But as the film unfolds, we start to realize that the group has been dragged into a ritual that happens every 90 years. The motives of the cult are deadly evil because their philosophy says that they have to sacrifice outsiders and some of their own in order for their group to survive. The more we learn about them, the more their history starts to make sense and doesn’t seem to be so far fetch of ideas to get behind. Their methods are unorthodox, with elder members of the cult killing themselves before their 80th birthday, constant dancing and lots of hypnotic liquids. But what Aster shows is the group coming in and trying to not just learn their ideas but question everything these ideas. As the film goes on, all the male members of the group seem to mistreat or spit on the cults ideology, while Dani is the only one that seems to embrace it. And just like the relationship between Dani and Christian, one side seems to try and make the circumstances work and the other seems to be lazy and not make the effort.

It’s no secret that Aster used this film as a way to recover from a painful breakup that he had recently has in his life. And while director usually put themselves in one character and we can figure out their side of the relationship, I felt that he put himself in both the Dani and Christian character. Towards the beginning of the film, you can feel that he is writing it for you to side with Christian, wanting to get out of this relationship asap. But by the end of the film, his allegiances switch to Dani, in that she is someone that deserves someone better than the man she is with. She deserves to be with someone that loves them and won’t treat them like a piece of garbage and make them feel horrible for every little decision that they make. By the end, it is clear that Aster cares more for Dani, and it’s possible that this movie is commentary on a man figuring out that his destructive methods lead to alienation of his female partner.

The performances from Florence Pugh and Jack Reynor are extraordinary, with both carrying two halves of Asters heart and reality. But while these two actors are shining in the film, they are being carried by Aster’s personal script that hits close to home for anyone that has been in a relationship for an extended period of time. While the marketing tried to box Midsommar as the 2019 Wicker Man, the movie has more kinship to the best break up films of the decade. And as the credits roll, and the fire is burning in the background, I can finally say that Aster has made his first stellar movie. If his next project is anywhere as personal and detailed as Midsommar, then he might just turn into one of the best directors of his generation.