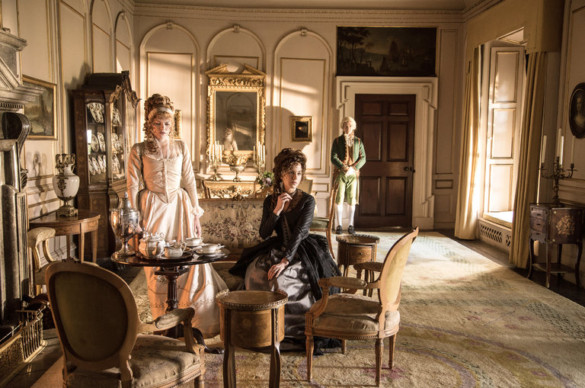 Synopsis: Lady Susan Vernon takes up temporary residence at her in-laws’ estate and, while there, is determined to be a matchmaker for her daughter Frederica — and herself too, naturally.

When it comes to Jane Austen, it often feels like people either love her work or don’t care for it at all. Rarely have I seen the middle ground in my experience with her. Regardless of what you may think of her, the fact is, she can be pretty dang funny and director Whit Stillman certainly brings that to life in Love & Friendship. Stillman was nominated for Best Original Screenplay back in 1991 for Metropolitan, so it’s no surprise to see that the screenplay for Love & Friendship is the film’s strength, alongside superb performances.

Due to recent changes in her life, Lady Susan Vernon (Kate Beckinsale) temporarily takes residence at her in-laws’ estate, which comes at quite the surprise to her family at first. Soon after arriving, Frederica, Lady Susan’s daughter, joins them and you can soon tell that she would rather stay with her grandparents than with her mother. However, that doesn’t stop Lady Susan from pursuing her goal of playing matchmaker for Frederica, who wants nothing to do with what her mother is up to. Simultaneously, there’s a romance that blossoms for Lady Susan in the process, which complicates matters further and it all leads to some rather interesting situations.

While that synopsis seems rather trite, Stillman’s writing is actually quite refreshing. The screenplay is hysterical and interweaves both satire and genuine character development in a way that is pretty charming. Austen’s commentary on English society in the 1700’s and how relationships worked back then is not only funny, but it’s also smart. There’s some great questions brought up about gender roles, women’s placement in men’s lives and how silly the stereotypes were back then. Ironically enough though, some of that satire is just as prevalent today, sadly. In some ways, Love & Friendship was Jane Austen’s version of The Lobster.

Stillman’s writing certainly makes those themes felt throughout the movie but his direction is wonderful as well. The art direction is beautiful and juxtaposes the satire of the film really well. You are immediately supplanted in 1700’s England with lush cinematography that is aesthetically very pleasing to look at. The costumes, buildings and ambiances are authentically lucid. Stillman also implements some meta techniques to introduce the characters and setting, which felt very Deadpool-esque and was also quite funny in execution.

All of that said, you can’t talk about the film Love & Friendship and not mention Kate Beckinsale, who is as endearing as ever. The funny thing about that, as compelling as Lady Susan Vernon is to watch, she’s actually the best movie villain we’ve possibly seen in 2016. Forget Apocalypse, forget Shredder and Krang, forget Lex Luthor, forget Gul’dan, Lady Susan is the best movie villain we’ve seen this year. The way she uses charm and beauty to connive and manipulate is incredible. Lady Susan may not want to take over the world like the aforementioned villains but she is determined to get her way and isn’t concerned with who she hurts in the process. Don’t get it twisted, she is not a saint or a hero. She isn’t evil per se but that doesn’t mean her actions are good either. You are not going to be rooting for her at the end of this film. That said, she is still captivating to watch and holds a lot of the root to this film thematically regarding gender roles. And Beckinsale brings all of that out in Lady Susan in such engaging fashion.

Love & Friendship won’t be a film for everyone. The dialogue used here is exactly what you think of when someone says the words “Jane Austen” and it will be jarring initially. However, once you settle into the film, it’s easy to track and the story takes some fun and humorous turns that you can enjoy. The performances all around are great. Tom Bennett steals every scene he is in as Sir James Martin, he is just a riot. Morfydd Clark is also worth noting here too. The only major issue with the film is the movie’s third act, which does meander a little bit and the final scene abruptly ends without tying some things up smoothly. Outside of that, the film is a joyride that I’d recommend.