Movie Review: “In the Heights” is a superficial but feel-good modern fairytale 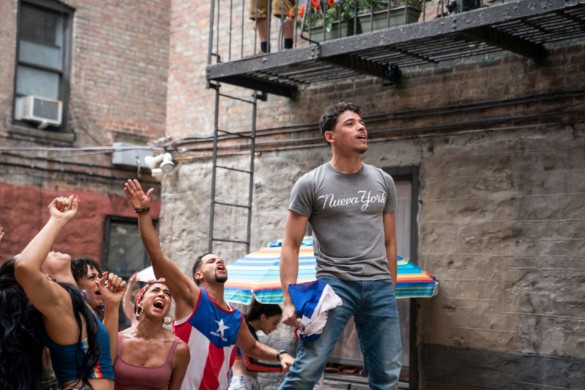 Synopsis: A film version of the Broadway musical in which Usnavi, a sympathetic New York bodega owner, saves money as he imagines and sings about a better life.

In the Heights has been out for only a week and it seems as if its fate has been set by overwhelming reactions of letdown expectations, only sunk by its box office numbers that keep plummeting. As with other films of underrepresented sectors of the American population, it seems that it was carrying too much on its shoulders and it was bound to disappoint.

The latest film by John M. Chu (Crazy Rich Asians) – I still don’t understand why a Latinx director wasn’t in charge of bringing this story to the big screen – is a celebration of Latinx optimism and community. It is based on the Lin-Manuel Miranda play, In the Heights, created way before becoming a megastar with his other Broadway production, Hamilton. The story follows Usnavi (Anthony Ramos), a young man that has a “sueñito”, aka a little dream. He wants to leave behind his life as a bodega owner in New York City and go back to the Dominican Republic, the land of his father.

The musical is vibrant and enjoyable with its multiple numbers (a personal favorite is the opening choreography “In the Heights”). The Latin American rhythm can be felt in every pulse and note, highlighted by the rap sequences performed by the male characters, and felt through the coordinated and lively dances. Through music, we learn that everyone in Washington Heights – the New York neighborhood where the story takes place – has a dream. They have something that inspires them to accept jobs with precarious conditions or exhausting schedules. Just as Usnavi, everyone has a sueñito that keeps them going.

While he is planning on going back to the Caribbean, idealizing the country that he only visited once when he was a child, he is also thinking of his crush Vanessa (Melissa Barrera), a hairdresser that dreams of becoming a fashion designer with her own studio. Meanwhile, Nina (Leslie Grace), Usnavi’s childhood friend, is back in town from Stanford, grappling with her resistance to go back to college and the heartbreak that this decision will cause to her community.

That is the thing with this story. While the little dreams are the intimate motivators, the community is the defining presence in all of their lives. This becomes their blessing and their curse: while they are constantly inspired and supported by others, their personal dreams take a secondary place in favor of their neighbors and friends. Sacrifice is a constant denominator, somehow disguised as community bliss, and there is no notion of individuality.

The link these people share is more important than living conditions, dreams, or external injustices. Usnavi is willing to give up his plans for Vanessa or give up an unexpected fortune for Sonny (Gregory de Vega IV), his undocumented cousin. Nina is willing to go back to university, even though she was racially profiled and despises the place, in the name of Sonny’s future. Vanessa’s conflict is clumsily resolved, instead focusing on her relationship with Usnavi. The film offers an idealized vision of the bond of community, setting too heavy a burden on the characters that could be driven by personal ambition, something that has been historically condemned in Latin America.

In fact, the film has an idealized perspective on everything. Whether some characters idealize the United States (Usnavi’s name and its origin is something to ponder about), others idealize Latin America, thinking that their lives would be much better if they went back, with no acknowledgment of the massive issues that exist south of the border (violence, economic uncertainty, political turmoil, corruption, unemployment, racial discrimination, etc.) that have forced millions of people to try to migrate to the United States. In this regard, I am convinced that In the Heights represents the Latinx experience of those in the United States and not necessarily of those that live in Latin America.

This does not mean that the film isn’t enjoyable. Anthony Ramos is a magnetic presence on screen. He dances, sings, and acts perfectly well, showcasing an enviable charisma. There are several musical numbers that deserve attention, whether because of their ambition (“96,000”), choreography (“The Club”), set design (“When the Sun Goes Down”), or message (“Paciencia y Fe”). This last one, performed by Abuela Claudia (Olga Merediz), the neighborhood’s caregiver, is probably the only number that effectively reflects the conflicting reality of the Latin American migrant.

The other storylines are covered in fairytale ingenuity. The characters’ overwhelming personal conflicts resolve rapidly and smoothly. When there is a blackout in the block, everyone dances together – celebrating their heritage of course – and it ends. When Nina decides to go back to school, there is no practical challenge impeding her way and she swiftly gets over her own case of racial discrimination. When Usnavy and Vanessa go out on a date, a nonsensical conflict separates them, only to reunite minutes later. In the story, there are no consequences in the real world, only motivations that are skillfully resolved in a second.

At the end of the day, In the Heights is a carefully put story of the Latinx experience and community, reflecting the stereotypical ideas of what Hollywood thinks it means to be Latinx. While it is commendable that such a film exists – almost everyone in the cast is Latinx – there are some failures that cannot be ignored. The conversation about colorism and the lack of inclusion of Afro Latinx actors in the main cast is urgent and unavoidable. Also, traditionalism and cliched expectations are present: Is it okay to give up personal goals in the name of traditional expectations and the value of community? Are we to believe that Daniela (Daphne Rubin-Vega) and Carla (Stephanie Beatriz) – two supporting characters that are part of the main group of friends – are a couple, even when there’s a weak wink to their sexual preference? The intention is useless if there is no courage in being clear.

In the Heights works as a sneak peek and promise of genuine Latinx representation. Nevertheless, it still offers a soft and curated view of diversity and community. Ecstatic and shallow, this film proves that it is impossible to showcase in just one product the complex Latinx reality. In order to do that, we need more films created by Latinx people focused on authentic representation.