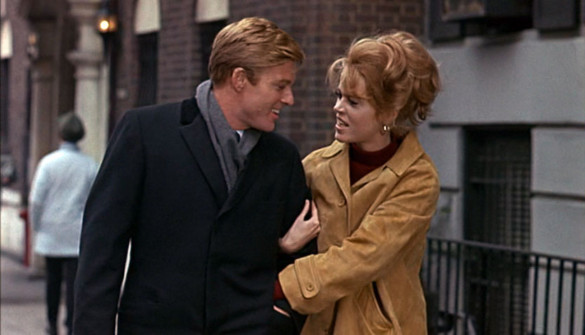 When watching Barefoot in the Park (1967), one can’t help but feel like Jane Fonda and Robert Redford were almost too pretty in 1967. Both of them look like dolls in this film and they’re squeaky clean and strait-laced in a way that is off-putting. Maybe this has something to do with the fact that neither of them had fully blossomed as stars yet. Neil Simon is the real star of the show here and his style of wiring doesn’t go over as well as it did back in the 1960s and 1970s. Fonda and Redford are the big draws in 2021 but right off the bat, I want to warn people that this isn’t a showcase for their talents. This is one of the reasons why the film hasn’t remained popular. It also has the misfortune of essentially feeling like a filmed play that hasn’t really been adapted for the screen.

It’s all about uptight lawyer Paul Bratter (Robert Redford) and his impulsive decision to marry the funky, free-spirited Corie (Jane Fonda). They decide to move into a small apartment together and try to make it on their own. Initially, his career is off to a good start and she finds ways to entertain herself on the days when he is not at home. Their marriage begins to fall apart when their personalities clash and they can’t find ways to deal with the many minor problems that they have to contend with each day. Corie also gets caught up in serving as a matchmaker for her mother Ethel (Mildred Natwick). These diversions drive the young couple apart and they consider the very serious possibility of getting divorced. They have to come to terms with the fact that marriage is more difficult than they expected it to be.

That plot sounds incredibly outdated and it also seems like the setup for a pretty basic sitcom that might play while you’re hurriedly folding laundry before going to bed. It just doesn’t feel like the material for a hit comedy that earned an Academy Award nomination. It just goes to show that the world was very different in 1967. This dated quality occasionally makes the film charming and it is nice to inhabit a fantasy world in which a young couple can afford to live in a nice part of New York City. Of course, Bratter is a yuppie and you assume that he became a Ronald Reagan supporter in the 1980s, but the twenty-somethings of today don’t share the same experiences as the financially stable young adults of the 1960s. It is nice to see an idealized version of this time period and a romanticized depiction of what it might have been like to try to make it in the big city and maintain a relationship at the same time. It’s a nice bit of wishful thinking.

In the end, it’s Simon’s writing and Gene Saks’s slavish devotion to it, that stopped this from working. Simon had no interest in accurately observing the lives of real twenty somethings and his obsessive focus on getting to the punchline is just distracting. There is something schematic about every scene and we know that we can expect an overwritten joke to be lobbed at us every few minutes. He employs lazy contrivances to provide him with opportunities to tell jokes and then doesn’t make the most of those contrivances. When a crack forms in the skylight in the apartment belonging to the Bratters, we have to watch on as snow falls onto the carpet. This is the sort of stuff that would have made an elderly Bob Hope roll his eyes. I just think that Simon’s work was often hacky and deeply artificial that it was hard for any actor to make it believable.

Natwick is the only one who feels like she’s not in a community theatre play. She is warm, witty and above all, natural. None of her movements seem forced and she has a refreshing stillness that makes Fonda’s jitteriness seem even more desperate. The onus isn’t on her to deliver the laughs and she cuts through the layers of artifice in several scenes that would have been totally unwatchable without her presence. She achieves the rare feat of managing to remain above the film she is in. You constantly find yourself captivated by her and want to leave the stuffy little apartment to spend more time with her character.

When you find yourself wanting to spend less time with the central couple, and don’t have that much to say about the on-screen depiction of their marriage, it’s a clear sign that this film didn’t work as a romance. Simon’s writing ensures that the Bratters exist as thin constructs who can be inhabited by half naked attractive people who can awkwardly yelp his one-liners. Everything is painfully labored and Fonda and Redford, as pretty as they are, don’t have any real chemistry. Because he hasn’t written Bratter and Corie as fully formed characters, it’s almost impossible for the audience to feel anything for them. When you’re not laughing, which happens quite often, you notice just how deficient this film is in other areas.

Shame on AFI for including this on such a prestigious list. At least The Goodbye Girl (1977) is far more charming and whimsical than this. Somebody was able to pull the wool over their eyes in this case and voters should feel foolish for giving this a spot on the list.