Movie Review: ‘I’m Your Woman’ is a Film Always One Step Ahead 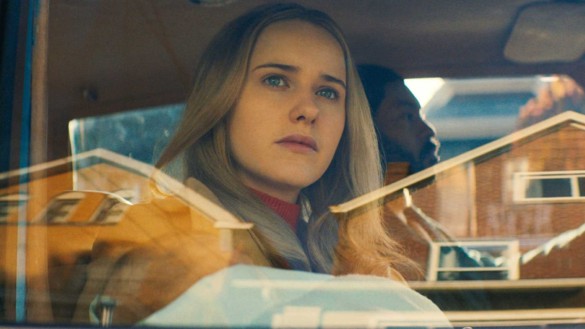 Synopsis: A woman is forced to go on the run with her baby after her husband betrays his partners in crime.

There is a recurring visual motif in Julia Hart’s new film I’m Your Woman where the story’s lead, Jean (Rachel Brosnahan), walks into frame out of focus. As her face gets closer to the screen the camera focuses in on her and she comes into clear view.

Throughout the film, Jean realizes that her life is not what she thought it was. She is constantly having moments of clarity where her past becomes fuzzier while, simultaneously, the present choices before her come into greater focus.

We meet Jean in the fuzziness. In what seems like – if not bliss – at least domestic mundanity, the film begins with the following voiceover from Jean:

This mundanity is broken in the film’s first scene. Eddie (Bill Heck) comes home holding a baby. From that initial voiceover, we understand that this is a surprise. Just how much of one will be revealed later. After an abbreviated breakfast, Eddie is off again. Jean is once again left to handle this new surprise alone.

The script is written by Hart and her husband, Jordan Horowitz, the team that previously brought us 2018’s Fast Color. Hart and Horowitz weave a fantastic story here. This script always keeps a handle on what elements to reveal and what to hold back. In this way, the story always stays one step ahead of the audience. There are enough twists and turns that it would be easy for the script to spin out of control. But it never does. Instead, the story pulls us in until we’re fully invested in these characters and what happens to them.

The film hinges on the performance of Brosnahan. It simply would not work without a strong performance from her, and she more than delivers. Brosnahan shot to superstardom with her lead performance on Amazon’s hit show The Marvelous Mrs. Maisel. Thankfully Amazon realized her skill and backed this film (which Brosnahan also produced). If you know her from Maisel, you’ll see a different side of her here. This story is far grittier, but Brosnahan doesn’t shy away from anything thrown her way.

Hers, however, is not the only strong performance. Marsha Stephanie Blake and Arinze Kene both give strong supporting turns as Teri and Cal, two characters who loom large over most of the story. They also play in most of the twists and turns, so I’m going to intentionally leave out much description of their characters. Suffice it to say that, after the film’s early scenes, Jean finds out just how alone she is before her story becomes inseparably intertwined with Teri and Cal’s. The final performance I’d like to note is from the wonderful character actor Frankie Faison as Art, Cal’s father. Faison will be instantly recognizable to fans of The Silence of the Lambs and Do the Right Thing as well as many other acting credits since. He always brings a warm presence, even to films such as this one that would not be quickly described as “warm.”

This film also reminded me of one of the best film’s in recent memory – Steve McQueen’s 2018 heist film, Widows. That was another film where a wife (in that case, multiple wives) was thrown into the world of crime that her husband had entered. That film played up its ensemble cast into a story about the group. While multiple characters play key roles in the story of I’m Your Woman, this film instead focuses on Jean’s story of self-realization. The deeper we get into the story, the more we understand about her, and the more she understands about herself. This is her story, and she owns it.

Just about the time you think you have this film sized up, it moves in a new direction. Early on, the story invests us in the relationship between Jean and her new son – Harry. That relationship is always key to the film’s story, but the narrative moves away from it at key moments. In these moments of separation, we learn so much about Jean and of what she is capable of.

The film deftly mixes genres, too. At times, it is an insular character study. At others, it is a drama about family. Near the end, it becomes a full-on action film with gunfights and car chases. At every flashpoint, the script has done its diligence to set moments up and pay them off accordingly. This is a testament to the work of Hart and Horowitz on the script.

From there, it is Hart’s direction that elevates the script. I began the review with her recurring focus motif, and that helps us understand – even if subconsciously – the feelings that Jean is experiencing. I also appreciated Hart’s willingness to keep the camera static in key moments where we are feeling the insularity of Jean’s story – when the camera holds on little Harry’s face, for instance. At other times, when the script changes pacing, so too does the camerawork.

Don’t sleep on this film. With COVID-19 forcing many films to move to streaming services early, there are quite a few options for viewing. But I think Brosnahan’s performance is one of the stronger lead performances I’ve seen this year, and I’m Your Woman succeeds because of it. The script is one of the year’s strongest, too. Put it all together and you have a high-quality film that should certainly be on your list of films to watch before you close out your year-end list.