Movie Review: ‘Fast Color’ gets in the way of its own path to greatness 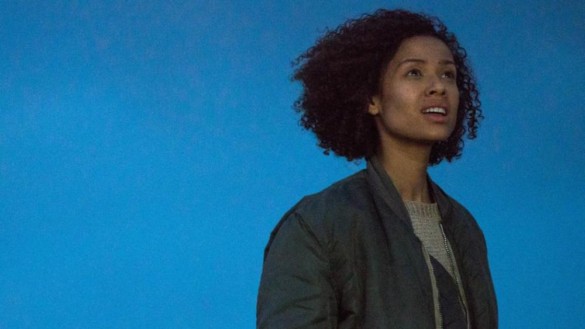 Synopsis: A woman is forced to go on the run when her superhuman abilities are discovered. Years after having abandoned her family, the only place she has left to hide is home.

From the title of Fast Color, you might come in expecting a flashy, action-packed adventure of a film. For much of the film’s opening half, you’d be left wondering whether you have the right title playing because there isn’t much color and it certainly isn’t fast. But we’re getting there.

Fast Color follows the story of Ruth (Gugu Mbatha-Raw). When we meet her, she is on the run through the desolate landscape that is this post-apocalyptic setting. Water is scarce. The world seems to be coming to an end. And there’s something about Ruth that is just…off. A scene where she alerts a hotel owner to take cover and then begins shaking violently in her bed lets us in on her secret.

However, other than the fact that she was some kind of power and she is on the run, we don’t really know much about Ruth. We’ll gain some key elements throughout the rest of the film, but she most remains an enigma. This is the defining flaw of the film, in my opinion. For all the film’s honorable qualities, and they are many, it can never get over the fact that its main character is not all that compelling because she is never really developed. That is a difficult obstacle for a film to overcome, if not an impossible one.

But let’s get to the good parts, shall we?

The film’s music is fantastic, particularly the use of Germ Free Adolescents by X-ray Spex. The acting is solid, especially supporting performances from Saniyya Sidney as Ruth’s daughter, Lila, and the indomitable David Strathairn as Ruth’s father, Ellis. The cinematography is beautiful, particularly in a few awe-inspiring moments where Ruth and Lila’s powers are put on display. Speaking of those powers…

In the film’s opening scene, we learn a key element. Broken things stay broken. These powers that Ruth and Lila have seem to be some kind of ability to break objects down into particles and reform them. This can be done with something as small as a bowl or something as large as the sky. Once the feat has been performed, they see fantastic colors. This signifies an ability to control these powers. But, while Lila has pulled this off, Ruth has not seen the colors for years. Ever since she became sober, her powers have been completely uncontrollable.

There’s a powerful argument to be made that this film is a love story to the creative process. That the power of creativity threatens to push creators into solitude despite that fact that others out there have the same power.

There’s also an argument to be made that this is a superhero film for people who aren’t all that fond of superhero films. Fast Color eschews the flashy pulp and bloated storylines of most modern superhero movies for a plot that is laid absolutely bare. In the place of fast-moving arcs, this film has a slow, methodical approach. At times, I think the pace comes to a bit of a halt, but I can’t deny that it was a refreshing take on the superhero narrative.

At the same time, no matter what you think of superhero movies, one thing you can’t say about them is that they don’t care about their characters. I’m not the biggest Marvel fan you’ll find out there, but I can’t deny that they have done an incredible job of developing characters over time. Fast Color would be a better film by giving its characters, especially Ruth, more of an emotional connection to the audience. As it stands, the moments that are supposed to hit emotionally feel stunted by a lack of connection the characters.

As I said before when discussing the film’s cinematography, there are moments of sheer awe in this film. One takes place at the dinner table, as the film’s score comes to a rousing crescendo. These moments almost take the film to a transcendent place. But something always holds it back. Even as it reaches for its inspiring message of finding your voice and realizing your true power, it falls a bit flat.

All in all, I was impressed with this film and I enjoyed it. This is an ambitious project from director Julia Hart, who is a talented artist in her own right. There’s a lot here to like, and you can see the pieces of an incredible film here. But those pieces never quite come together, and the viewer is left wondering what might have been.