Movie Review: “Falling” is an Effective Drama in Need of More Complexity 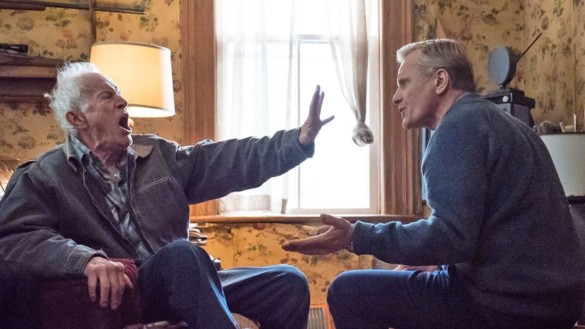 Synopsis: When 80-year-old independent farmer Willis travels to Los Angeles for an indefinite stay with son John and his family, two very different worlds collide. Mentally declining, Willis’s abrasiveness is both caustic and funny, bringing old wounds from the past and years of mutual mistrust to the surface.

There’s a deep sadness at the heart of Falling. Centered around an ailing father moving to California to be with his son, Viggo Mortensen’s debut as writer-director is a reflective investigation into the complexity of fatherhood, aging, and memory, and pointedly asks the audience a series of uncomfortable questions. What happens when you’re caring for the man who undermined and bullied you throughout your childhood? How do you battle your resentment for someone not in control of their mental faculties? How do you forgive someone who can’t remember what they did wrong?

These are all questions approached by Falling but rarely do we feel they’re being properly tackled. The film is a mostly effective drama, thanks to some creative filmmaking flairs and the bracing unpleasantness of the father Willis (Lance Henriksen), but the depth suggested by the story’s themes is never fully realized.

Two narratives run concurrently to each other throughout the film; the first shows adult son John (Viggo Mortensen), living with his husband and daughter, attempting to facilitate Willis’ transition from his lonely New York farm into his family’s life out west. The second is John’s childhood, showing how his father (the younger Willis played by Sverrir Gudnason) mistreated his children and partners throughout his life. It’s unclear if this is supposed to be a flashback, as we’re not certain all of the time if it’s John or Willis memory we’re delving into, meaning it can sometimes get confusing whose perspective is being colored.

The power balance is the most obvious difference between these two narratives – while the younger Willis exercises control over his family with a set of unwavering traditional values, the older Willis is constantly belittled by those who have outgrown his conservative outlook. Both versions of Willis are prone to spiteful rants when their authority is questioned, but while the younger Willis feels intimidating, the older one feels pathetic.

Mortensen seems to be focusing on his directorial duties, taking a backseat in his performance. His portrayal of John is largely quiet and natural, and John himself seems occasionally passive to the unpleasantness of his father, making it unpredictable which of his dad’s mistakes he will confront and which he will let slide. It may not be particularly captivating, but it’s a realistic portrayal of the exhausting process of caring for a bitter, ill relative.

Willis is by far the most compelling character in the film, thanks to the two strong performances of each version of him. In his intense stares and flares of anger, Gudnason captures Willis’ steadfast pride that he can’t see is tearing his family apart. But Henriksen, in potentially the best performance of his career, shows us a Willis weathered by changing times and continuous estrangement, lashing out at anything that reminds him how weak he now is. His bigotry, shown in vile homophobia and misogyny, comes so easily and casually from his mouth, it’s seemingly ingrained in him. His disgusting attitudes and mean-spirited vitriol have gone unchallenged for too long, and now it’s too late to change any of it.

Willis’ dementia is not delved into in any great depth, but it is showcased in some interesting ways, specifically in Marcel Zyskind’s cinematography. While Willis is talking, the camera angle shifts in unexpected ways, pushing close up in invasive and claustrophobic shots that catch Willis off-guard. At one point, the camera jumps directly in front of him, making him look down the barrel of the camera in a sudden act of disorientation. Showing us Willis’ perspective, how the deterioration of his faculties is unsettling him, is crucial for understanding why his nastiness so frequently is on show. When your ability to recognize the reality in front of you is impeded, you’re likely to think the world and everyone in it are out to get you.

These are isolated details, however, in a story that too often diverges into being a shouty drama. One particular family dinner scene with the families of John and his sister Sarah (Laura Linney) acts as a catalyst for Willis to spout insults and for his alternative grandchildren to disavow him. But throughout the long scene, it doesn’t seem like the argument moves anywhere specifically. If Mortensen was aiming to capture the realistic rises and falls of a family fight, then the dialogue is too forced and pointed, and besides, realistic fights still need to have a narrative focus.

The drama of the film seems to be entirely predicated on a series of arguments that come with such a frequency that it’s entirely possible to phase out, not registering the details of what defamations the characters are hurling at one another. Granted, we do get to see a great array of awkward waiters witnessing family quarrels in public restaurants, but it’s not really a substitute for what the film should be getting at – the unstable dichotomy that is resentment and forgiveness.

The relationships are certainly complex, and Mortensen does a commendable job of arguing how we need to accept the complex, conflicting nature of memory, but like John reflecting on the fractious relationship with his father, we’re left wondering why things didn’t turn out better.