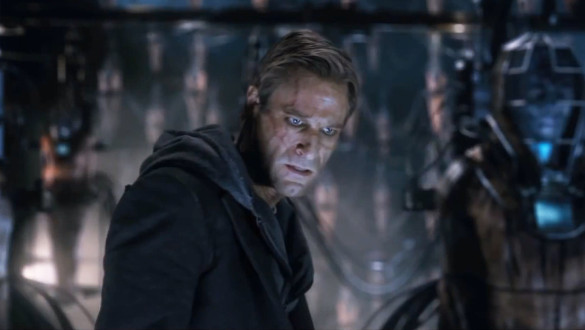 Synopsis: In a dystopian era, Adam Frankenstein becomes involved in a war between a clan of gargoyles and a clan of demons in an ancient city.

INTRO
We all know the story of Frankenstein a creation by Victor Frankenstein. Over the years the image of Frankenstein has changed but is the latest installment something that Mary Shelley would be happy about or is she turning in her grave? Director Stuart Beattie brings us I, Frankenstein, which stars Aaron Eckhart, Bill Nighly, and Yvonne Strahoivski.

DIRECTION
Having the producers of Underworld (my favorite movie series) involved in this film is both good and bad. The great thing is that you can expect amazing visuals effects and a dark theme resonating in the film. The bad things, however, is that you can also expect very similar story lines in fact this film has the same basis that Underworld has. Beattie does a very poor job of representing Frankenstein as we get no real back story and he is hiding in the shadows most of the movie and it seems to me like he was better suited as a side act rather than the main attraction. I also understand that Frankenstein needs to look different but how it appeared on screen was that he simply had scars on his body and didn’t seem like he was “made”. The demons were also poorly done and I was unsure if I was supposed to laugh or be scared. One thing that I found annoying more than anything was the fact that every time a gargoyle or demon died there was a beam of blue light or flames respectively. The one bright spot for Beattie was the amazing work he did with CGI. The visuals in this film were amazing and nicely shot for the most part.

SCRIPT
There is a war going on between good and evil and in between stands one Selene, I mean Frankenstein. Having the exact same premise of Underworld really blew it for me. The difference between Underworld and I. Frankenstein is that there is absolutely nothing that keeps your interest in this movie. The characters are boring and the dialogue is horrendous. The funniest part of the film to me is when Bill Nightly character reveals his demon and says, “I am a Dark Prince” because it is obvious by that point that he is the leader of the rejected cast from the 1991 TV series Dinosaurs. Beattie starts off by rushing through Frankenstein’s origin and then poorly explains why the demons and gargoyles are at war.

PERFORMANCES
I know Aaron Eckhart and Bill Nighly are both better than this film so I am going to give Harvey Dent a pass for this movie. Eckhart did not play a bad role I think the character was just bad overall regardless of who played it. Jai Courtney brought the same skills from A Good Day to Die Hard, so you can imagine how things went. No Oscar worthy performances here.

SCORE
Surprisingly, I,Frankenstein has a wonderful score. During the credits I saw two familiar names: Reinhold Heil and Johnny Klimek. Heli and Kilmek have done the score for such films as: Run Lola Run, The Princess and, of course, Cloud Atlas. The duo uses a nice mix of big orchestra sounds with strings and bass that help provide a “gothic” feel to the music. Being an action movie the movie will be slow at some parts and then fast at others and Heil and Kilmek are successful at keeping pace with the film. My two favorite songs are “Ride of the Gargoyles” and “This Body is mine”. If you were thinking about watching this film I think your money will best be spent on the Soundtrack.

IS IT WORTH IT?
If it is not obvious by now, then NO I cannot recommend this film at any time including Redbox or Netflix. I watch over 100 movies a year and I say that this movie will probably end up on my worst list of 2014.