Movie Review (Sundance): ‘How It Ends’ is a Story of Self-discovery in the Face of Destruction 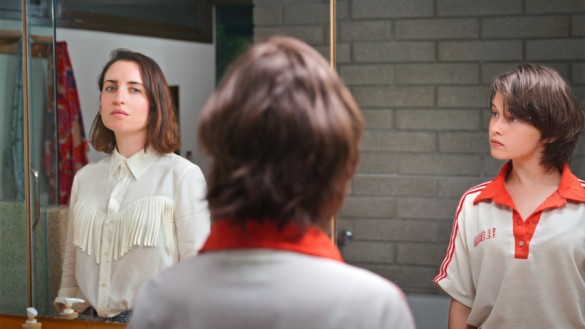 Synopsis: On the last day on Earth, one woman goes on an internal and external journey through Los Angeles finding both herself and an end of the world party.

Having worked together for 11 years, Zoe Lister-Jones and Daryl Wein have become regular voices in American independent cinema. Together they have created movies such as Breaking Upwards (2009), Lola Versus (2012), and Consumed (2015); while developing careers of their own (just last year, Lister-Jones released The Craft: Legacy, and Wein has been steadily working in television).

Now, not being deterred by COVID-19, but rather inspired by it, they took advantage of this peculiar time to write and direct How It Ends, their first collaboration as co-directors. The movie is about the end of the world, strategically filmed in the Los Angeles area during the isolation phase of the pandemic.

The result is a sweet movie in which the apocalyptic environment is evident beyond its plot, whether because of the eerie emptiness of the streets and highways, or the physical space and lack of physical contact amongst the characters. This film is one of the most satisfying portrayals of the end of the world presented in a moment where that feeling is unavoidable in our lives (a direct contrast to fellow Sundance selection The Pink Cloud).

How It Ends follows Liza (Zoe Lister-Jones) on the last day on Earth. A meteor is scheduled to hit the Earth sometime around midnight. Determined to spend her last hours alone, she is convinced by her younger self (a perfectly cast Cailee Spaeny) – who always follows her around – to instead “tick off her regrets one by one” and to go to an end-of-the-world party. The outcome is a quirky and sweet story about making peace with our personal monsters, including self-destructive thoughts and self-hatred, even in the face of extinction.

As the movie begins, it is evident why it would premiere at Sundance. With its optimistic and eccentric score by Ryan Miller, the discreet and unassuming style, and the evident use of personal possessions for the creation of the movie– including houses, cars, and wardrobe– How It Ends has the total essence of an independent production, even though the luxury is unavoidable when elements of the real life of the stars spill in front of the screen.

In this regard, the story written by Lister-Jones and Wein does not stray far away from the reality of their lives, making it possible for the two Lizas to wander around Los Angeles and even encounter some famous friends along their way. Just as the movie is about forgiveness and sincerity, it also reflects the nihilism of American culture – every character is focused on having a good time during the last hours on Earth – and the fact that L.A. is filled with stars.

Every single character that appears – even for just a couple of minutes – happens to be a Hollywood star. Their identification sometimes even threatens to distract us from the plot of the movie, which presents eccentric reasons for the appearance of the likes of Olivia Wilde, Helen Hunt, Lamorne Morris, Charlie Day, and Glenn Howerton. Some of these encounters work and some of them feel like gratuitous inclusions. Without surprise, the ones that are related to the emotional turmoil of Liza are the most satisfactory. Nevertheless, most of the jokes that bloom from these interactions succeed because of an awkward and dry sense of humor. For example, while silly, the conversation between Liza and Wilde’s character reflects the absurdity and ridiculousness of American society.

The relationship between Liza and her younger self is the source of success of the story and the reason why we care for the character (although a frustrated love story with Logan Marshall-Green is also appealing). A constant denigration of adult Liza towards teen Liza gives us a glimpse into the traumas and self-acceptance issues that afflict the character, something that is hurtful and unacceptable for young Liza, considering that her happiness and optimism is threatened by the cynical point of view of her future self. The attempts of young Liza to brighten the life of her future self are futile. How can you save yourself from your own destructive nature? How can you be kinder to yourself if a feeling of self-hatred is now part of your personality? The exploration of these questions creates a great juxtaposition to the apocalyptic nature of the setting. More than a movie about accepting faith, it is a story about learning to love yourself.

How It Ends is a discreet story that offers an uplifting point of view in the face of disaster. It shows that it is never too late to be kinder to yourself. Its scope and intentions are small, and some of the jokes are not always successful, but what it has to say about self-love is too loud to simply dismiss. Considering that the movie is defined by a sense of finality, it is quite uplifting that it aims to help us feel good about ourselves, even in the face of uncertainty.