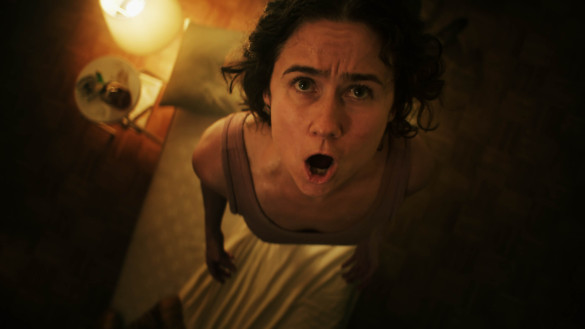 Synopsis: A coming of age psychological thriller that plays out the unsettling reality of a kid who holds his family captive in a hole in the ground.

The thinness of walls is a thoroughly explored trope in horror cinema. The fear of urban living and the closeness of evil in cramped apartment buildings is probably most well-known from Rosemary’s Baby, a film that Swedish paranoia-drama Knocking owes a lot too. When Molly (Cecilia Milocco) is discharged from a psychiatric hospital, she moves into a claustrophobic apartment block, only to be plagued with a persistent knocking on her walls. The knocking leads to a voice crying for help, but as her neighbors and the authorities can’t find any evidence of anything wrong, Molly starts to panic that she’s losing what little grasp on reality she has left. Knocking is at its strongest when the narrative focuses on dramatizing her mental illness and showing how women are sidelined and belittled by louder voices, but it still lacks the edge needed to make it a memorable watch.

Director Frida Kempff teases out the source of Molly’s trauma in a series of flashbacks, first seen in an eerie shot looking down at a beach before sticking to close-ups of Molly that restrict our view of a terrible event, rooting us in her perspective as she realizes she should have been more aware and present. The intimacy the camera has with Molly rarely gives up throughout the film as she finds her place in the narrow corridors and cramped rooms of the apartment building. The more she starts reaching out to people, the more they start judging her, making us uncomfortable with her in this new environment.

Credit has to be given for the subtlety in writer Emma Broström’s script – the neighbors she’s surrounded by rarely feel overtly unpleasant or manipulative. A weaker screenplay would dial-up their hostility to excessive levels from the start, but instead, we see their patience being gradually tested by Molly’s increasingly erratic accusations and fears. Our allegiance is always with Molly though, we can empathize with her as she paces around looking for the source of the knock even as she intrudes on other her neighbors’ homes. Molly doesn’t see her invading their private lives as a problem, because she believes her privacy was invaded first by someone signaling for help.

What’s most fleshed out is the fragility of Molly’s mental condition. In another subtle move, Kempff and Broström choose not to explain Molly’s symptoms, instead, we pick up from her actions the obsessive nature of how she acts and behaves. This is brought to life by Milocco’s delicate performance, which also manages to capture a quiet sweetness to Molly that means we care about her as her mind starts to unravel. We get the feeling that Molly wishes she could have done something to help at the traumatic event at the beach, meaning she’s hyper-aware of the possibility that someone may be suffering while she’s doing nothing to help.

As the knock continues to bother Molly, her attempts to adapt back to normal life are complicated by her discomfort of those around her. Pushed to settle into her new home by a doctor over the phone, Molly sets out to purchase stereotypical signifiers of brightness and healthiness, namely fruit and flowers. When talking to staff, however, Molly encounters a series of micro-miscommunications that gradually dial up her stress and crowd the frame. These obstacles in finding tranquility in her new home are, like the incessant knocking, a reminder that avoiding her trauma is not going to be as easy as she hopes.

While all of these details are appreciated, Knocking overall suffers from not being very gripping. At 78 minutes, it still at times feels like it’s dragging, and its association with apartment-paranoia movies means its overall narrative design can feel a little predictable. We know that the film would flip between thinking the knocking is coming from a person and thinking it’s all in Molly’s head, and we can see each successive turning point coming as soon as the scene starts. As Molly spends considerable time trying to figure out if the knocking is morse code, believability starts to be strained – by now it’s a tired trope that does little to engage an audience, but more importantly someone beating out morse code is a far less thrilling concept than it just being the senseless pressing against the walls by someone letting you know they’re there.

Going into Knocking thinking it’s a horror or thriller means you’re bound to be disappointed, its focus on tiny details and expressing the interiority of its protagonist means that there are not many chills to be had besides a general state of unease. It’s important to not criticize it for being a different kind of movie than expected, but it still could have used higher stakes and more compelling turning points to keep its audience engaged in its pointed and streamlined character journey. Knocking should be rewarded for its portrayal of suppressed trauma and playing out its story on such a small scale, but it should be a more arresting watch for the themes at play.