Movie Review (Sundance): ‘Homeroom’ Delivers a Punch in the End 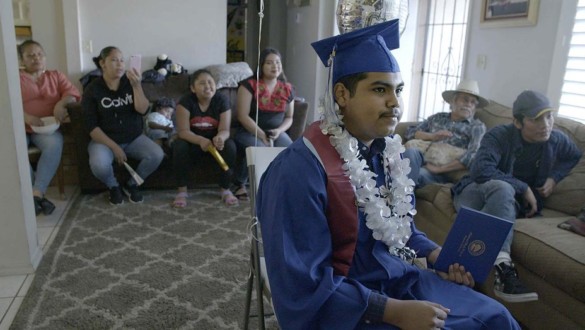 Synopsis: Following the class of 2020 at Oakland High School in a year marked by seismic change, exploring the emotional world of teenagers coming of age against the backdrop of a rapidly changing world.

The way this documentary is told can take a while to get used to. There is no narration, no single focal point, and no post interviews inserted in. Instead, this is a documentary that captures the lives of these students at Oakland High School in their senior year. Whilst it is clear that there would be struggles for these students to face as the class of 2020, it takes a while for the film to develop up to that point.

It was a struggle to get through the first half of this film. It felt directionless as if these students were simply filming their school year to look back on memories. It does make sense why it takes a while for this film to get going and for a narrative to form, as there was no way to predict what would happen and what issues would make an impact within this class. Whilst there are certain scenes that do stand out in the first half of the film, it was hard to connect with these students through the perspective that we get and a lack of narration or interview sequences to expand on their mindset.

It is nice to see that the students got to be so involved with the filmmaking itself, however, Not only are there inserts of social media posts that they recorded and uploaded, particularly on TikTok, but some of them are actually behind the camera. It feels like they were happy to take charge and to make their ideas heard, something that does come through in this documentary. It still feels like a professional documentary, but it is nice that the students got so much control over shaping the direction and what message they wanted to get across, considering many of them are also activists.

This documentary starts to get going in the second half, once they enter the year 2020. Whilst unplanned, COVID-19 ended up being a big part of this film. It is particularly interesting to see the students’ reaction to the virus, both when it first started and when it caused the school to shut down, forcing everyone to study online for the rest of the year. Watching the students graduate in their own home is a dark reminder of what impact COVID-19 had on students and how many adjustments they had to make to finish off their year.

When this film works is when the students are standing up for their beliefs, giving a sense of optimism for the next generation in the near future. In particular, there is an arc that runs through the film with the school council and the decision to have police in the school. Not only do these scenes show the students fighting for what they believe in and continually pushing for the school council to do the right thing, it gives the film conflict and something to try and resolve.

Students were arguing against the need for police in schools from the start of the documentary, and yet this film also presents the situations that occurred in 2020 with the Black Lives Matter and Defund the Police movements. Just like the COVID-19 aspect, this would not have been considered when starting to film this, but it ended up being a major part of this final half. The footage of the students going out on the streets, stepping up for what they believe in, and capturing it for this film is incredibly powerful and gives a strong message. It is incredibly impactful to see these students witness these events and decide to be a part of the crowd, making their voices heard for what they believe in.

Whilst I do wish the film could pick up the pace a bit and have some more focus at the start, it is hard not to be won over by the end of it. With numerous films out there questioning our trust in the next generation to lead us, it is refreshing to see a group of students who are willing to take charge and make good decisions. Whilst their year may have been heavily impacted by certain events, they should all be proud of where they ended up and the potential they all have going forward. There is reason to be optimistic about the future.