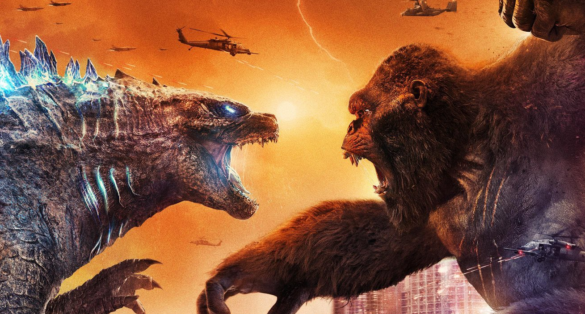 Synopsis: Two of the greatest icons in motion picture history fight against one another – the fearsome Godzilla and the mighty Kong – with humanity caught in the balance.

We need to be honest with ourselves, we miss big-budget action films. With the release of Zack Snyder’s Justice League, WandaVision, The Falcon and the Winter Soldier, and now the latest film in the ridiculously titled ‘MonsterVerse’, it’s clear what kind of entertainment that’s been missing on a regular basis since the beginning of the pandemic and what people want to see moreover as they get back to a sense of normalcy. And what can be more normal than a giant lizard fighting a giant monkey by land and by sea, right?

Picking up after the events of Godzilla: King of the Monsters, and decades after Kong: Skull Island, we find out two titular characters butting heads for the first time on screen in close to fifty years. With Kong, he is living in a habitat, enclosed from the world and oblivious to everything around him. His enclosure is a digital representation of his home on Skull Island, where Dr. Ilene Andrews (Rebecca Hall) and her adopted daughter Jia (Kaylee Hottle) are in charge of taking care of Kong. Meanwhile, out in the real world, Godzilla is on a rampage, destroying many Apex Cybernetics facilities, run by Walter Simmons (Demián Bichir). In order to stop Godzilla from continuing to rip apart the world, Simmons assigns Dr. Nathan Lind (Alexander Skarsgård) to team up with Dr. Andrews and get Kong to come back into the world to stop Godzilla. But to do this, they will need to go on a mission with the giant primate that will unlock the secrets of both species, thus unleashing an ancient rivalry of monumental proportions.

Are you keeping up here because it’s a lot to take in. But, to be honest, audiences aren’t supposed to go into these films for the plot (if you want that, go watch any of the films nominated for Best Picture this year). We come into these movies wanting to see big monsters fight one another, delivering carnage wherever they go, taking no prisoners in the damage they cause. It’s why this is one of the most popular IPs of all time because we’ve all seen some version of these movies with these two blockheads destroying each other or foes from deep within our world. But Godzilla vs. Kong finally gives us what we all wanted, which is a ton of over the top action, shot within impeccable lighting so we can actually see what is going on in all the battle sequences.

Credit this to Adam Wingard, a director who started with small indie pulp films last decade and now has transitioned into a stable director who can make decent properties good. By no means does he elevate the script and the human characters, who are thinly written and almost slow the momentum down of this project. But he does have a true scope and visional flare to the action sequences that make them all stand out to anything we’ve seen over the previous three entries in this rebooted franchise. Both the day sequence at sea and the night fight in Hong Kong perfectly capture some much needed flair to show every angle of this fight, so we fully know who has the upper hand (even though the dumb humans tell us as well, ugh).

Beyond the visuals, the world building, and seeing these two big creatures fight, the rest of the film is a bit of a mess. All the human characters, including the team of Millie Bobby Brown, Brian Tyree Henry, and Julian Dennison, are just downright awful. The only people that bring anything interesting to the story are Hall and Hottle because of their connection to Kong, other than that, the rest of them are just in the way from us seeing more of these guys go toe to toe for two hours straight.

Even though the humans are the sour mark on the overall film, Godzilla vs. Kong is still an enjoyable, action packed adventure that you will enjoy from beginning to end. The final 30 minutes of the film is worth the price of admission alone. And by the end, no one knows where they will go next, but the franchise seems to be going in the right direction. Hopefully, it can finally fix its human problem in the next installment in the way they fixed how we see the action sequences in this one. If that happens, WB might have something special on its hands. Till then, they have this.