Movie Review: “Zack Snyder’s Justice League” is an Improvement, but Not Much 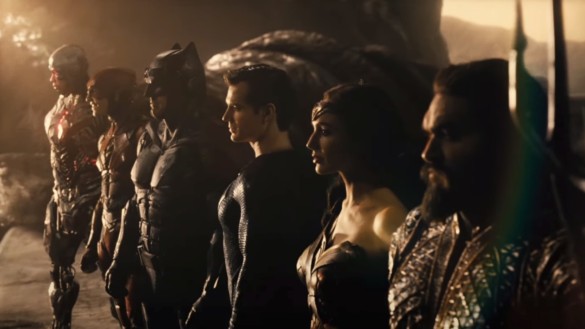 Synopsis: Fueled by his restored faith in humanity and inspired by Superman’s selfless act, Bruce Wayne enlists newfound ally Diana Prince to face an even greater threat. Together, Batman and Wonder Woman work quickly to recruit a team to stand against this newly awakened enemy. Despite the formation of an unprecedented league of heroes-Batman, Wonder Woman, Aquaman, Cyborg, and The Flash-it may be too late to save the planet from an assault of catastrophic proportions.

In the fanboy fervor that will no doubt enshroud this release, it wouldn’t do to get ahead of ourselves. The Citizen Kane of superhero movies, this is not. Yes, Zack Snyder’s redux Justice League is better than the much maligned Joss Whedon release. Yes, this version is more comprehensive, more detailed. Yes, it makes more sense and won’t have you thinking “wait, what’s happening now?” every five minutes. And yes, it gives some much, much needed character development – especially to Cyborg, who becomes something of a centerpiece here.

But the issues that have plagued the DCEU since its inception are still here on full display. Convoluted plotlines, bone-achingly bad dialogue, tonal inconsistencies, about as subtle as a brick through a window, and necessitating a Ph.D. in comic book lore in order to fully understand the depth of what’s happening. In its rush to play catch up with Marvel, DC have thrown everything at the wall, hoping something will stick. Though they were late to the cinematic universe idea, they would be better served playing the long game, building up their world piece by piece before going for the big pay-off. The hope was that Zack Snyder’s Justice League might mark the end of this era of the DCEU and pave the way for a new, more consistent era – especially given that ending – but a recent comment by DC Films President Walter Hamada calling this movie “a storytelling cul-de-sac” indicates there is no purpose whatsoever in any of the breadcrumbs laid here, except fan service.

First, the good. Snyder has restructured the narrative, making it much clearer what’s happening. In place of the excruciating exposition overload of the original, Snyder creates a flow which allows both The Flash and Cyborg the space to develop their characters. Cyborg in particular benefits from a backstory which shows him as a college football hero whose life is forever altered in the wake of a car crash. This gives Ray Fisher the chance to display some of the depth of Cyborg in a way that didn’t make sense the first time around. It’s arguably the best change Snyder made. As well as this, the decision to cut the movie into six chapters was a good one, and helps create a sense of epic proportions which pays off well. It’s a much better build up, and accounts for the majority of the extra runtime as well as boasting an epilogue somewhere around the 30th-hour mark that feels a little Return of the King-esque. Finally, the score is an impressive addition (if a little too center-stage; it feels like it overshadows the action at times) and feels of a piece with this world, much more so than Danny Elfman’s did (though that is no slight on Elfman, one of the best in the business).

As well as this, vaunted major villain Darkseid finally makes an appearance, giving some character development to Steppenwolf and inducing the whole plot with a more sinister undertone. The graphics are updated and the villains are much better represented here, something which was sorely missing from the original.

The majority of what’s on display here, you’ve already seen. The narrative is the same, the story arcs the same, the ending virtually unchanged. When Snyder left the original Justice League movie due to a personal family tragedy, Whedon stepped in fresh off his success (or failure, depending on your view) of Avengers: Age of Ultron. He was tasked with lightening up the world, inserting a little of the trademark Whedon humor to stop everything from being so relentlessly grim. Snyder has no time for that; every extra piece of filming Whedon done is gone. Aquaman sitting on the Lasso of Truth? Gone. Flash accidentally falling onto Wonder Woman’s chest? Gone. It helps with the tone, of course, but it means things go back to that grimness which the DCEU feels awash with. Only Flash is presented as comic relief here (unless you count Jeremy Irons’ Alfred, who is not on screen long enough to claim that honor), and his particular brand of humor is very hit or miss. As well as Whedon’s humor, gone is Whedon’s snappy, sarcastic dialogue – which played so well in Avengers but felt a little out of place in the Justice League.

Unfortunately, Snyder’s recut can’t hide some of the major flaws. At a punishing 4 hours long, Justice League suffers from fatigue at times, unable to sustain the various threads it attempts at once. A little levity might have helped, but when every scene is doom and gloom, with little variation, it becomes difficult to stay focused; you find yourself rolling your eyes, wishing it wouldn’t take itself quite so seriously all the time. If the original was bloated – and it certainly was – adding an extra hour or so on top isn’t helping matters.

And so devoid of any humor, we get four hours of gruff, broody dialogue like “I will bathe in your fear” and “a strong man is stronger alone”. Each character fulfills their stereotype without any wryness – Ben Affleck will stare moodily into the middle distance, Jason Momoa will remove his top and show off his impressive torso, Ezra Miller will be awkward and overawed, and Henry Cavill will smile solemnly as he almost single-handedly saves the day. It all feels a little rote.

With the shaky foundation still, the same, Snyder can’t save the Justice League entirely. What he’s done is make a more coherent story, allowing his characters – heroes and villains – the opportunity to develop. This is a welcome addition. Unfortunately, Snyder has also brought an almost overwhelming doom and gloom back to the DCEU and his particular cinematic traits – an overreliance on CGI to the point where everything looks like it’s taking place on an artist’s canvas instead of the real world; brute-force storytelling in place of anything even remotely subtle – still mar the whole thing.

DC fanboys will find much to love here, though. Zack Snyder has essentially paid homage to the fans who willed this movie into existence based on a #ReleaseTheSnyderCut hashtag. There are plenty of Easter Eggs and much fan service, but for those of you who consider yourself a casual DC – or even just superhero – fan, it may be better sticking to the original.