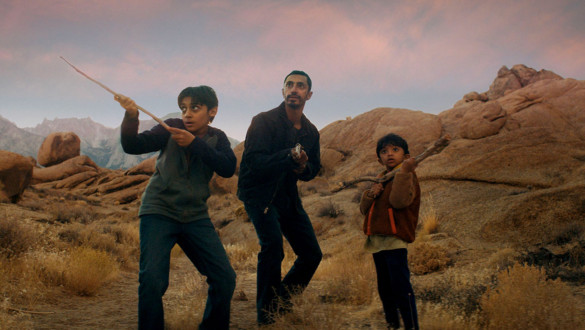 Synopsis: A decorated Marine goes on a rescue mission to save his two young sons from an inhuman threat.

Riz Ahmed doesn’t seem to stop. After having an outstanding 2020 that included an Oscar nomination for his role in Sound of Metal, and multiple BIFAs for Mogul Mowgli and The Long Goodbye, Ahmed is back in the festival circuit with Encounter, a sci-fi film that distinguishes itself for its clever story and the family drama at its core.

Co-written and directed by Michael Pearce, who turned heads in 2017 with the psychological thriller Beast, Encounter maintains the sense of discomfort and suspicion that made of his directorial debut such a success (launching Jessie Buckley’s career and offering a new facet of the always affable Johnny Flynn). As with his previous film, nothing is what it seems, maintaining the audience at the edge of the seat with constant revelations that feel equally unexpected as shocking.

In the Encounter’s scenario, the Earth has been invaded by microscopic organisms that latch onto humans, making them violent and irrational, and provoking utter chaos as the infected start flooding the streets. Malik Khan (Ahmed) is a former Marine that has the mission of retrieving his two sons – Bobby (Aditya Geddada) and Jay (Lucian-River Chauhan) – to take them to a safe haven somewhere in the United States. Prepared, lethal, and determined, Malik sets out on his quest.

While the details of the world invasion are left unexplored, Pearce uses impressive visuals to illustrate the bug threat. With detailed and colorful animations, he explains the way the insects invade the cells. He creates pandemonium through the incentive to use one’s imagination. His sci-fi film flirts with horror as he uses the current feeling of uneasiness in the real world to create more panic. The fact that the havoc is created by organisms that can be found anywhere and everywhere, adds a new layer of alert.

The tension is compacted and intimate, with Malik being the only one that reacts to the pressure of the alien invasion. This narrow point of view only intensifies the tension with sudden camera movements and an outstanding sound design. Just as with the previously mentioned Sound of Metal and this year’s The Killing of Two Lovers, the sound is an essential element of the film and the secret weapon that makes it work so well. Pearce uses everything at his reach to create fear and uncertainty while maintaining the film grounded in constant thematic evolutions.

While the first half of the story has the stress and urgency of films such as War of the Worlds (Steven Spielberg, 2005) or A Quiet Place (2018), the second half slowly evolves into a road-trip film where the threats become more tangible and immediate. The small family starts facing people that become obstacles: a police officer that stops them in the middle of the road, a man that shoots Malik when he is looking for help or white supremacists that go after them. The alien bugs become secondary and now Malik must face human terrors as he tries to maintain Bobby and Jay in safety. They can never catch a break.

While it’s best to maintain the surprises unexplored for an enriching viewing experience, it is safe to say that Pearce maintains the themes of survival, mental health, and family bonds at the heart of the story. The sources of tension change, but the anticipation and stress never go away.

The complicated changes in narration are successfully portrayed by the impressive cast, probably the greatest aspect of the film. Ahmed keeps reminding us that he is one of the best actors working today, offering a tumultuous performance that demands outbursts of emotions. He is sometimes vulnerable, and others toxic, violent and tender, dangerous and protective. Malik is filled with contrasts, and Ahmed portrays every change passionately and accurately.

Aditya Geddada and Lucian-River Chauhan are a delight as Malik’s children. Exhibiting an inherent violence with one another, the relationship amongst themselves and the feelings towards their father change as the story progresses. Scared, spoiled, and sweet, these boys are excellent counterparts to Ahmed’s tortuous interpretation. Chauhan deserves a special mention as the oldest boy that distinguishes what is going on and who tries to become the protector of his father.

Encounter is an exciting and adrenaline-filled film that is uplifted by the performances of the core cast. Pearce, with a fantastical use of sound and image, creates a thriller that is impactful for the way it manages tension and for the skilled way in which it manipulates expectations. Even if the threats are always changing, fear and anxiousness are always present. Encounter offers urgent social messages disguised as adventure and science fiction.