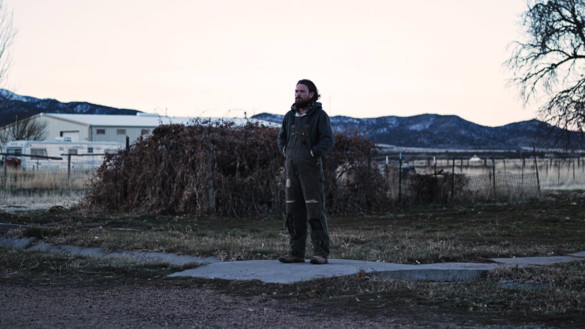 Synopsis: David desperately tries to keep his family of six together during a separation from his wife, Nikki. They both agree to see other people but David struggles to grapple with his wife’s new relationship.

We see a distraught man pointing a gun at two lovers fast asleep. It is evident that he is suffering, waiting for a reaction from the unconscious couple so he can react himself. It is easy to conclude that he may be an ex-lover of hers, suffering as he sees another man next to her in bed. Just as he is about to do something, voices outside the room that arise with the morning dew take him out of his reverie. Are we about to witness a massacre?

The tension of these minutes of The Killing of Two Lovers is just a taste of the emotions and intensity that are about to happen for the next 80 minutes. Written, edited, and directed by Robert Machoian – best known as one half of the directing duo with Rodrigo Ojeda-Beck –, his first solo outing is this family drama set in an unspecified American town (shot in Utah) during wintertime, perfectly reflecting the cold and desolate feelings that surround David (Clayne Crawford), the man with the gun.

David and Nikki (Sepideh Moafi) are going through a rough patch in their marriage. Cleverly enough, Machoian introduces us into their strained relationship once they have separated, without giving any clue of what happened or who was at fault. Now, David is back at his father’s house – not even a mile away from his home in this tiny and deserted town –, dealing with palpable frustration of not being able to be with his family. Meanwhile, Nikki seems to be moving on with a new guy, even though they agreed to give their marriage another try while seeing other people.

The story is told entirely from David’s point of view, a man that is constantly grappling with feelings of frustration and anger – taken out in outbursts of violence when he is completely alone – while trying to keep a serene façade when he sees his small children and teenage daughter. The contrast between his cool exterior – even justifying his wife’s decisions that he evidently disapproves of – and tortured interior is overwhelming and dangerous. In any second this man could explode, and sure enough, in the climactic scene of the film we see his physical resistance to not surrender to his violent instincts.

Tension is the fuel of the movie fed by the uncertainty of David’s future with Nikki. A cloud of despair is over him, not sure what to do to get his life back, and too impatient to let anything and everything flow organically. Every encounter between the married couple is marked by hostility and misunderstanding. In an authentic spin, this film shows a man that seems to only live for his wife and children. The appearance of Derek (Chris Coy), Nikki’s new boyfriend, only complicates everything more, both men displaying toxicity and fragile masculinity while dealing with this challenge.

Considering that we are seeing this story through the eyes of a devoted father, it is easy to sympathize with David and his despair, as well as to question the cruel decisions of Nikki. We do not know what happened before, we just know that he is eager to go back home and that Nikki is resistant, and even maybe falling in love with someone else. In this regard, it is easy to define villains and victims through the skewed perspective we have access to, something that it is not particularly fair to the messiness of relationships, as well as to the complications that lead to separations.

The atmosphere and Machoian’s creativity are vital to understand the ticking bomb that David is. Just as with last year’s Sound of Metal, the sound in The Killing of Two Lovers is vital for its effectiveness. Completely silent at times, the film introduces explosions of noises that hunt David’s mind when he is going through his emotional turmoil. Sounds of gunshots, chains, and hinges intensify David’s instability. Sound designer Peter Albrechtsen created a masterful encounter between state of mind and sound.

Cinematographer Oscar Ignacio Jiménez uses long takes and wide shots to represent the solitude of the place and David’s alienation. The way The Killing of Two Lovers is filmed, it demands from us to be immersed in the moment, in the actions that are taking place right in front of our eyes. Whatever happens in the surrounding area is of no concern to Machoian and to us. The numerous and blurry close-ups demand from us to focus solely on the feelings and emotions of the characters (especially David), with no regard for those that create these reactions, adding a new level of frustration and psychological constraint to the story.

Most of the movie is filmed in a 4:3 aspect ratio, as if we were observing an ancient and distant story, working perfectly for the emotional intensity of the film. However, it transitions into 1:66 for a pivotal and harrowing scene. Jiménez offers us an exhausting visual trip through his muffled colors, intense lens, and changing aspect ratios.

Whether exploring the feeble mental state of David, the bickering between husband and wife, or the explosive ending, The Killing of Two Lovers is an involving experience that offers a strenuous view on the heartbreak of relationships and the efforts of being adults. While its message is heart-breaking, its climax is impressive and provoking, offering an unexpected release of bottled-up tension. Machoian conceived something remarkable.